Thurgood Marshall: The soundtrack of their lives 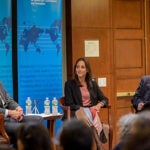 Thurgood Marshall is revered as a titan of the U.S. Civil Rights Movement, the architect of the landmark court case that ended legal segregation in America’s public schools, and the first African-American Supreme Court justice. Yet for five of his former law clerks gathered Wednesday at Harvard Law School (HLS), he was more than that.

For Mark Tushnet, William Nelson Cromwell Professor of Law, Marshall was a messenger of hope and courage to African-Americans who endured the injustices of the Jim Crow South. As a criminal defense lawyer for the NAACP in the 1940s and ’50s, Marshall often traveled to the segregated South to defend black men who were falsely accused of rape and murder in hostile courts packed with all-white juries, in towns with influential Ku Klux Klan members.

“When he came to town to do trials, it was as if Jesus Christ came to town,” said Tushnet, who clerked for Marshall in the ’70s and has written several books about the noted justice. “People would come out to see him. In Oklahoma, kids from an elementary school were taken to the courtroom to see him defending. And the very fact that it was a black man doing a criminal defense, standing up on the stage, it mattered to those kids.”

For Randall Kennedy, Michael R. Klein Professor of Law, who clerked for Marshall in the ’80s, the associate justice was a source of pride, lifting the spirits and the consciousness of black Americans who were treated as second-class citizens.

“I grew up with the name of Thurgood Marshall as part of the soundtrack of my life,” said Kennedy. “He was Mr. Civil Rights. I remember my father talking about watching Marshall argue a case in 1948. What he remembered was that the judges and the opposing lawyers called Marshall ‘Mr. Marshall.’ And that was a big deal given the etiquette of the Jim Crow South, when black men were not called Mister.”

For Martha Minow, former dean of Harvard Law School, Carter Professor of General Jurisprudence, and University Distinguished Service Professor, who also clerked for Marshall, he was the embodiment of a deep commitment to social justice and faith in the power of the rule of law to bring equal rights to all eventually.

“His faith in the rule of law and the legal system was profound, even though he wrote the most searing critique of the bicentennial of the American Constitution I’ve read,” said Minow. “He was not at all naive, but he was someone who modeled for the world that it’s possible to use reason in courts to tear down oppression.”

At the panel discussion held in conjunction with the upcoming release of the movie “Marshall,” which opens in theaters Oct. 13, HLS professors who served as Marshall’s law clerks recalled and explored his life and legacy. Directed by Reginald Hudlin ’83, the film features Marshall as a young attorney in a 1941 criminal case in which he defended a black chauffeur and butler falsely accused of sexual assault and kidnapping by his employer, a white socialite.

The panel was moderated by Tomiko Brown-Nagin, Daniel P.S. Paul Professor of Constitutional Law, director of the Charles Hamilton Houston Institute for Race & Justice, and professor of history in the Faculty of Arts and Sciences, and Kenneth Mack, the Lawrence D. Biele Professor of Law.

When the panelists were asked to talk about Marshall’s personality, they shared smiles of recognition, and went on to tell tales about his larger-than-life presence, his impish sense of humor, and his masterful storytelling abilities.

Minow recalled that when she went for her job interview with Marshall, she was fighting a cold and feeling sick. Marshall recommended that she follow his father’s home remedy. “He said to me, ‘You take quinine and whiskey, and you leave out the quinine,’” said Minow, to laughter in the room.

“He was a formidable person in all respects,” recalled another former clerk, William Fisher, WilmerHale Professor of Intellectual Property Law and faculty director of the Berkman Klein Center for Internet & Society. “He was big, gruff, and impatient with pretense. If we ever got a little bit too forthright, he’d point to the wall and say, ‘I don’t see your name up there signed by the president of the United States?’ He kept us in check.”

Marshall regularly regaled clerks with stories of his life growing up in Baltimore, of his dangerous journeys to the South working for the NAACP, and his tenure on the Supreme Court. Tushnet recalled a story Marshall told in which he said he narrowly escaped being lynched in Tennessee by breathing into a judge’s face to prove he was not drunk. “The judge released him, and he left town,” said Tushnet. “And Marshall, as he tells the story, says, ‘I wasn’t drunk then, but let me tell you, an hour later …’”

As much as the clerks said they relished listening to his spellbinding stories, they treasured the lessons they learned while working in his chambers.

Carol Steiker, Henry J. Friendly Professor of Law and Special Adviser for Public Service, said she developed a lifelong interest in death penalty law during her clerkship with Marshall.

“The death penalty was a big deal in his chambers,” she recalled. “He would tell us stories about early in his career when he represented defendants at trial as well as on appeal in death penalty cases. Mostly they were black men accused of crimes against white victims in the South. And one thing he said often is that he always knew when he had an innocent client because that’s when the jury would sentence him to life imprisonment instead of death. And that really stuck in my head.”

All of the panelists highlighted Marshall’s legacy of advancing the Civil Rights Movement through the law, most prominently in the historic school desegregation case Brown v. Board of Education, in his 1967–1991 term on the Supreme Court, and in his extraordinary and courageous earlier career as a lawyer fighting for racial and social justice in a violent era. Supreme Court Associate Justice Elena Kagan, who clerked for Marshall in 1987–1988, has called him the greatest lawyer of the 20th century.

When HLS student Leighton Watson asked the former clerks whether they thought Marshall would still believe that the legal system, as opposed to activism or politics, was the most effective route to achieving social justice, it was Minow who replied.

“I think that today, the courts are one tool, but they’re very limited for mass social change, for redistributing resources, for changing hearts and minds,” she said. “Thurgood Marshall was strategic, but he was very pragmatic. He would use the tools that would work. He’d use social science if that worked, he’d use experts if that worked, he’d use the media if that worked. That’s what I would recommend, along with his advice, ‘Choose your battles.’ That was his advice, and I think about that every day.”