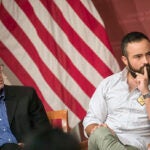 A rich candidate campaigns as a representative of the common man against a shadowy elite, but once in office governs in ways that support and enrich people like him. It happened in Italy with the election of Silvio Berlusconi, and in Thailand under Thaksin Shinawatra. Some critics say it is happening in the United States in the early months of Donald Trump’s presidency.

To understand the phenomenon of populist plutocrats, a Harvard conference on Saturday will host a gathering of analysts who will discuss political leaders from Italy, Thailand, the Philippines, Peru, and South Africa who share at least some of the expressed characteristics.

In advance of the session, the Gazette interviewed Harvard Law School Professor Matthew Stephenson, who is one of the organizers and who researches anticorruption from an international and comparative perspective, about how the gathering aims to help people learn lessons from around the world about how populist plutocracy works. Co-sponsored by Harvard Law School and the Stigler Center for the Study of the Economy and the State, the event is free and open to the public. It will take place  from 9 a.m. to 5 p.m. at Milstein West AB.

GAZETTE: You are organizing a conference called “Populist Plutocrats: Lessons from Around the World.” What led you to focus on this theme?

STEPHENSON: To be candid, the conference was very much motivated by my concerns about the Trump presidency. President Trump, especially during the campaign, managed to effectively deploy anti-elite rhetoric, positioning himself as a representative of the common people who would stand up to the well-connected elites. Yet he’s governing in a way that, based on the early indications we have, seems to resemble “crony capitalism” at best, and possibly something more sinister.

I felt like this was a movie I’d seen before: the politician who campaigns as a “man of the people” but who ends up using the power of office mainly to benefit himself and a small circle of cronies and family members. This may well be unprecedented in modern American political history, but it’s not at all unprecedented in the world. Silvio Berlusconi in Italy is one example who seems to fit this pattern. So are Thaksin Shinawatra in Thailand and Joseph Estrada in the Philippines. There are others, too.

The conference is motivated by the initial hypothesis that Donald Trump is sufficiently similar to these other politicians, who for lack of a better term we’re calling populist plutocrats, that we can learn something useful by comparing them.

GAZETTE: Can you say more about why you think there are similarities between Trump and these other populist plutocrats you mentioned?

STEPHENSON: My initial sense — and again, this is a preliminary hypothesis, not a firm conclusion — is that there are many similarities. Berlusconi, Thaksin, Estrada, and Trump were all extremely wealthy before they entered politics, yet they all positioned themselves as political outsiders running against the traditional elite. Many of their hard-core supporters felt themselves disadvantaged with respect to the elite. And these politicians, despite their enormous wealth, all seemed to find ways to tap into that. Another similarity between Berlusconi, Thaksin, and Estrada, and, I fear, Trump as well is their willingness to use the power of public office to enrich themselves, their families, or their cronies.

GAZETTE: On that subject, what are the reasons for your concerns about potential corruption in the Trump administration? You’ve been keeping track of your concerns on the Global Anticorruption Blog you run.

STEPHENSON: On the blog, we keep a running list of credible but not necessarily proven allegations of instances in which Trump, his family, or his close associates are using the presidency for private gain. There are four categories we’re tracking. First, there are ways in which the U.S. government has to pay Trump businesses directly: the Secret Service or the Defense Department needing to rent space in a Trump property, hiring Trump airlines to fly his family on various trips, and so forth. This costs U.S. taxpayers money, but it’s one of the less destructive forms of potential profiteering by Trump. The second category we track includes various inappropriate attempts to use the power of the presidency to promote the Trump brand and Trump companies: incidents like senior White House adviser Kellyanne Conway saying that we should buy Ivanka Trump’s products, like government websites advertising Mar-a-Lago and promoting Ivanka Trump’s book, and so forth. Here too the behavior is ethically problematic but unlikely to have major negative consequences for our government, at least not directly.

GAZETTE: There are two other categories that you consider more troublesome. Could you tell us why?

STEPHENSON: The third category involves cases where there’s evidence that Trump’s policy decisions or proposals are being distorted by his business interests. Trump proposed a budget that cuts Department of Housing and Urban Development grants and subsidies, but exempts a special program from which Trump benefits financially. Trump won’t increase quotas for most visa categories, but does do so for a particular category of workers that his companies want to hire. Some have also pointed to the fact that his controversial travel ban applies to individuals coming from some but not all majority-Muslim countries, and the ones not on the list are also the ones where he has significant business interests — though of course there are other explanations.

GAZETTE: Could you tell us more about the fourth category, which includes Trump’s potential conflicts of interest, that concerns you the most?

STEPHENSON: The fourth category consists of instances where outside interests, including foreign governments, may try to influence U.S. policy by taking actions that benefit companies associated with Trump and his family. There’s evidence that both domestic interest groups and foreign governments believe, or have been led to believe, that if you want to influence the president you need to ingratiate yourself by doing business with him. We see lots of them booking events at a Trump hotel or Mar-a-Lago resort.

I want to make sure I emphasize that many of these examples are speculative, and there are more innocent explanations for many of the troubling reports. But one of the reasons that I think it’s important to pay attention to the seemingly less consequential categories, like using the presidency to promote the Trump brand or renting hotel rooms to foreign diplomats, is that these other things demonstrate an attitude toward government that might well carry over to other, more consequential policy areas. That’s why I think international comparisons are so useful to give Americans a sense of what should we look for and what the danger signs are.

GAZETTE: What do you hope people can take away from the conference?

STEPHENSON: One purpose is simply to stimulate more systematic and rigorous research on this political phenomenon. But of course as we’ve been mainly discussing in this conversation, I particularly hope that Americans can learn something useful about our current political situation from looking more broadly to the rest of the world. We always need to be careful to acknowledge that every country and every situation is different, and we can’t be overly facile in drawing lessons. But I do hope that by examining other countries, we can deepen our understanding of what’s happening here, or what might happen here.