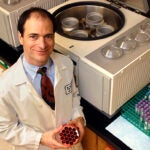 Researchers at the Harvard John A. Paulson School of Engineering and Applied Sciences have developed a simple device that mimics complex birdsongs. The device uses air blown through a stretched rubber tube to re-create birdsongs found in nature, including those of zebra and Bengalese finches. It was developed by L. Mahadevan and his lab group. Mahadevan is the Lola England de Valpine Professor of Applied Mathematics, of organismic and evolutionary biology, and of physics.

The group found that the inherent complexity in bird songs might actually be the result of a simple, controllable instability in the structure of the specialized organ used to create song, known as a syrinx. Their research suggests that birds may have harnessed the physical properties of a soft material to produce and control their songs; thus, evolution may have found simpler ways to create complex behaviors.

The research was published recently in the Journal of the Royal Society Interface, and was co-authored by Aryesh Mukherjee and Shreyas Mandre, both former group members of the lab.  Mahadevan is also a core faculty member of the Wyss Institute for Biologically Inspired Engineering at Harvard University.