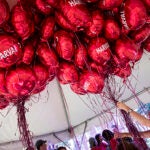 The Harvard community celebrated the halfway point of the Richard A. and Susan F. Smith Campus Center construction project on Aug. 16 with a traditional topping-off ceremony. The ceremony featured the signing of a beam that will be installed inside.

The renovations are expected to be finished during the fall of 2018.

“This is a transformative renovation project, and we are pleased it is proceeding smoothly,” said Harvard Executive Vice President Katie Lapp. “The Smith Campus Center will be a welcome addition to the Harvard University campus, providing a much-needed central convening space for both the University community and our neighbors in Cambridge.”

Part of the Harvard Common Spaces initiative, the renovations include creation of indoor and outdoor community spaces, lounge and study areas, and event and meeting rooms. Planned sustainable elements consist of interior green wall landscaping and roof gardens, while the redesigned entrance on Massachusetts Avenue will feature a plaza with café seating, trees, and chess tables.

The building was designed in the late 1950s by Graduate School of Design Dean Josep Lluís Sert and was renamed in honor of renovation donors Richard A. and Susan F. Smith during the 2013 groundbreaking ceremony.

In an interview with the Harvard Gazette, Richard Smith shared his hope for the building’s role in campus and community life.

“Other universities … have great campus centers, and they do a wonderful job in enabling students and the whole community to associate with each other in activities and to make friends and to find a place to spend an hour between classes,” Smith said. “Of all the institutions one can think of, Harvard has been the leading developer of the future leadership of this country, if not the world. To be associated with it has been a great privilege, and to support it in a meaningful way … will be a capstone in my relationship with Harvard.”