First interned, then left behind 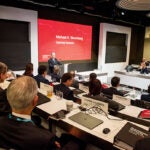 Japan’s attack on Pearl Harbor in 1941 drew the United States into World War II and spawned a massive wave of shock and fear across the country. It also prompted the U.S. government to round up and send more than 100,000 Japanese-Americans to internment camps.

Scholars have long studied this dark chapter in American history and its denial of basic freedoms, but until recently little was known about the long-term economic effects on the lives of the people who were interned, their businesses, homes, and possessions hastily left behind.

Harvard economist Daniel Shoag and Nicholas Carollo, a Ph.D. candidate in economics at the University of California, Los Angeles, who wrote the paper “The Causal Effect of Place: Evidence from Japanese-American Internment,” found that the economic consequences of confinement lingered among internees even 50 years later, and varied greatly on where they were placed.

Between 110,000 and 120,000 Japanese-Americans, 70 percent of them born in the United States, were forced to leave their homes on the West Coast and incarcerated in makeshift camps in desolate areas until after the end of World War II. When the Japanese Exclusion Act was revoked in 1945, the inhabitants were released, but their economic prospects were markedly, and forever, changed.

“Internment is a tragic period in American history,” said Shoag, associate professor of public policy at Harvard’s Kennedy School of Government. “There was some random component to where people were imprisoned, and yet these randomly assigned locations had a big impact on people. It affected the lives of the internees in every single economic outcome you can think of — income, education, housing, socioeconomic status, all sort of things, and their descendants as well.”

Prior to the war, most Japanese-Americans had similar incomes and educational backgrounds, but after they were assigned to 10 camps across seven states — Arizona, Arkansas, California, Colorado, Idaho, Utah, and Wyoming — their economic fates changed. All internment camps were prison-like compounds, with barracks, watchtowers, and barbed wires, but some were close to wealthy regions and others to depressed areas.

“The long-term impact of being put in a poorer place was large and dramatic,” said Shoag.

The economic effects of internment could be measured across generations, the study found, and affected the internees’ children. Their economic outcomes affected the values they held as well: Those from better-off areas tended to be more assimilated into U.S. society, and were more materialistic and optimistic, said researchers, based on survey data from the Japanese-American Research Project (JARP), a three-generation study (1890-1966) directed by the late UCLA sociologist Gene Levine.

Those sent to poorer areas found it harder to get ahead. Many of them failed to get higher education, and their children’s futures were compromised, said Shoag.

“One of the things we look at is what happens when you’re put in a hard place,” he said. “How much does being randomly put in a place with low mobility affect the cross-generation correlation? We found that the next generations suffer.”

Researchers used detailed administrative data from the U.S. government, which helped to track nearly 90 percent of the surviving internees during the process of making restitution payments. With data spanning five decades, researchers were able to measure outcomes for the internees, their children, and their grandchildren. The researchers found that in 1980, nearly 40 years after the Japanese-Americans were first interned and 35 years after they were released, those who had been placed in the poorest camp (Rohwer, in Arkansas) still earned 17 percent less than those placed in the camp in the most affluent region (Heart Mountain, in Wyoming).

The findings have broad implications for immigrants and refugee settlements. Policymakers and governments officials need to understand the importance of location assignments for the economic futures of immigrants, said Shoag.

“It’s important for how we think about people’s placement, from a policy angle,” he said. “If we have refugees with similar incomes coming in, let’s say some to Boston and others to Flint, well, the ones in Boston are going to make more money and get more education than those in Flint. This is an important consideration not just from an economic point of view, but also from an urban economics model.”

The research found that many internees chose not to go back to their original homes on the West Coast, both because they feared racial enmity and because of housing shortages. Many wound up remaining in communities near their former internment camps.

“People do get stuck,” Shoag said, “and this has consequences for future generations.”

Shoag said government officials should keep in mind the long-term effects of any policy involving placement or relocation when they deal with immigrants or refugees resettlements. The location can help to determine their future.

“There have been discussions about allowing refugees into the country, maybe sending them to depressed parts of the country to bolster population,” he said. “But when you send a refugee family to a low-income place, that is going to have a huge impact on them, their families, and their future generations.”