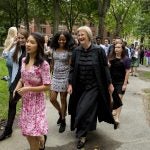 It’s a time-honored tradition at Memorial Church, a brief service of reflection, song, and prayer that unfolds early weekday mornings during the fall and spring semesters. For close to 400 years, some students, faculty, and staff have reserved 15 minutes to contemplate the past and the future and to hear from a member of Harvard’s community.

On Wednesday, that community member was Harvard President Drew Faust.

Faust, who has opened the service to begin the academic year for the past decade, stepped to the dais at intimate Appleton Chapel to deliver what may have been her final morning remarks there, remarks that were perhaps also her most poignant. Faust first asked listeners to remember and to send their wishes to those in Texas and Louisiana affected by devastating floods and to think about how to help.

“Think of how each of us can do something to help in the days and weeks and months that come as those communities face what will be a long and difficult and trying process of bringing their lives back in order,” said Faust.

With the remainder of her brief time, Faust reflected on events that have sparked bitter protests and national concern, and issued a clarion call to her audience.

She recalled the bigotry and hatred that have roiled the country recently, including the violence in Charlottesville, Va. Such events, she said, are “reviving the most shameful episodes of the past and foregrounding the very worst of what we have been and regrettably still are as a nation.”

Growing up in then-segregated Virginia, Faust, who is also Harvard’s Lincoln Professor of History, watched as the state tried to uphold discrimination by closing public schools rather than complying with the U.S. Supreme Court’s ruling to desegregate in Brown v. Board of Education in 1954. Over the last 50 years, Faust said, she watched Virginia “slowly but significantly change,” integrating it schools and universities, electing an African-American governor, and even voting for the nation’s first black president.

“But on Aug. 12, I saw white supremacy resurgent, setting its sights on a university town with values like our own to mount its challenge and advance its evil and cruelty,” said Faust.

At Harvard, scholars investigate the roots of such bigotry to understand and combat it, said Faust. But simply studying the problem isn’t enough, she added, urging her listeners to speak out and take a stand against hatred, racism, and exclusion. 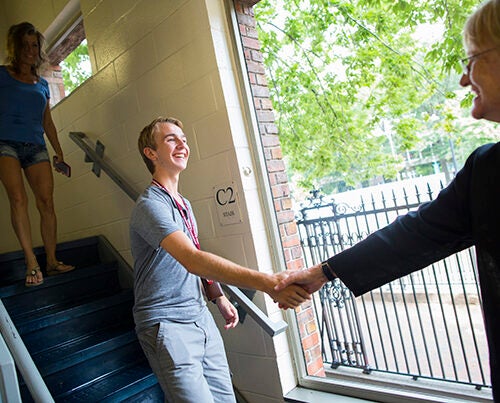 A letter leads to Harvard

Michael Medaugh, who in seventh grade exchanged notes with Drew Faust, worked hard and is now a freshman

“We must condemn the racism that feels free to speak in a way it hasn’t for nearly half a century. We must denounce the Nazism and anti-Semitism that my father and so many others of his generation risked their lives to defeat. We must affirm the full citizenship of LGBTQ Americans, including their right to qualify for military service. We must use the illumination of education to mitigate hatred and violence. Prejudice is taught and nurtured and modelled. Tolerance and inclusion can be as well.”

Harvard, Faust told her listeners, adheres to a core set of values that must be continually embraced: the pursuit of truth, the belief that learning enhances human capacity, the certainty that every member of the community can contribute to the common good, the need for diversity, tolerance, and inclusion, and the firm understanding of “the obligations each of us bears toward one another and toward something greater than ourselves.”

“These values are fundamental to all we do,” Faust concluded. “We have been reminded that we cannot take them for granted. We cannot assume that our progress toward realizing them cannot be reversed. Let us rededicate ourselves to their defense.”

“Life is short. Time is filled with swift transition. So make haste to be kind,” said Walton. “Be quick to love. Speak the truth every day. Be quick to compliment and slow to criticize, and if you do so, do so constructively. For if we do these things, we might begin to approximate what it means to do justice, love mercy, and walk humbly before our God.”