A letter leads to Harvard 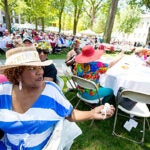 Michael Medaugh, who in seventh grade exchanged notes with Drew Faust, worked hard and is now a freshman

In seventh grade, Michael Medaugh’s class was given an assignment: Write a letter to someone famous. Most of his classmates chose NFL players or Hollywood actors.

“I never thought I would hear back,” said Medaugh, who through his childhood and teen years wanted to attend the College and even for years made “Harvardbound” his computer password. “It was very inspirational, receiving that personal letter and a brochure from Harvard.”

Medaugh finally met Faust in person on Tuesday while moving in as a freshly minted member of the Class of 2021.

“Michael has shown remarkable spirit and determination in pursuit of his dreams,” said Faust. “I am pleased to welcome him — and all of his classmates in the Class of 2021 — as members of the Harvard community this September. We eagerly anticipate the contributions they will make as they shape the future.”

After his Harvard acceptance, Medaugh wrote Faust a postcard thanking her for responding to his long-ago letter. “Through the years of growing up, I have kept that letter, still at the foot of my bed,” he wrote. “It served as a subtle reminder of why I had to work ever harder, study ever more, and be the best I could.”

Medaugh grew up in the small Pennsylvania town of Reeders, and said he is the first person from his high school to attend Harvard. His family and teachers encouraged and nurtured that longtime dream.

“When I was a little kid, there was a romanticized view of Harvard, from the media and the movies to my mom and my teachers, as the best college in the world,” he said. “It’s always been up there as my greatest goal and what I’ve most strived for. I am so thrilled to be here.”

With interests spanning politics, neuroscience, and medicine, Medaugh looks forward to exploring the breadth of knowledge the College has to offer. Neurobiology is a particular passion, sparked by his participation in the Brain Bee Competition as a high school student. Medaugh competed in the bee at the national level, placing 11th.

“It was basically all about introductory neuroscience,” he said. “They give you a few textbooks to read, and you have to look at MRI scans, patient diagnoses, things like that.”

Helping Medaugh move into his dorm were members of his family. Stephanie Medaugh, his mother, is also excited about what his future holds.