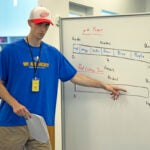 Jazz virtuoso Esperanza Spalding and renowned flutist Claire Chase have been appointed professors of practice in the Music Department.

Beginning in the 2017–18 academic year, the two artists will teach courses that cross musical styles and genres. Chase will start to teach in fall, Spalding in the spring.

“The appointments of Claire Chase and Esperanza Spalding have great symbolic importance to our department,” said department chair Suzannah Clark. “They signal a commitment to the creative performing arts as a core feature of liberal arts education in the 21st century, and position the department for the musical landscape of the future, while providing Harvard students — and all of us — with bold models for how to live as artists in the world.”

Spalding, a bassist, singer, and songwriter, has won four Grammy Awards. She has five solo albums and is known for her unique blend of jazz, rock, funk, soul, and R&B, along with influences from Brazilian music.

After graduating from the Berklee College of Music in 2005, Spalding was hired as one of the school’s youngest-ever instructors at age 20. Her numerous prizes include an NAACP Image Award for Outstanding Jazz Artist, a Smithsonian American Ingenuity Award for the Performing Arts, and a Jazz Vanguard Award from the American Society of Composers, Authors and Publishers (ASCAP) Foundation.

Spalding’s voice has carried beyond music. She made a video in 2013 called “We Are America” about Guantanamo Bay and prison, and performed this past winter at the Peace Ball at the National Museum of African American History and Culture in Washington.

“Esperanza is a superstar performer: Not only does she sing and play multiple instruments, she’s multilingual and writes her own lyrics, which are often witty and wry and always assuredly profound and perspicacious,” said Clark. “There is a great thirst amongst current students at Harvard for courses in songwriting and music video, in both improvised and composed formats. Esperanza brings a formidable experience and dazzling range of stylistic capacities in these areas.

Chase has performed more than 100 world premieres for the flute throughout the Americas, Europe, and Asia. She has a reputation for being a fearless creator with a flair for intricately complicated repertoire.

Co-founder of the entrepreneurial and educational International Contemporary Ensemble, she has been a critical voice for musical innovation across genres. Winner of this year’s Avery Fisher Prize, Chase has twice been honored with the Chamber Music America ASCAP Award for Adventurous Programming. Among her current performance projects is “Density 2036,” a long-term commission for new flute music over the next two decades.

Said Clark: “It’s absolutely fitting that Claire’s legacy of commissioning new works began as an undergraduate at Oberlin after she used prize money to commission a work for flute. Harvard is filled with students who are eager to experiment with new musical initiatives and they will be able take courses from a key player who is at the forefront of creating new models for socially relevant, artist-led collectives in avant-garde music.”