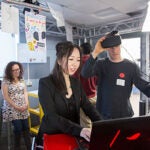 Sampling innovations in teaching and learning

President Trump’s repeated insistence that no one in his campaign was aware of or involved in Russian interference in the 2016 election is now in doubt after the president’s eldest son published emails that not only confirmed a June 2016 meeting between top campaign officials and Kremlin-connected Russians, but also hinted at an offer of access to information potentially harmful to Hillary Clinton.

Though the president and his son have characterized the meeting as a polite sit-down to chat about opposition research, many intelligence, Russia, and legal analysts say the gathering appears to have been designed to gauge the willingness of the campaign to accept covert help. Such an approach is typical of Russian intelligence operations, experts say.

In an interview, Mowatt-Larssen discussed the Trump Tower meeting against the backdrop of the ongoing probe led by special counsel Robert Mueller into Russian meddling in the 2016 election.

GAZETTE: In a recent piece in The Washington Post, you said the Trump Tower meeting had all the hallmarks of a carefully orchestrated Russian intelligence operation. From your vantage point as a former intelligence officer, when you consider what is currently known about Russian meddling in the election, what do you see?

MOWATT-LARSSEN: It has become clear that the Russian intention was to attempt to enter into a collaborative or cooperative relationship with the Trump campaign in order to sabotage Hillary Clinton’s campaign to their mutual benefit. To that end, the Russian government employed hacking activity to collect information and then embarked on an ambitious intelligence operation to leak that information to Trump’s advantage and to Clinton’s detriment. The question that remains, and is most important to answer, is did the Trump campaign willfully accept this assistance from the Russian government and enter into a conspiracy to benefit the campaign?

The Mueller investigation should be examining the three key questions, among others, that could get at the Trump campaign’s intentions. First, why was the meeting not reported? Second, what happened to the documents that the Russian lawyer, Natalia Veselnitskaya, reportedly left behind concerning Hillary Clinton’s alleged illegal donors? Third, can anyone at the meeting confirm who in the Russian government tasked and backstopped the Russian emissary’s approach to the Trump campaign in June [2016]?

GAZETTE: From the Russian side, what would be the intelligence strategy behind setting up such a meeting?

MOWATT-LARSSEN: When you make a recruitment approach, as it looks like the Russians attempted to do through this June 9 [overture] to the Trump campaign, there are three things that can happen and two of them are bad. The good outcome is the person you’re approaching says yes, I want to work with you; the second outcome is they say no, and they’re outraged with this inappropriate approach; and the third outcome is not only do they say no and it’s inappropriate, but they report it to the authorities immediately, to the FBI in this case. That would have two negative impacts on the broader meddling campaign. No. 1, it would compromise what they were trying to do to the investigators who were trying at that time to determine what was going on. And No. 2, it would make the effectiveness of their overall campaign much less direct because it would mean that they were working with an unwilling conspirator as opposed to someone who was either tacitly or explicitly joined in on the effort.

GAZETTE: How does the Russian 2016 election interference compare to past intelligence operations against the U.S. in terms of its success?

MOWATT-LARSSEN: I would say it’s the most consequential Russian intelligence operation in my lifetime in terms of the attempted scope of their intention to penetrate our domestic politics and influence an American election. I can’t recall a precedent where they were that ambitious and that aggressive in pursuing that kind of goal. It’s hard to imagine that they would have done so with a completely unwilling partner.

GAZETTE: If some in Trump’s inner circle were compromised, how much damage to U.S. intelligence is this having, and in what ways?

MOWATT-LARSSEN: Unfortunately, just the mere suspicion that there might have been willful cooperation between Trump associates and the Russians creates concerns in the intelligence community that they can’t trust the president. That has deep implications on the necessary support that intelligence needs to provide to the president.

GAZETTE: If they don’t feel confident in the president, what effect does that have?

GAZETTE: Why hasn’t the U.S. been able to squelch the effectiveness of tried-and-true espionage techniques from the KGB playbook like kompromat, dezinformatsiya, provokatsiya?

MOWATT-LARSSEN: The Russians have, perhaps, placed a greater emphasis on the aggressive use of the hybrid means or the asymmetric means that are emerging in the intelligence world, most notably cyber tools, and integrated those tools effectively into their classical espionage human means. Their motivations, frankly, are greater than U.S. motivations to incorporate these things in countering their adversaries, in part because the Russians are weaker than the United States. Second, the U.S. has more legal barriers to conducting some of the same activities and responding to the Russians in kind.

Typically, we don’t necessarily respond in a tit-for-tat manner. In classical espionage, that tends to be the case, [but] in the cyber world, I don’t think we see established rules of the game in how we respond to attacks on one another. It’s important to bear in mind that the Russians are attacking us in certain areas, and certainly they regard the U.S. as having attacked them in other areas. It’s not a case of the Russians utilizing cyber means and the U.S. is standing by doing nothing.

GAZETTE: So how do you expect the U.S. intelligence will respond to Russia?

MOWATT-LARSSEN: If I were advising the U.S. government, my first piece of advice would be not to start with the question of how do we retaliate but how do we get to a position [where] there’s less destructive behavior being conducted by both sides against one another’s interest. It’s not a popular idea right now to suggest that the U.S. and Russia, despite everything that’s happened, need to sit down and talk this out. We do need rules of the game. We need to end embarking on a course that leads to cyber mutually assured destruction. We need to lower the level of confrontation and we do need to open up lines of dialogue.