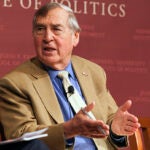 In Harvard visit, Gorsuch, Breyer see stability in how cases are adjudicated

The mood was festive, rather than disputatious, on Friday evening as Supreme Court Associate Justices Stephen G. Breyer, J.D. ’64, and Neil M. Gorsuch, J.D. ’91, sat down to discuss “the rule of law.”

The conversation, moderated by Jeffrey Rosen ’86, president of the National Constitution Center in Philadelphia, capped a Harvard Marshall Forum dinner in the Harvard Art Museums’ courtyard, celebrating the 70th anniversary of the trans-Atlantic scholarship, which Breyer won in 1959 and Gorsuch did in 1992. And although both justices spent some time recalling their experiences as Marshall scholars, in his first public appearance since joining the court in April Gorsuch dropped some intriguing hints about his views of the law and the role of the court.

Speaking of the traits shared by the British and U.S. legal systems, the new justice stressed the importance of law and the primacy of the court. Referring to a “common heritage,” he cited the shared “sense that judges can safely decide the law without fear of reprisal.” This holds true, he said, no matter who is the plaintiff or defendant, as he added that in our system “the government can lose a judgment in its own courts and accept that judgment.”

Speaking a day after President Trump called for the Supreme Court to review the lower court decision to block his executive order on immigration, Gorsuch’s words took on extra weight as he said: “That’s how we resolve differences in this country.”

Both justices stressed the importance of the general acceptance of rule of law, as well as the civility of the court. The justices shake hands before ascending to the bench, explained Gorsuch, who described the institution as “just nine people in polyester black robes.”

“Nine people appointed by six presidents,” he noted. “We’re unanimous about 40 percent of the time.”

The exceptions are notable, but even so the rule of law holds. Breyer, for example, brought up Bush v. Gore, which decided the 2000 presidential election. “It was wrong, in my opinion,” the justice said. “But people followed it. They did not go out … and shoot other people.”

Comparing the British and U.S. systems, Gorsuch noted the similarities, stemming from the Magna Carta, in that both are adversarial and based on the notion of “certain human rights” and “limited government.”

In terms of differences, Gorsuch noted the American system of judicial review, which allows courts to strike down existing law. Some British justices, he said, find this “very worrisome,” adding that this possibility “may be worrisome to some here” as well.

He later discussed how only small a percentage of the cases (roughly 300,000 annually) that come before the Supreme Court ever make it onto its docket of 80 or so, “in a good year.”

Following an acknowledgments of the work by moderator Rosen (a Marshall scholar in 1988) with the nonpartisan Constitution Center, both justices briefly discussed the role of this foundational document. Gorsuch noted, “Our Constitution was aimed at preserving, not preventing, certain civil liberties.”

To an audience of dignitaries and fellow Marshall scholars, the justices spent much of the hourlong conversation in fond reminiscence. Both discussed having their worldviews broadened by the scholarship, which for both was a first overseas experience. Both have since married British women, Gorsuch meeting his future wife in Christ Church Hall at Oxford. This prompted Breyer to note, “I too have married a British woman, and she’s beautiful, but it’s not the same one.”