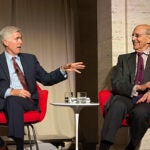 At a time when American commitments to major global institutions and agreements are a hot issue around the world, the Harvard Marshall Forum celebrated the legacy of one of America’s greatest humanitarian outreach efforts: the Marshall Plan, $13 billion in U.S. aid to a faltering Western Europe after World War II.

The forum is the annual gathering of the Association of Marshall Scholars, a charitable organization composed of program alumni who support the association.

Harvard Law School Dean Martha Minow welcomed guests to campus Saturday for a full day of talks and panel sessions by experts in diplomacy, law, and history. “For Harvard Law School to play a part as Harvard University collaborates with the Marshall Forum and the Association of Marshall Scholars to mark the 70th anniversary of the Marshall Plan is a special honor,” said Minow.

Minow was joined in welcoming guests by Fredrik Logevall, a foreign relations expert who is the Laurence D. Belfer Professor of International Affairs at Harvard Kennedy School and a professor of history. While the extent of the plan’s contribution to Europe’s recovery is debated by historians, he said, there is no doubt that “the plan that Gen. [George] Marshall laid out was strategically sound, deeply altruistic, and highly effective. More than that, it was a signifier of the U.S. as a beacon of generosity and moral leadership.”

Although concern for the future of trans-Atlantic relations was palpable as modern Europe confronts a host of problems, guests and speakers highlighted the Marshall Plan as a shining example of the transformative power of diplomacy.

“I can hardly think of a moment more fitting for us to look at the inspiring examples history has to offer, and the Marshall Plan is such an example,” said Dutch Foreign Minister Bert Koenders, who spoke during the morning session. “Today is an opportunity to think about what Marshall’s legacy means for all of us, to see what we can still learn from it, and most of all, to explore the spirit from which it emanated.”

Former U.S. Secretary of State Madeleine Albright, who was a panelist during the morning, was honored with the Marshall Medal. The medal, which is awarded on significant anniversaries in the life of the scholarship program or of the Marshall Plan itself, is given to individuals of distinction whose contributions reflect Marshall’s legacy.

“I am deeply honored by this award,” said Albright. “George Marshall was a secretary of state whom I admired greatly … We need to remember what Secretary Marshall has said and what other presidents have said. I am here to testify to the fact that America is stronger when we are part of the global community.”

Using the plan as a framework for the day’s discussion, the forum’s agenda explored aspects of diplomatic relations between nations. During a panel on human rights and humanitarian aid, speakers debated the effectiveness of national and international institutions, such as the United Nations and NATO, to dispense aid and to support the self-determination efforts of developing countries.

Other topics included the role of the United States in the international community; the diffusion of political power across countries, individuals, charitable foundations, and terrorist organizations; and the future of economic and technological globalization.

In her keynote speech, University Professor and Marshall Scholar alumna Danielle Allen shared the impact that the scholarship had on her life and argued for the value of a learning partnership with the United Kingdom. Its traditions, constitutional rights, and decision-making through parliamentary debate provide the world’s longest-lived example of free institutions, she said.

Allen went on to suggest that the lessons taught by the Marshall Plan are needed today more than ever.

“We need to lift back to our shoulders the tools that Marshall gave us: an understanding of politics as a movement through argument toward stable and effective action through agreement; the capacity to analyze the geopolitical and geoeconomic shifts in the world in relation to the emergence of hunger, poverty, desperation, chaos, and their opposites; and, finally, a recognition that our strategic interests embrace a moral interest in the economic, social, and political conditions out of which free institutions can emerge.”