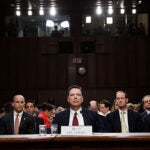 A woman who was raped during the genocide became caregiver for her younger sisters. Another helped create an association to assist widows and orphans after her own husband, parents, and siblings were killed. A third became a grassroots activist who took part in efforts to persuade Rwandan fighters in Congo to return home. A fourth was a lawyer who helped rewrite the country’s constitution.

These are some of the 90 profiles in “Rwandan Women Rising,” a new book by Swanee Hunt, a former U.S. ambassador to Austria and the Eleanor Roosevelt Lecturer in Public Policy at the Kennedy School of Government. Filled with testimonies gathered since 2000, the book highlights the key roles played by women, from activists to entrepreneurs to lawmakers, in rebuilding the country following the 1994 genocide.

“In the many books I had read on Rwanda, women are mostly mentioned as victims,” said Hunt, just back from a trip to the country to discuss the book. “The women I interviewed debunk that.”

The genocide in Rwanda was perpetrated by the Hutu majority government against nearly a million Tutsis. In a stunning reversal, the country has become one of Africa’s most stable, with a fast-growing economy, thousands lifted out of poverty, and advances in health care and education, notwithstanding accusations of despotism against President Paul Kagame, who has been in power since 1994.

Rwanda is also leading the way in ethnic reconciliation and gender equality in politics. Women made up 70 percent of the post-genocide population, and they stepped into the ensuing chaos and power vacuum, starting groups to help widows and orphans meet basic needs such as shelter, food, and schooling. Soon came legislation supporting women’s and children’s rights, including a 2003 law mandating that 30 percent of parliamentary seats be reserved for women. Rwandan women currently hold 49 of 80 seats in parliament, a percentage unmatched internationally, according to a 2017 report by the Inter-Parliamentary Union.

How Rwandan women rose from hardship and grief to lead their country’s rebirth is at the heart of Hunt’s book. The author mixes profiles with her own analysis to portray a model of peace, security, and leadership.

“Most women hadn’t been killed, they had been raped,” said Hunt. “They had seen the devastation. They had seen their husbands hacked to death right in front of their eyes. And so afterwards, they had to bury the bodies.”

Examples of strength and resilience among Rwandan women are plenty, but Hunt said she owes special debts of inspiration to Fatima, a woman who died of AIDS contracted from soldiers who raped her, and the late Aloisea Inyumba, who served as executive secretary of the National Unity and Reconciliation Commission.

“Inyumba was my teacher and Fatima is my conscience,” Hunt said. “Inyumba taught me to listen. As the head of the reconciliation commission she traveled across the country to listen to women and put hundreds of Tutsi orphans in care of Hutu families.

“Fatima told me before she died, ‘I’m dying soon, and I don’t want my story to die with me.’ And to me that became an imperative. I had a responsibility to tell their stories.”

Hunt’s tenure as an ambassador in Austria during the Bosnian war helped foster her belief in the importance of women in securing peace in countries devastated by ethnic conflict. After departing Europe in 1997, she became the founding director of the Women and Public Policy Program at the Kennedy School, and two years later she launched Inclusive Security, an organization devoted to promoting the advancement of women in the world. She first traveled to Rwanda for a conference in 2000.

“I saw the end of the Bosnian genocide and the peace negotiations, and there were no women involved in the negotiations,” said Hunt. “I came to believe firmly that you have a different peace agreement if you have women around the table. In Rwanda, women have gotten a place at the table, and the story is what has happened when they were at the table.”

Ideas about Rwanda are changing. In class, Hunt notices that when she asks students what country has the highest percentage of women in parliament around the world, somebody comes up with the right answer after the fourth or fifth try.

Rwanda’s strides in women’s leadership represent a model for the rest of the world, said Hunt, and in particular for the United States, which ranks No. 101 on the list by the Inter-Parliamentary Union. Women hold 84 of 435 seats in the House of Representatives and 21 of 100 seats in the Senate.

“The U.S. is probably the country in most need of lessons from Rwandan women,” said Hunt. “But we all can learn from them.”