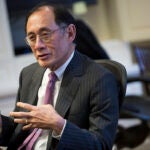 Khalil Abdur-Rashid, an adjunct professor of Islamic studies at Southern Methodist University and co-founder of the Islamic Seminary of America, has been appointed Harvard’s Muslim chaplain, the University announced today. He will begin his role on July 5.

“Khalil brings a remarkable combination of skills to the Harvard community. He has a deep knowledge of Islamic sciences, combines academic strength with experience as an imam and as a social worker, and is strongly grounded in the culture of the United States and of the U.S. Muslim community,” said Ousmane Kane, professor of Islamic studies, who chaired the search. “Beyond his skills and experience, he is a warm and welcoming person who exudes a sense of caring and of optimism. Khalil will provide much-needed support to Muslim students across the University and, like other chaplains, he will work not just with his own faith group but in many ways within our broad community.”

Prior to joining Southern Methodist, Imam Abdur-Rashid was the first paid Muslim programming associate at Columbia University, serving the religious and spiritual needs of Muslims students, faculty, and staff there and at Barnard College. In this role, he helped to organize speaking and lecture events for all students, and to lead Common Meals, a weekly dialogue program to bring together Columbia community members from a variety of faiths and backgrounds to discuss issues of leadership, current events, and philosophy. During that time, he also served as a special adviser to the New York City Police Department on Muslim affairs. He spoke out publicly against the profiling of Muslims in the city and on campus.

“When Muslim students come to campus, they are all at different parts of their spiritual journeys, and for some it can be the first time they are exposed to certain things that may lead them to question or confront parts of their identity,” said Zarin Rahman ’18, president of the Harvard Islamic Society. “Having a chaplain like Khalil, who is well-versed in both the tradition of Islam and the transformative nature of this particular time period, is crucial to helping students handle this change and answer any questions that they may have along the way.”

Abdur-Rashid holds a bachelor’s degree in social work from Georgia State University, and a master’s in Middle East studies and Islamic law and a master’s of philosophy in Islam and Middle Eastern studies, both from Columbia. He earned his Islamic specialized license (ijaaza) in Islamic family law at Dar al-Mustafa Seminary in Tarim, Yemen, and an Islamic advanced doctorate (ijaaza ilmiyyah) in Islamic legal sciences and ethics at the ISAR Seminary in Istanbul. He is working toward a doctorate in liberal studies with a focus on American Muslim identity formation, and is fluent in Turkish and Arabic.

“I am deeply humbled and excited to join the Harvard community as the new Muslim chaplain,” he said. “I look forward to actively engaging with the students, faculty, staff, administrators, and fellow chaplain colleagues on campus. These are challenging times that require us to commit ourselves to public service and mutual support, to cultivate a deeper understanding of who we are and where we are ultimately going, and to being the best of who we are while remembering the divine in each other, thereby taking us one step closer to turning hate into hope.”