Images of Harlem, then and now 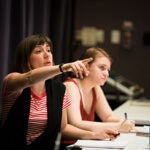 For photographer Dawoud Bey, activism and art have long been linked. Bey, whose portraits of Harlem form the centerpiece of the exhibit “Harlem: Found Ways” now at the Ethelbert Cooper Gallery of African and African American Art, first connected with his chosen visual medium through a protest.

The year was 1969, and Bey, then a 16-year-old living in Queens, had heard of the controversy around the Metropolitan Museum of Art’s “Harlem on My Mind” exhibition. The show, which contained no paintings or sculptures by African-American artists, was drawing protests and picket lines, and the socially conscious teen decided to check it out.

“As it turned out,” Bey explained in a gallery talk, “on the day I got there, there was no demonstration. There was no picket line, so I got to go see the exhibition.”

What he found was as powerful as any protest. Describing a “pivotal and transformative moment,” the artist recalled being in a Manhattan cultural institution, “seeing photographs of ordinary African-Americans in a museum, and seeing people looking at the photographs.”

If that show turned Bey, who is also a musician, into a photographer, it also taught him what he didn’t want to do. Unlike the poorly conceived and patronizing Met show, Bey said last Wednesday, “I knew that I wanted to exhibit those photographs in the community, so people who were the subjects of the work would have access to the work and be part of the audience for those works.”

The resulting show, “Harlem, U.S.A.,” compiled photographs made from 1975 to 1979 and was indeed first exhibited at the Studio Museum in Harlem.

Many of these photographs are included in the Cooper show, which also includes works by Abigail DeVille, Glenn Ligon, Howard Tangye, Nari Ward, Kehinde Wiley, and selections from the Studio Museum’s Harlem Postcard project.

Largely portraits, Bey’s photos from that first exhibition depict an established community. In some, like “A Man in a Bowler Hat,” the subjects face the camera directly. Self-possessed and self-aware, they present a dignified and timeless humanity. Others, like “A Woman and Two Boys Passing,” appear to be candids. Almost abstract, light and shadow are as elemental to the composition as the title characters in this photo, which captures one moment in time.

That moment may soon be gone. Bey has since moved out of New York but retains ties to the area. During visits, he explained during his talk, he became “acutely aware” of how Harlem was changing, as gentrification remade the historically African-American area into something wealthier, whiter, and more generic.

“I wanted — or needed — to make a work about that,” he explained. In 2014, he began walking the streets again, seeking his subjects and focus for a new series of photographs. 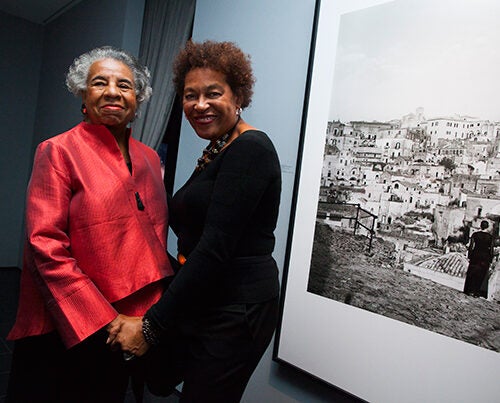 The result, “Harlem Redux,” is a startlingly different body of work. In place of the small, intimate black-and-white portraits of “Harlem, U.S.A.,” the new photos, which have pride of place in the front of the Cooper Gallery, are monumentally large color prints. More striking still, they focus not on the people as much as the landscape of change. Construction sites and materials fill these prints with the yellow and orange of safety barriers, the green of a dumpster, or the mottled browns of water-damaged paper. The result is almost abstract — beautiful, but lacking the human touch of a living, breathing community.

When people are pictured, they are anonymous, as if overwhelmed by the change around them, or seen only from the back, as in “Young Man, West 127th Street.”

The young man is, explained Bey, the one unchanging point in this landscape. “He’s still sitting there like people always have,” said the artist, “even as the place transforms around him.”

“Harlem: Found Ways” will be on view at the Ethelbert Cooper Gallery of African and African American Art, Hutchins Center, 102 Mount Auburn St., Cambridge, until July 15, open Tuesdays through Saturdays, 10 a.m. to 5 p.m. Closed on the Fourth of July.