The fallout from Comey’s firing 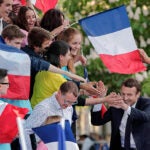 Skeptics of that rationale were quick to note that Comey oversaw the criminal and counterintelligence investigation into alleged ties between Trump associates and Russian officials, as well as Russia’s involvement in hacking the 2016 election. Comey had earned the ire of both political parties for his unusual pronouncements late in the campaign confirming the FBI’s probe into Clinton’s use of private emails for some public business while she was secretary of state.

Alex Whiting is a professor of practice at Harvard Law School who focuses on complex international and domestic prosecutions. From 2010 to 2013, he coordinated the ongoing investigations and prosecutions in the prosecutor’s office at the International Criminal Court in The Hague, Netherlands. Before that, he was senior trial attorney with the International Criminal Tribunal for the former Yugoslavia and was a U.S. prosecutor. Whiting spoke with the Gazette about the legal issues surrounding Comey’s dismissal.

GAZETTE: Critics have questioned the timing of FBI Director James Comey’s dismissal, and yet both Democrats and Republicans complained about his handling of the probe into Hillary Clinton’s emails. And, of course, the president is authorized to hire and fire the FBI chief. How do you see this event?

WHITING: I think that’s correct about the complaints and about the authority of the president. But what’s odd is that if Comey’s handling of the Clinton email investigation was really the motivating factor, Trump could’ve done this months ago. Also, his [previous] statements, as well as the statements of Attorney General Jeff Sessions, have been praiseworthy of Comey with respect to the investigation — at least the announcements of the investigation. So there’s the timing issue about why he waited until now to do this. And that makes people think that there is another reason he did it now, and that it has to do with the ongoing Russia investigation.

GAZETTE: Does he need a specific reason to hire or fire the FBI director?

GAZETTE: If the firing was related to Russia, does that technically prevent him from doing this, no matter the issue of how bad it looks politically?

WHITING: That’s a good question. He has the authority to hire and fire, that’s correct. He has to get Senate confirmation to hire, but he has the authority to fire. If it turned out he fired Comey because of the Russia investigation and he did it in order to impede that investigation, then that could rise to the level of obstruction of justice. But the important thing is that most people aren’t thinking about this in terms of the legal authority to hire and fire Comey, but rather about the norms he has violated and the independence of the FBI director and the credibility of the FBI and its investigation. That’s really where the problem is. There’s a perception — and it’s a pretty widespread perception — that the reasons he gave for the firing are a pretext, and it really was to get rid of Comey because Comey was aggressively investigating the Russia case.

GAZETTE: Given how infrequently FBI directors are let go, Deputy Attorney General Rod Rosenstein’s letter announcing the rationale for Comey’s firing did not appear heavily grounded in the law. What do you make of this, and, legally, how can Attorney General Sessions recuse himself from the Russia case and yet weigh in on firing? Is there a legal definition of recusal in play here?

WHITING: On Rosenstein’s memo, I think what he said was right about the errors that Comey made. They were violations of Department of Justice policy and practice. He didn’t commit crimes or break the law, but [there were] violations of practice that did undermine his stature and his credibility. So the rationale is one a lot of people agree on. It’s the conclusion that’s the problem. Does that lead him to be fired? Most people think not. And should he be fired right now, when he’s leading this investigation? Again, most people say no.

GAZETTE: What does recusal mean in this context?

WHITING: It’s a fine line. Some people have raised that question. Sen. [Patrick] Leahy, for example, has said this violated the recusal. I think that what Jeff Sessions would say — and it’s debatable — is that this had nothing to do with the Russia investigation. That’s what he was recused from. This had to do with Comey’s conduct in the Hillary Clinton email investigation, and that’s why Sessions could act without violating the recusal. He would make that distinction.

GAZETTE: Are the early comparisons to Watergate and the “Saturday Night Massacre” apt or overblown? Is there a legitimate case to be made for an obstruction of justice case?

WHITING: I think it’s hard to know, and it’s too early to tell. I think some of the comparison is apt, and some of it isn’t. We don’t know where this investigation is going to go. It’s certainly not clear — at this point it’s far from clear — that it’s ever going to implicate the president himself. And so perhaps in that way it might be different. However, in terms of protecting the integrity of a law enforcement investigation, there are a lot of similarities. Even if Trump isn’t concerned about the investigation coming to his door, he’s certainly concerned about how it’s affecting his administration. It’s quite clear that Comey was a big headache to his administration, and this gets rid of that headache. In that respect, it feels like the “Saturday Night Massacre.”

GAZETTE: Several Democratic lawmakers have called this a constitutional crisis. Can you explain what that is, and, in your opinion, are we in one? If so, what are the legal or procedural remedies available to right the ship, so to speak?

WHITING: I’m not sure it’s quite at a constitutional crisis. It is shaking the foundations of our legal system and the respect for the law and the respect for the independence of the Justice Department and the FBI. There are going to be two things that likely will be the remedy. The first is that there’s much more likelihood now that there will be some kind of an independent investigation, either by Congress or a special appointed counsel who will direct the Justice Department investigation. Secondly, the person who is appointed to replace Comey will have to be somebody of utmost independence and integrity who has enormous credibility that everybody can agree on.

GAZETTE: What are the benefits and drawbacks of engaging a special counsel to oversee this matter?

WHITING: The benefits are that you’re going to have a more independent investigation. The drawback that the administration is likely to see is that it will have less control over that investigation. Under the procedure as stands now, [a special counsel] wouldn’t be completely out of reach of the attorney general or the president. However, there still will be independence, and it would be extremely difficult and politically impossible for the president or the attorney general to remove the special counsel or to second-guess or to block that person. So technically, the counsel would still be under the authority of the attorney general, but for all practical purposes would have enormous independence. The counsel would not have to report to the attorney general on a daily basis, for example, and would be freer to make his or her own decisions. It’s building in a greater degree of independence from the hierarchy of the Justice Department.

GAZETTE: But wouldn’t that create a delay in the investigation?

WHITING: It would result in some delay because you’d have to appoint a special counsel who would then have to get up to speed. And there’d be less control, so politically the Justice Department, the attorney general, and the president might not like it. And also there’s always some concern that if you appoint independent prosecutors or special counsels they will become runaway trains.

GAZETTE: I think for people who aren’t lawyers, it’s assumed that the law wouldn’t permit a president to act in a way that would affect a federal prosecutor or an FBI director when that person is in the middle of an active criminal and counterintelligence investigation that may involve the president’s campaign associates. What does the law say?

WHITING: No. That’s part of the law. But there is a separate statute, 18 U.S.C. 1503, that prohibits anybody from corruptly impeding a criminal investigation that is ongoing. There’s the possibility, if it could ever be established, that that’s what the Trump administration was doing.

GAZETTE: Is there anything that prevents a president from appointing an ally who then shuts down either an investigation or a prosecution, irrespective of what’s been uncovered?

WHITING: Yes. Whoever he appoints has to be confirmed by the Senate. It’s a majority vote in the Senate, but the Democrats could filibuster on this. This has become a political firestorm, and the Democrats will definitely filibuster if the person is not to their liking.

GAZETTE: CNN reported that there are two, perhaps three federal and/or state grand juries that have now seen evidence of this Russia matter and have issued subpoenas to associates of former national security advisor Michael Flynn for documents. If that’s true, what does that tell us about how far along the investigation may be and where it might go?

I think the thing that is striking here is how much the [Trump] administration misjudged what the reaction would be. By all accounts, officials were surprised by the reaction to the Comey firing, a response that if true would be mind-boggling. And then there is the matter of not appreciating the politics of the case and the seriousness with which Washington and the country take these issues about law and the respect for law. There’s a feeling that the administration thinks that these things can be all traded, and they’re all bargainable, and it’s like there’s nothing sacred. I think their reaction says something about their understanding of government and the seriousness of the jobs they have, and how they’re treating them.