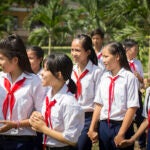 In the most anticipated presidential election since Americans voted last November, centrist candidate Emmanuel Macron defeated Marine Le Pen, a far-right nationalist, in a decisive victory Sunday to become leader of France. The vote ensured renewed stability for the European Union (EU), but raised new questions on what’s next for France and the continent.

A boyish political newcomer who is unaffiliated with France’s traditional political parties, Macron, 39, is a banker and former economics minister. He ran an upbeat campaign movement titled “En Marche!,” vowing to keep France in the EU, continue immigration, and jump-start economic reforms. Because Le Pen had promised to pull France out of the EU, earning backing from both President Trump and Russian President Vladimir Putin, the election was widely seen as a bellwether on the union’s fate.

Arthur Goldhammer is a columnist who writes frequently on France’s politics and other issues. He’s also an award-winning French translator who has interpreted more than 125 books, including Thomas Piketty’s 2013 bestseller “Capitalism in the Twenty-First Century.” Goldhammer is a senior affiliate at the Minda de Gunzberg Center for European Studies at Harvard. He spoke with the Gazette about the election and what it means for France and the EU.

GAZETTE: What’s your reaction to the results?

GOLDHAMMER: I was not surprised that Macron won. The polls had been consistently in his favor by 60 to 40 percent throughout the campaign and hardly varied from that after a face-to-face matchup between him and Le Pen. The final margin was greater than that. He got just over 66 percent in the end, so that was slightly surprising. But even that did not really surprise me much because Le Pen did really badly in the debate between the two voting rounds. There was so much negative commentary on that that I thought he might well do better than the polls had indicated.

GAZETTE: How was a relative unknown like Macron able to come away with a decisive victory while working outside of the traditional party system? What do you think contributed to this outcome?

GOLDHAMMER: I would characterize it as a decisive victory, a landslide really. What contributed to the outcome was disillusionment with both of the mainstream parties. The last two presidencies, [Nicolas] Sarkozy’s and [François] Hollande’s, had both been considered failures. Hollande’s popularity rating last December was 4 percent, which is a historic low and truly an incredible rejection. So I think many people were looking for something different, something new, outside the traditional party framework, and Macron provided that. He was closely associated with Hollande [as his economics minister] and, in particular, with some of the more unpopular reforms that Hollande introduced, including a reform of the labor code. Macron has promised to go even further in reforming the labor code, and yet he did extremely well. So that is somewhat paradoxical. But on the whole, I think his youth, his energy, his fresh face, and lack of affiliation with the major parties were major factors in his victory.

GAZETTE: Did the sharply contrasting tone of the two campaigns have an effect?

GOLDHAMMER: Yes. I think he was upbeat, and he was a strong supporter of the European Union, whereas Le Pen promised to take France out of the European Union, and I think that was an unpopular position on her part. One should not overestimate the vote for Macron. It was not all a positive vote in his favor; in part, it was a rejection of Le Pen and fear of what her election would mean not only for the European Union but also for France’s reputation abroad. And then, I think the Brexit and Trump votes also influenced the outcome. After Trump was elected, a lot of people thought that would favor Le Pen, but I think it had the opposite effect. Because Trump’s statements about the EU and, in particular, about NATO — saying that he thought it was obsolete — really frightened a lot of Europeans, not just in France. So that made them feel the European Union was even more essential because they no longer knew where they stood in relation to the United States.

GAZETTE: What message did voters want to send, and should Americans see this as a repudiation of Trump, Putin, or French nationalism?

GAZETTE: Turnout was at its lowest level in decades, and nearly one-third of voters rejected both Le Pen and Macron. Why was that?

GOLDHAMMER: Turnout was down somewhat. Normally, it is close to 80 percent in presidential elections, and this year it was 75 percent — so a drop of 5 points. In part, that reflects the reluctance of voters of both the far left and the filloniste right, the center-right party, to vote for Macron, whom they considered too centrist. On the far left, the people who voted in the earlier round for [Jean-Luc] Mélenchon regarded Macron as too business-friendly. He’d been a banker, and they didn’t like that. Whereas people who voted for [François] Fillon earlier found Macron too far to the left for their taste. So some of them abstained, and some of them voted for Le Pen.

GAZETTE: What does this mean for Le Pen’s political future? Can she still claim a kind of win in a way, given how far she’s pushed the party into the mainstream, and her expansion of her father’s electoral showing in 2002?

GOLDHAMMER: She certainly has increased the total vote since her father’s days. She’s done that in successive elections, not just in this election, but in regional and departmental elections before this. So she’s not going to disappear from the scene. But I think her failure in this election and her failure even to meet expectations, since she had been expected to get 40 percent and got only 34, brought home, not only to observers but to Le Pen herself, that her strategy of simply trying to soften the image of her party but remain a party without alliances was not going to work. It would never reach the presidency. So she announced yesterday that she’s going to disband the National Front (FN) in its current form and reconstitute it as a party that will actively seek alliances with other parties, which the FN has never done before. She did that in the final round of this election when she made an alliance with one of the lesser candidates, [Nicolas] Dupont-Aignan from the Debout la France party, whom she said she would name prime minister.

She’s going to try to relabel the package, but there may be challenges from inside her party, in particular from her niece, Marion Maréchel-Le Pen, who is leader in the south of France, in the Provence-Alpes-Côte d’Azur region. Marion Maréchel-Le Pen appeals to more traditional, Catholic voters, family-values voters, whereas Marine Le Pen did not. She may challenge Marine Le Pen’s leadership from inside the party, and there may be other challenges. You’ve already begun to hear certain criticisms of Le Pen’s strategy from inside the party. So the party could fracture, but it’s a little early to say.

GAZETTE: What challenges will Macron face early on? What expectations will he need to meet in order to retain confidence?

GOLDHAMMER: His first challenge is the legislative elections, which come up on June 11 and June 18. Since he has no party of his own, just this movement that he’s founded as a presidential vehicle, he’s going to have a hard time putting together a majority. Although there is a wave of enthusiasm after the election, so that one recent poll said he might win as many as 200 seats, it’s a legislature of 577, so that would still be short of a majority. The president gets to name the prime minister, but the prime minister has to be confirmed, and receive a vote of confidence from a majority of the legislature. That will be his first challenge. And then the second challenge will be that if he continues along the lines that Hollande started, with this labor code reform, which he’s announced is going to be his top priority, he may face pretty stiff opposition right from the beginning from some of the trade unions.

GAZETTE: How much time will the public give him to produce results?

GOLDHAMMER: I think he’s going to have a very short period of time. The French like to speak of an état de grâce, which would be the equivalent of our honeymoon period. A number of newspapers have said there will be no état de grâce for Macron, that he’s going to be under the gun from the beginning. The right-wing party, the Republicans, will want their revenge because their candidate was eliminated. The Socialist Party is in complete disarray, but they too will be looking to get what they can out of Macron. They don’t trust him. He did, after all, abandon their party and refused to run in their primary. And then the Mélenchon people are even more distrustful. So there are a lot of people laying for him and waiting for him to make mistakes, and I don’t think there’ll be a long period of time.

GAZETTE: What are likely to be the political and economic effects of his victory for France and the E.U. moving forward?

GOLDHAMMER: The biggest effect is that German leaders have confidence in Macron. Both [German President Angela] Merkel and [Wolfgang] Schäuble, her finance minister, announced their support for him. And on the left, Sigmar Gabriel, who’s now the foreign minister and was the vice chancellor, wrote an op-ed piece in Le Monde before the election supporting Macron. And Martin Schulz, who could be the next chancellor, worked closely with Macron when Macron was economy minister in France. Although he didn’t endorse him, I think you can see that there’s a close relationship. So the biggest economic effect would be that if German leaders trust Macron as much as I think they do, they might be willing to loosen up the strings on austerity and begin to spend a little more — not going into a budget deficit themselves, because that’s prohibited by their constitution, but by recapitalizing the European investment bank, which would be a form of stimulus for the European economy. That’s the biggest hope. Macron can’t really do it on his own because France is constrained by EU budget rules, but if he can persuade Germany to change its policies, then that could have a very positive effect in Europe.

GAZETTE: Presumably, if there’s a stronger political bond between Germany and France, that bodes well for the EU and France?

GOLDHAMMER: Yes. “Bodes well” might be putting it a little too strongly, but “a ray of sunshine,” a positive indication. But we still don’t know how far Germany is going to be willing to go.