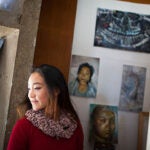 Facing future with hands-on empathy for others

Arts First is just one example of arts experiences that many students at Harvard engage with every day. For two of these students, taking over Harvard’s official Instagram account during the four-day event was the perfect opportunity to showcase what they love most about the arts at Harvard. Lance Oppenheim ’19 and Samuel Fisch ’20 shared photos and videos that highlighted arts-related classes, behind-the-scenes activity of Arts First events, and much more on the Instagram site.

In addition to being a Harvard College student concentrating in Visual and Environmental Studies, Oppenheim is a director, editor, and photographer who makes cinematically informed documentaries. Oppenheim’s films have been screened at more than 60 film festivals and featured by The New York Times, the Smithsonian Institution, The Atlantic, Vimeo (as four Staff Picks), Short of the Week, the White House official blog, and PBS.

In 2014, Oppenheim was selected as a U.S. Presidential Scholar in the Arts and as a Young Arts national finalist. In 2015, he was the recipient of a Southeast Asian travel and film grant, and later that year, he received a fellowship at the Future of Storytelling Conference in New York City.

For Oppenheim, being a documentary filmmaker at Harvard has allowed him the opportunity to work with people around campus who don’t typically create art. Since coming to Harvard, Oppenheim has found that “collaborating with individuals who are interested in filmmaking and photography — but are largely unaware of its processes and hold different interests altogether — [has made for] some of my most rewarding experiences on campus.” Oppenheim has served as a film proctor for the First-Year Arts Program (FAP), a pre-freshman orientation program that encourages exploration in all forms of art and orients artists to the academic and extracurricular arts opportunities at Harvard, during which he co-led two film-related workshops. He has also collaborated with the executive board of Hasty Pudding Theatricals to add a videographer position and has been working with the organization on a variety of multimedia projects to help recontextualize the club to a broader audience. 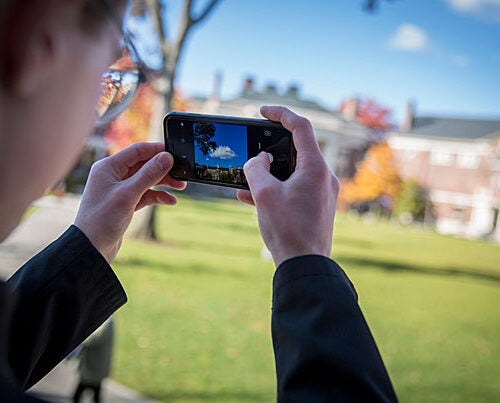 For College student Jasper Johnston ’20, discovering Harvard is a shared experience through Instagram

Fisch is an award-winning, internationally published photographer. Most recently, he was a member of the Digital Team at Hillary for America, photographing Hillary Clinton and her family and campaign surrogates in 100-plus cities across the country on the campaign trail.

Having participated in the First-Year Arts Program (where he met Oppenheim), Fisch’s immersion into the “amazing depth of commitment to, and student passion for, the arts” began as soon as he arrived on campus. The program not only exposed him to numerous upperclassmen who were involved in the arts all across Harvard but also allowed him the opportunity to explore many forms of art, most of which he had never tried.

Fisch works on campus as a photographer for the Admissions and Financial Aid Office and “loves being able to showcase for prospective students the variety of unique yet equally compelling experiences students have at Harvard.”

For many students, Arts First is the culmination of the remarkable cross-pollination that occurs between academics and artists at Harvard. The “takeover” of the Instagram account allowed Oppenheim and Fisch to showcase this firsthand.

As Oppenheim noted, “From composer Sam Wu’s [’17] orchestral installation that measures audiences’ brainwaves to generate music to the Graduate School of Design’s installation of seesaws that emit sound and light, Arts First truly encapsulates Harvard’s interdisciplinary nature as an institution that fosters creativity and collaboration between artistic and academic fields.”