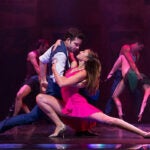 As Harvard’s Theater, Dance & Media (TDM) concentration turns 2 this spring, it graduates its first concentrators, a milestone for a nascent department that its caretakers describe as adventurous and enthusiastic as it finds its footing.

“It’s an exciting, thrilling time to be in a place that has the resources that it has and such an amazing student body. Our students are coming from a lot of different disciplines, and I like that it’s interdisciplinary, and not purely practice-based,” said James Stanley, lecturer on history and literature and on Theater, Dance & Media. “TDM is still finding its feet, trying to figure out what it wants to be by inviting diverse artists into the classroom and in conversation with its students. The more it does that, the more it will find its grounding.”

Martin Puchner, chair of the Committee on Theater, Dance & Media, called the progress “exhilarating.” Ten students have declared TDM as their concentration this year, and 20 more study it as a secondary. There are two TDM seniors in the first graduating class, a number that will quadruple next year alongside a growing cohort of 30 concentrators.

“These are good student numbers, especially since most of our students will want to do a production-based thesis. Our capacities are really well used by 30 concentrators,” said Puchner, the Byron and Anita Wien Professor of Drama and of English and Comparative Literature. “I’m super happy with those numbers. I think the fact that students had been asking for art-making — and making in general — means there is a very healthy number of students who are very involved and contribute a lot.”

Sam Hagen ’18 is already getting more involved. The joint concentrator in Theater, Dance & Media and the History of Art and Architecture was inspired to take two theater courses, “Introduction to Dramaturgy” and “The Art and Craft of Acting,” during his freshman year. Sophomore year, he took five more.

“Once I’m interested, I dive in 100 percent,” said Hagen, who launched Theater Dance Media, a biannual student magazine founded by students in the concentration that showcases campus performing arts. “The thing that’s made me feel so positive is the energy toward developing new student work. Any project we want to be involved in — lectures, or guests we want to bring to campus — the department is listening. They want to make it happen.”

Green-lighting the many production and project requests requires additional infrastructure that Puchner said has created a good kind of growing pain. He is hiring a technical assistant and an artistic producer to serve as the point person to make sure productions are integrated into the pedagogy of the semester.

“Students who participated in the fall production ‘A Dream Play’ committed to 200 hours of rehearsal, which showed the need to integrate that intense learning experience into the curriculum,” he said.

Concentration lecturer Mario Zambrano, who joined the faculty this spring after working for 25 years as a professional dancer, taught the popular “Deconstructing a Novel into a Dance” and “GAGA,” a movement language created by Ohad Naharin and taught this spring. Drawing concentrators as well as students from across the University, including the Harvard Kennedy School and the Graduate School of Design, Zambrano said “GAGA” was a profound new way of approaching the discipline, especially for those who had never had previous dance training.

“The first two weeks, the students had this look of awe. It was like I was introducing them to their very own bodies,” he said. “It’s fascinating, and I’m curious for what the vision and takeaway can be. TDM as an arts concentration is competing with other degrees Harvard has had for years, and we need to build our reputation as something valuable, essential, and necessary.”

The media component of the concentration promotes more direct connections with the performing arts, making it part of the standard repertoire. Among the spring course offerings was a technical theater design course on audio, lighting, and video, and “Movement Lab” with Jill Johnson, senior lecturer on music and director of the Office for the Arts’ Dance Program. Marcus Stern, associate director at the American Repertory Theater, and Alfred Guzzetti, the Osgood Hooker Professor of Visual Arts, co-taught “Directing Film: Telling the Story and Working with Actors.”

Deborah Foster, director of undergraduate studies for Theater, Dance & Media and senior lecturer in the concentration, said the collaborative, interdisciplinary approach among faculty and students “has created an extremely rich conversation on theater, dance, and media in the 21st century and its supreme importance at this time.” She used last fall’s production of “A Dream Play,” directed by Daniel Kramer, artistic director of the English National Opera, as an example.

“Daniel’s powerful adaptation of [August] Strindberg’s play, opening three days after our national election, had a huge impact not only on all of the students involved, but also on those who came to see the production. Daniel also taught a course in the fall called ‘Devising Physical Performance.’ Participants sent me a letter at the course’s conclusion testifying to its enormous influence on their own work,” Foster said.

As the concentration scales up, staff and administrators are facing challenges to finding enough space and time to meet the demands. Said Andrew Gitchel, technical supervisor of the concentration: “Some of the obstacles at the moment are physical in nature. A lot of classroom spaces aren’t set up for the classes that are needed for art-making, and we are constantly looking at other spaces on campus that can be repurposed. The scene shop in the basement [of Farkas Hall] … is constantly in use. There’s a studio on the third floor with a screen, projector, and some lighting, but it’s not a design laboratory where students can do design work or experiment. As the program grows, we will have increased numbers of concentrators with thesis projects. Finding a balance of space for them and the extracurricular groups [such as Harvard-Radcliffe Dramatic Club] is a critical challenge.”

“They’re taking their craft that much more seriously. To see what we’ve done in a year and a half — we’re literally giving birth to a concentration,” he said. “To imagine what this will look like in the very, very near future, we can feel this wave of momentum rising.”

Hagen agreed, adding that the all-encompassing environment of taking classes and working on shows together bonds students like few other concentrations do.

“We are in total capacity, and it catalyzes constant collaboration,” he said. “It creates a little TDM bubble that is so complete in nature that it makes us better communicators and enriches our experiences.”