The lessons on Russian intelligence 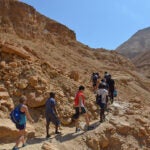 A student trip to the Holy Land

Despite President Trump’s saying that it’s all just “fake news,” James R. Clapper, who was U.S. director of national intelligence from 2010 until January, said he has no doubt that Russia successfully interfered in the 2016 election and “clearly favored” Trump over Hillary Clinton.

“Clearly, the Russians  — and the shots were called at the highest level — were interested first in sowing dissension and doubt and discord in this country,” Clapper said.  As the campaign went on, however, he said their aims switched to helping Trump.

“They, too, didn’t initially take Mr. Trump seriously, but later on they did,” Clapper said Tuesday evening at Harvard Kennedy School, where he discussed the ongoing FBI investigation into Russian interference and whether any members of the Trump campaign had participated in it. Russia’s primary motivation was “intense animus” toward both Hillary Clinton and her husband, former President Bill Clinton, he said.

“In my view, the evidence for this was overwhelming. [It was] extremely compelling just on the basis of cyber evidence alone,” said Clapper, who is scheduled to testify before Congress about the matter on Monday.

Clapper, now a senior fellow at the Belfer Center for Science and International Affairs, pushed back on a claim, “deliberately misquoted or distorted” by some — including Trump — that the intelligence community had determined that Russia did not corrupt the results of the election. The agencies never rendered a judgment on that in their January report.

“All we said in the Intelligence Community Assessment was there was no evidence of messing with voter tallies in any of the 50 states. But we had neither the authority, the expertise, or the resources to assess what effect did it actually have on the election,” he said. It will remain an open question until Congress or some other body looks at it.

Given Russia’s long, well-documented track record of using disinformation to influence elections around the world, “the whole public denial” by Russia and others that it would try to do so was confounding, said Mike Rogers, a Republican congressman from Michigan from 2001 to 2015, once an FBI special agent, and now a senior fellow at the Belfer Center. “Why we should be surprised is shocking to me.”

But the idea that Russia got behind Trump in the belief that he could win is “ridiculous,” Rogers, an authority on cyber security, told a crowd thick with intelligence and national security experts, including Michael Morell, retired deputy director of the CIA, and David Petraeus, the retired four-star general and former CIA head. “They were more concerned in my mind to try to sow chaos, discontent — and they are very good at it.”

Right now, Russia is mounting a similar election-influencing campaign in France and will almost certainly launch one in Germany and across Europe in the coming months. “You’re going to see this all over Europe because they have found something that works.”

Rogers and Clapper said the Russians’ 2016 interference was by all measures a big intelligence win for them.

“This is the most disturbing, most aggressive, and most directly impactful of any engagement they’ve had in our election,” noted Clapper. “They have to regard what they did as a huge success,” which means Russia will likely ratchet up efforts to try again.

Clapper mostly stood by remarks he made in March on NBC’s “Meet the Press” that he had not seen any evidence that Russia and the Trump campaign had colluded. Trump has repeatedly cited Clapper’s comments as proof there was no coordination and that the FBI investigation is a witch hunt. But Clapper was careful to note that he left the intelligence service in mid-January and that his statement alone was not dispositive. “That’s not to say it didn’t happen; I just never saw the evidence of it.”

Rogers dismissed the theory that some coordination might have taken place.

“Given the way that campaign was run, I’d be highly suspect that they had an organized plan to do anything, let alone try to figure out a conspiracy to work with Vladimir Putin to disrupt U.S. elections,” he joked.

Asked by moderator Graham Allison, Douglas Dillon Professor of Government and longtime Belfer Center director, to talk about the working relationship between the intelligence community, which is under the purview of the executive branch, and the congressional intelligence committees, both admitted there could be friction sometimes.

At an early stage of the Iran nuclear negotiations, for instance, during secret bilateral talks in Oman in March 2013, Clapper said Rogers “chastised” the intelligence community for failing to keep him informed of what was happening. Rogers, then the chairman of the House Intelligence Committee, said he was “not amused” to have first learned of the talks from a foreign intelligence agency, rather than from President Barack Obama or Clapper.

“I came away from [it with] a very different perspective about ‘spying on the president,’” said Rogers. “I looked at it as, ‘This is a good course of oversight.’”

Though politics lurks around congressional intelligence matters, even when intentions are straightforward, Rogers said he thought the Intelligence Committee he ran functioned well, and did so in a largely bipartisan way. But he criticized what he sees on the current committee, headed by the Republican chairman, Rep. Devin Nunes, and the ranking Democrat, Rep. Adam Schiff.

“What doesn’t work is unfortunately what you see today, where someone runs to the microphone and says, ‘He’s innocent,’ and the next day, ‘He’s guilty,’ and the next day, ‘Oh, I saw something that makes them really guilty,’ or ‘I saw something that makes them really innocent,’” he said. “That is a complete injustice to a functioning body that has some very, very serious consequences if they get this wrong.”

Asked by former CIA official Morell whether it was appropriate for the House and Senate intelligence committees to be looking into Russian interference while an FBI probe is underway, Rogers said he thought the committees should cede the criminal aspect of the investigation to the FBI and focus more on determining what Russia did, how it did it, and how the United States can defend against such efforts in the future. “I disagree with the way they’re doing it. I wouldn’t do it this way,” he said.

Whether the intelligence community should or should not reveal what was known about Russia’s meddling, and how it was known, was a major topic of internal debate during the final months of the Obama administration, Clapper said.

In deciding whether to release a clarifying Oct. 7 joint statement, Clapper said he and Secretary of Homeland Security Jeh Johnson talked about not wanting to tip the scales, or even appear to tip the scales, in favor of one candidate over another, and worried about how much information should be shared with foreign governments, particularly in Europe, about what had happened.

Clapper said he and Johnson were “pretty adamant about the notion that, knowing what we knew and we didn’t say anything about it, and then the election happened and … for whatever reason and then afterward the public, the Congress, and everybody else learns that we had this information and we sat on it without saying something to the electorate” would create problems, he said, describing the decision to issue a public statement.

Asked whether it’s possible for the FBI to establish whether any political collusion took place, Rogers said he doesn’t think that’s the FBI’s primary focus, largely because it’s harder than other activities to substantiate in a way that meets the high legal threshold. More likely, he said, agents are probably looking at financial interests or other prospective criminal acts.

But either way, he believes the FBI, “like a dog with a bone,” will run down every lead wherever it goes.