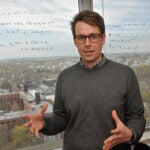 Most people see drones as a hobby, a fun toy for photographers and videographers, or maybe even the future of package delivery.

But Jason Ur sees them as an invaluable research tool.

A professor of anthropology and director of the Center for Geographic Analysis, Ur in recent years has used drones to quickly create 3-D maps of ancient sites in the Kurdistan region of Iraq — something that used to take days or weeks.

“This technology — both the drones and the software to stitch the images together — is now within the reach of anyone with even a small research budget,” Ur said. “That’s what really makes this revolutionary not just for archaeologists, but for any researcher who needs to capture phenomena on the ground. In terms of the potential of drones … the democratization that this technology allows is transformative.”

And to share just how transformative, the Center for Geographic Analysis hosted a conference on “The Drone Revolution in Spatial Analysis.” The two-day event (April 27–28) included hands-on demonstrations and training workshops; the applications of drones in mapping practice; how to select a drone for a particular project, plan a flight path, and process data to create 3-D maps; and the ethical and legal challenges the technology presents.

As the use of drones becomes more widespread across an ever-growing list of research fields, Harvard administrators are working to draft policies that would address their use on campus, and to create a committee of scholars to inform and advise other faculty on best practices for using them in research.

Questions about how drones might be used on Harvard’s campus came up as early as 2012, said Matthew Fox, senior research compliance officer in the Office of the Vice Provost for Research.

At that time, he said, the Federal Aviation Administration (FAA) regulations required those using drones for anything other than recreation to obtain a specific exemption in advance of any flight.

Though those regulations were rewritten last year and provide for a new class of license that requires only a written test, they still separate drone users into just two categories: hobbyists and commercial users. Although some U.S. universities have lobbied the FAA to carve out a research use for the technology, their efforts have not been successful, Fox said.

“We don’t want to impose too many restrictions on what people are allowed to do,” said Fox, who is working to draft the new policy. “But there are regulatory requirements — the FAA says you can’t weigh more than 55 pounds including payload, you can’t go more than 100 miles an hour, you can’t go more than 400 feet up — these are all things want people to be aware of, as well as best practices. That’s why we are working to create a committee with expertise in this area.

“I think this committee is going to be very important,” Ur added.

“I want to be able to teach using this technology,” he said. “In my GIS class, I teach students how to use satellite images to identify archaeological sites; I want to teach them how to made 3-D models using drones as well. We want to help students be creative, but we also need to make sure no one is endangered as well.”

As other scholars discover their utility, Ur predicted the use of drones will expand into any number of fields, but for now he is using it to explore key questions about the demographic impact on a regional scale of the forced deportation by Assyrian kings 3,000 years ago.

“There are probably 3,000 or 4,000 sites in this region, and we’ve recovered less than 250 of them,” he said. “This technology allows us to quickly make high-resolution maps of sites in a way we weren’t able to before.”

But the technology has also aided in the discovery of new sites for investigation, Ur said.

Just this past September, he said, researchers were using a drone to investigate a river valley that had long been known as the entrance to a subterranean water channel built some 2,700 years ago to supply an Assyrian city more than 20 kilometers away.

While reviewing images from the drone, Ur noticed an unusual grouping of stones several hundred meters from the entrance to the channel’s entrance.

“When we looked at it more closely, we realized it was the remains of a dam that was about 20 meters wide,” he said. “It had likely been uncovered by floods during the rainy season the previous year, but we never would have seen it from the ground. My Iraqi colleagues have now begun to excavate it, and are talking about trying to restore it.”

Using drones in the field, however, isn’t without some risks.

While working in Kurdistan, Ur was surprised to find that due to its relatively low cost and ease of use, ISIS fighters in the region often employ the same model drone to survey Iraqi military units.

“We were very aware of this,” Ur said. “So we go out of our way to make sure all the relevant authorities know we’re there and we have permission. We also don’t go near any sort of infrastructure or militarily sensitive areas.”

In the end, Ur said, among the most powerful benefits drones offer is the democratization of science. As the technology becomes cheaper, it can be used by anyone, allowing local researchers to take control of their own history. 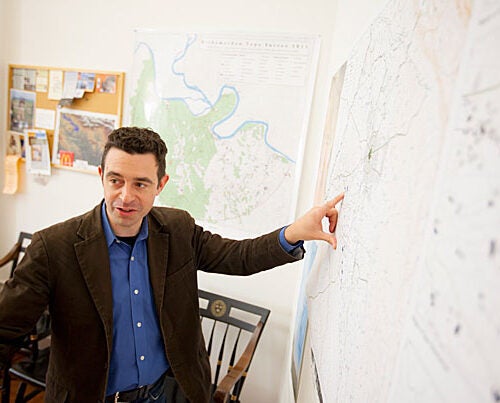 Too often in the past, Ur said, the technology brought by foreign researchers would not stay behind, leaving local scientists unable to devote resources to projects that were important to local people.

“After our last trip to Kurdistan, we left the drones there and local researchers are continuing the work,” Ur said. “They’re flying sites that I care about, but they’re also making their own decisions, and flying sites that are threatened so they can document them.”

For the Kurds in the region, Ur said, that is particularly significant.

“The Kurds have a shortage of history, because in previous times the government in Baghdad was … largely focused on the south of the country,” he said. “Kurds were not encouraged to develop much of their own archaeology, so now they’re very interested in filling in some local history, and they have picked up these tools to start doing their own work and by extension, compose their own history.”