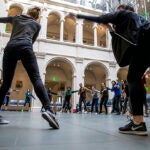 6 writers at risk explain how their work trumps threats

Crafting compelling narratives and gripping stories can be anguish for many writers in the best of times. But for a special group gathered at Harvard’s Lamont Library, getting their thoughts down can be just the start of their problems, and often the cause of them.

Six writers dedicated to pursuing freedom of expression, sometimes under threat of harassment, detention, torture, and even death, spoke last Wednesday at a session co-sponsored by the Mahindra Humanities Center at Harvard’s Andrew W. Mellon Foundation Series on Violence and Non-Violence and Harvard’s Scholars at Risk Program. Yet despite the risks attached to their work, the scholars, authors, and activists from Cuba, Ethiopia, Syria, Cambodia, and Nigeria agreed that writing is their life force.

Beekan Guluma Erena uses his pen to shine a light on the plight of his Oromo people, the largest ethnic majority in Ethiopia, and long sublimated by the federal government. Repeatedly beaten and jailed for speaking out, Erena, who last year was a scholar at risk supported by the Hutchins Center for African & African American Research, refuses to be silent.

“If I don’t write, I become sick,” said Erena, whose work ranges from what he calls “resistance novels” to poetry and studies of Oromo folklore. Writing, he said, is the way “I give air to my situation.”

Journalist Mahmoud Nowara covered the suffering of Palestinians in Syrian refugee camps and the atrocities committed on civilians by Syrian forces during the ongoing civil war. Arrested and tortured by Syrian security forces for his writing and activism, he eventually fled the country, relocating to the United States in January. Being a journalist in Syria is “one of the worst jobs in the world,” Nowara said, but it is also vital work.

“The thing I really focused on,” said Nowara, a Scholars at Risk Fellow in Harvard’s Department of English, “was making my society better.”

British scholar Amanda Hopkinson has devoted much of her work as a literary translator and activist to human rights issues. “I guess I was an activist first and the translation became necessary somewhere along the way,” said Hopkinson, who worked with political prisoners in Latin America for Amnesty International in the 1970s and later edited the human rights magazine Central America Report. She worked as a translator on the 2016 book “The Sorrows of Mexico,” a collection of nonfiction accounts of the country’s rampant violence and the victims left behind.

The point of her work, Hopkinson said, is “to make other people’s voices heard.”

“The blood jet is poetry. There’s no stopping it,” American writer Sylvia Plath once said. Poetry rescued Cuban dissident Jorge Olivera Castillo during his darkest hours. A journalist and author, Olivera was arrested in 2003 for his political views and sentenced to 18 years in prison. He spent 21 months behind bars, he said, for “nothing else but defending the right to free speech,” nine of those in solitary confinement. With wasps and ants his only companions, Olivera said through a translator that poetry helped him “fill this period of terrible loneliness.” He wrote his first volume in jail and credits the work with saving his life.

“I would have died under those conditions otherwise,” said Olivera, a scholar at risk hosted by Harvard’s Department of Comparative Literature. He said he intends eventually to return to Cuba “whatever the consequences.”

Author and educator Kanchana Ugbabe, a Scholar at Risk Fellow in Harvard’s Studies of Women, Gender, and Sexuality Department, discussed being an outsider, a common sentiment among the panelists, many of whom are viewed that way in their homelands because of their outspoken views. 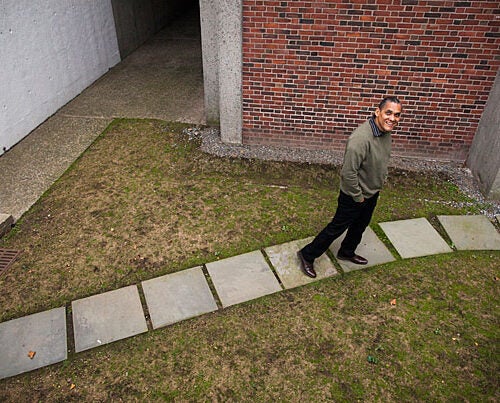 As an Indian woman who has lived in Nigeria for more than three decades, Ugbabe said she has been “walking a tightrope between cultures” for years. That balancing act often requires her to adopt cultural masks to fit in, she said. Ugbabe, who is also a professor of English and African Literature at the University of Jos in Nigeria, often creates a similar perspective for the protagonists of her short stories, allowing them the “freedom to observe from behind the mask without being seen.”

She wears another kind of mask in America, said Ugbabe, who elaborated through a recent piece of writing.

“It is February. I wear trousers and layers of thermal clothing, a long-sleeved blouse, sweater, and gloves. The winter coat and boots are additional baggage I carry around. When I look in the mirror, I see a woman that is not me. No bindi on my forehead, something I have worn since I was a child. No gold bangles or diamond earrings. These were markers that set me apart as an Asian in America with all the stereotypical ethnic features.

“I dispense with my singularity and opt for the bare forehead. I cut my hair short for anonymity. I acquire the monochromatic immigrant look like thousands of people in the United States. My cap completes the masquerade. I dissolve into a speck among the numerous dots that make up the picture of multicultural America. I try not to feel miserable, this is me, re-branded, I say to myself, in greys and browns and black.”

“In a way,” said Ugbabe, “these are the types of attitudes that my protagonists adopt.”

For the speakers, teaching is as important as writing.

Growing up in Ethiopia, Erena realized early the power that knowledge had to fight injustice. In the ninth grade, he said he borrowed chalk and a board from a town building and turned a small tent into a schoolhouse, where he taught close to 80 farmers who had never been inside a classroom. He said that more than half of them went on to university studies.

“To be a teacher means to me to be everything,” said Erena, who is a lecturer at the University of Massachusetts, Boston.

Writer and scholar Sreang Heng, who has authored several academic articles about justice in his native Cambodia, appreciates that he can “say what I want” in a classroom even though he knows there can be dangers associated with such candor. Being a teacher and “shaping young people’s minds” is crucial, said Heng, who is a visiting scholar at Yale University and head of a pilot creative writing program for the Cambodia chapter of PEN International, a global community of writers that promotes freedom of expression.

The key, said Heng, is giving young students “the opportunity to express their thoughts.”

Jane Unrue, who runs Harvard’s Scholars at Risk program, turned to Cat Lucas, Writers at Risk program manager at English PEN in London, for her thoughts during the closing minutes of the two-hour event. The panel, said Lucas, underscored the concept that “attempts to silence people tend to only make their voices louder.”