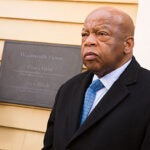 Despite stern warnings from both China and the United States, North Korea tried to launch another test missile this week. Amid ramped-up global tensions over that nation’s rising nuclear capabilities, President Trump has promised a tough response. Vice President Mike Pence, visiting Seoul, and Secretary of State Rex Tillerson said the administration could act more forcefully over the weapons testing. North Korean leader Kim Jong-un responded that he could embark on “all-out war” if provoked.

North Korea’s latest missile launch failed, according to U.S. military officials. The attempt took place just one day after the government, during an elaborate military parade, displayed four missile systems that showed the nation continues to push its weapons program despite economic sanctions and tough talk from the U.S. government.

Nuclear security analyst Gary Samore, A.M. ’78, Ph.D. ’84, is executive director for research at the Belfer Center for Science and International Affairs at Harvard Kennedy School. He shaped U.S. nuclear policy as White House coordinator for arms control and weapons of mass destruction during the first term of the Obama administration and was the U.S. emissary during the 2010 and 2012 nuclear security summits.

Samore spoke with The Gazette about the concern over North Korea’s nuclear test and the challenges the United States faces over the weapons program.

GAZETTE: What do you think happened with the missile test? Was it an accidental internal failure, a deliberate ruse to obscure North Korea’s true capacity, or outside cyber sabotage, as some speculate?

SAMORE: Well, there was a failure. I don’t know why it failed except there’s been quite a high rate of failure over the last year, and my guess is that’s mainly due to a very rushed pace of development. The North Korean missile program is making some progress, but I think that Kim Jong-un is willing to tolerate a very high rate of failure in his effort to try to develop a more credible long-range capability as quickly as possible. He may feel that he’s got a window of time to try to perfect some of these long-range systems, and he doesn’t seem to be deterred by all of the threats that the U.S. and China and other countries have been trying to dissuade him from continuing testing. But obviously, that’s not working.

GAZETTE: What do you make of Kim’s “all-out war” comment? Was that a declaration of some sort, do you think?

SAMORE: I think this is all just noise. Both sides are rattling sabers, but neither side is going to start a war. We recognize that a military attack on North Korea would probably not be effective in terms of destroying North Korea’s nuclear weapons and missile program and would run the risk of a North Korean retaliation against South Korea and Japan, which could cost hundreds of thousands of lives. And the North Koreans know that any attack on U.S. allies in the region would provoke an American response that would destroy them. So I think both sides are posturing, but I think the risk of war is very low.

SAMORE: I don’t think so. The Trump administration is trying to intimidate North Korea not to continue testing, and that intimidation includes both a military element . . . and the threat of additional sanctions. The Chinese are certainly playing along with the sanctions threat. The Chinese have communicated to North Korea publicly and privately that if they continue testing and, in particular, if they conduct a nuclear test, then China is going to join the United States in imposing additional U.N Security Council sanctions.

GAZETTE: What difference can China make here and, given its track record, do you think it’s likely they’ll actually do something this time? What leverage, if any, does Trump have to get China to follow through?

SAMORE: The good news for Trump is that China is genuinely upset about Kim Jong-un continuing to carry out this testing activity. In the last two U.N. Security Council resolutions, the Chinese have, for the first time, begun to sanction North Korea’s general economy — in this case, exports of coal and other minerals. If you look at some of the media in China, which is I think intended to be a warning to North Korea, the Chinese have floated the idea that they would begin to curtail oil exports to North Korea, which would be very damaging to the North Korean economy. So I think the Chinese are serious about imposing additional economic sanctions.

On the other hand, the Chinese have always been unwilling to impose the kind of economic sanctions that could lead to economic collapse and instability in North Korea, and I think that continues to be the case. If the North Koreans do conduct a nuclear test or a successful test of a long-range missile system, I think you’ll see another U.N. Security Council resolution, which will take another step toward broader economic sanctions against North Korea, but still be short of the kind of sanctions that would be fatal to its economy.

GAZETTE: How far along does North Korea’s nuclear program appear to be now? What is the next significant technological benchmark for them to reach?

SAMORE: We know that they’re capable of producing nuclear weapons because they’ve tested five times. And we know they have a lot of experience testing short- and medium-range missiles, missiles that could strike targets in South Korea and Japan. What North Korea has never demonstrated is the ability to carry out a long-range missile test and successfully deliver a payload, and that’s the big weakness or the big gap in their system. They have a lot of long-range missiles on paper, and they’ve paraded mock-ups through the streets, but they’ve never actually successfully tested a long-range system … so until they do that, they don’t have a credible ability to target the United States with missiles. How far out are they? I have no way of judging. I don’t think we’ll know until they do it. 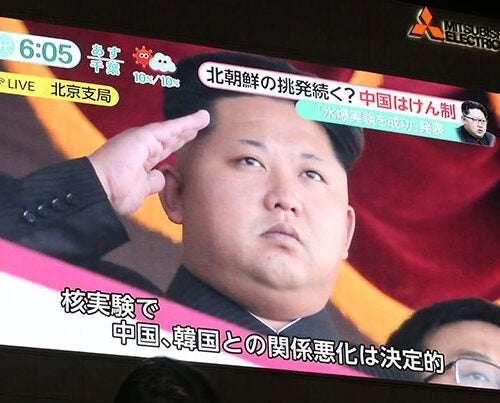 GAZETTE: Politically speaking, hasn’t the mere ability to hit either South Korea or Japan been sufficient leverage for them?

SAMORE: I think so. But I think they would feel even more comfortable if they could attack the United States directly. That’s their goal, and I think they’re trying to reach that goal. And sooner or later, they will, unless we are able to stop or delay their testing program. They will eventually achieve that capability. But you’re right. Their ability to attack South Korea and Japan has been sufficient for deterrence for decades. Even before they had nuclear weapons, the ability to target Seoul with conventional weapons — artillery and rockets and so forth — has been sufficient to deter the United States and our allies from attacking them. I have no doubt that Kim Jong-un would like to demonstrate in a credible way that he could attack the United States, but I have no way of judging how far away they are from achieving that.

GAZETTE: You characterized the recent tough talk from the Trump administration and Kim Jong-un as saber rattling. Do you see evidence of a strategy underpinning U.S. talk and, if not, what should we be doing?

SAMORE: It’s a good question. We obviously don’t have any solution to this problem. That’s why the North Koreans have been proceeding to develop their nuclear and missile programs since we first discovered them in 1984. So this is a problem that goes back to President Reagan, and we have failed, over the past five presidents, to find a way to resolve the problem, although I think we’ve been able to slow it down at different times through a combination of diplomacy and military intimidation and sanctions and so forth. So there’s no new secret out there; there’s no policy tool that hasn’t been tried already.

I think the Trump administration is right to try to build up leverage through economic sanctions, and then, at some point, I hope they will pivot to an effort to try to negotiate constraints and limits on North Korea’s nuclear and missile program in exchange for sanctions relief, because we’ve begun to build up some pretty good bargaining leverage now, with Chinese help. So they’re doing the first part, which is the pressure part. Whether they ever get around to the second part, which is trying to negotiate …

SAMORE: I think it’s unclear. I think they have to wait and see, first of all, what the new South Korean government is like. The South Koreans have an election on May 9, and both of the candidates frankly are likely to have a less hard-line position than the current government, that of former President Park Geun-hye. So we’ll have to coordinate, as we always do, with the Koreans on a way forward. Then obviously President Trump and Chinese President Xi Jinping have started to have a conversation about this issue, as well. I don’t think it’s possible, at this point, to predict whether the Trump administration will pivot to a negotiation strategy once they feel they have substantial bargaining leverage.

President Trump has exhibited tremendous flexibility in his foreign policy positions, having reversed just about everything he said he would do from the campaign. I just think it’s premature to judge. But in any event, the likelihood of diplomacy succeeding in anything more than delay, I think, is extremely low. So separately from whatever diplomacy we pursue, we’re also going to need to continue to develop and expand missile defense as a way to protect ourselves because sooner or later, the North Koreans will demonstrate that they have the ability to attack the United States directly.

GAZETTE: Is there any reason to believe that if Kim Jong-un were removed, that there might be a possibility of détente?

SAMORE: It’s a very good question. It depends on the scenario. If it’s simply a military coup, so Kim Jong-un is replaced by a junta of generals, then it’s not likely to fundamentally change North Korea’s policy, although they might be more willing to accept limits on the program. If there’s a complete collapse of the North Korean system — again, not likely, but if it happened — and there was unification under South Korean auspices, then I think you could solve the problem. I think whatever nuclear weapons they had would then be removed in that scenario.