A student trip to the Holy Land 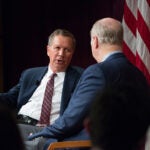 Kasich: Be open to ideas

A visit by 50 shows everyday life, and many complications

“Four Israelis and 52 Harvard students set out to travel in the Holy Land for 10 days. This could be the beginning of a joke. This is also the premise of our adventure.” So reads the description of a previous iteration of the blog for the Harvard College Israel Trek.

A few Harvard students from Israel have led 50 or so of their non-Israeli peers every spring break for the past few years on a journey to their home country to learn about its complicated politics, history, and culture.

I write this a few weeks after participating on the trek, and I am only just descending from the high that accompanied me throughout our travels. While this abnormal state of mind has been less than beneficial for my productivity, I would not trade my week in Israel for anything.

Like the spring break of a typical college student, our trek was, in part, a vacation. As any good traveler must, we spent a fair amount of time visiting the major sites: the Western Wall, the Via Dolorosa, and the Yad Vashem in Jerusalem; the Dead Sea; the city of Akko; the beach and the old city of Jaffa in Tel Aviv. We also had our fair share of indulgences: dinners at fine restaurants, camel rides in the desert, a tour of a winery followed by a private tasting, and a night at one of Tel Aviv’s hottest clubs.

But what strikes me most as I reflect on my week in Israel is the array of experiences that would have been impossible, or at least improbable, if I had simply travelled to the country on a regular vacation. For example, on our first morning in the country, we had the opportunity to speak with a senior negotiator in the Israeli Ministry for Foreign Affairs. And he was simply the first on a long list of distinguished individuals we met, among them members of the Knesset, a former Supreme Court justice, a prominent investigative journalist, and the spokesman for Prime Minister Benjamin Netanyahu. We visited an Israeli settlement in West Bank, a kibbutz where one of our trek leaders had grown up, a Haredi yeshiva, and an elementary school for immigrant and refugee children.

The episode that stands out most in my mind, however, is our visit to the headquarters of Fatah, a branch of the Palestinian Liberation Organization, in the West Bank city of Ramallah. Emotions were high as we drove there from Jerusalem. In part, this was an understandable reaction to the stunning change in what we were seeing from our bus windows. The drive took us past the rough streets of Palestinian East Jerusalem, Israeli settlements with foreboding walls, and a number of security checkpoints with armed guards.

Once we cleared the final checkpoint and entered Ramallah proper, we were escorted by a private security patrol vehicle and met with the sight of neighborhoods that appeared much less prosperous than those we had seen earlier in our trip. Our trip leaders were explaining to us what we might come across once we arrived; they noted in particular how unique an opportunity this was for them as Israelis, given that their citizenship would normally prevent them from visiting Ramallah.

Upon reaching the headquarters of Fatah, I was both thrilled and confused. The building appeared to be an ordinary apartment complex. We ascended a few floors of nondescript offices and entered a conference room. There, under the watchful eye of a few guards, we heard from a number of high-ranking officials who discussed with us their views on the conflict, the state of affairs in Palestinian communities, and the prospects for peace going forward. Our hosts were warm, engaging, and respectful of our inquiries.

The opportunity to hear these critical perspectives, to witness the differences between Israel and the occupied Palestinian territories, to be jarred from my comfort zone — all these made this experience the one for which I am perhaps most grateful.

What I think our visit to Fatah demonstrates, especially when considered in the context of the trip as a whole, is the extent to which our trek leaders were invested in allowing us to form our own opinions about what is a very polarizing place. Rather than presenting a single narrative that they hoped to convey, our organizers truly strove to provide the broadest range of perspectives that they could.

Weeks after my return to Harvard, I cannot say that my thoughts, opinions, and feelings about Israel and its occupied territories are any more conclusive than the ones I had going into the trek. I suspect Israel will always, to some degree, perplex me. Yet through my experiences there, I feel much more confident in my ability to ask questions about the land and its conflicts and, hopefully, begin to help find answers. The trek was a learning experience like no other; I could have asked for little more from my spring break.