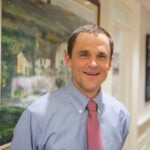 Want to be happy? Be curious

Few political figures can say truthfully that they dedicated their lives to battling injustice and making sure all Americans are treated equally and with dignity. But U.S. Rep. John Lewis is one.

Lewis, one of the “big six” leaders of the Civil Rights era, was still a student in Nashville when he embarked on the Freedom Rides to battle desegregation in 1961. He became chairman of the Student Nonviolent Coordinating Committee (SNCC) and led the group’s efforts to desegregate lunch counters in the South. He also was one of the organizers and speakers at the landmark March on Washington that year.

In 1965, he co-led the march across the Edmund Pettis Bridge in Selma, Ala., where he and other participants were attacked by police in a Civil Rights watershed known as “Bloody Sunday.” Lewis sustained a fractured skull. In 1986, he was elected to represent Georgia’s 5th Congressional District in Washington, D.C., a position the Democrat has held since.

(At the time of this interview in 2017, the Center for Public Leadership at Harvard Kennedy School was about to honor Lewis with the Gleitsman Citizen Activist Award for his 60-year career of advancing human rights. He would go on to be Harvard’s Commencement speaker in 2018.)

Lewis spoke with the Gazette about where he thinks the country is, what more is needed to ensure liberty for all, and how he views the future.

GAZETTE: The country feels more divided today than in some time. Where is America right now, and where are we going?

LEWIS: I think we are at a turning point. I have been involved for 60 years, really. I have seen and witnessed unbelievable changes. I tell young people, especially young children, when someone says to me “nothing has changed,” I feel like saying “come and walk in my shoes. I will show you change.”

I think we’re in one of the most difficult periods in our recent history as a nation and as a people. There is this sense that that’s all we’re going to do, and there’s not anything else or a role for the national government to play in helping to make real the hopes and dreams and aspirations of people. But to fulfill the dreams of so many — blacks, whites, Asian-Americans, Native Americans, Latinos — we must not let those dreams and the hopes of so many be abandoned or die. In spite of all of the progress that was made — and we’ve made progress, we’ve come a distance — we still have a distance to go.

There are people who want to circumvent the lesson, the effect of these two major pieces of legislation. I think there’s still a need for people in high places, not just in government, but in the private sector, in the academic community, in the media, in business to continue to be advocates, bringing people together, and build what Martin Luther King Jr. called “the beloved community.”

GAZETTE: At Attorney General Jeff Sessions’ confirmation hearing, you said, “There are forces that want to take us back. We don’t want to go back.” Is it dispiriting that so many of the issues you fought for 50 years ago appear to be targeted for unraveling by some?

LEWIS: Yes, you look at the appointment of the people to this administration. So many of these individuals are just out of step and out of tune with going forward, with opening up the political process or opening up America and letting people come in. In my estimation, there’s a mean spirit moving around and through our country, and we cannot let that happen without standing up, speaking up, speaking out, and resisting.

GAZETTE: What would it take to get this country to the place the Constitution envisioned, a place where all people are truly created and treated as equal?

LEWIS: I think we’ve got to continue to teach and preach. We’ve got to continue to inspire people to say, “We can do it.” The election of President Barack Obama gave people so much hope. And we cannot let that sense of hope die, and we cannot let it be beaten down, or let it wither on this unbelievable American vine. I tell young children — and adults — that we must not get lost in a sea of despair. We have to be hopeful and be optimistic. Be bold, be brave, be courageous, and just get up and push and pull.

GAZETTE: Where do you see hope today?

LEWIS: I see it among our young people, among our children. They are so smart. The young kids, they’re just very, very smart. And they will be the leaders of the 21st century. They will take us there. So I’m not afraid. It may take a little longer for us to get there because of the recent setbacks. When I move and travel around America, I hear so many people, especially middle-aged and older people, saying, “Congressman, I feel so down; I feel so lost. Do you have a word?” Some people say, “I need a hug.” I say, “I need a hug too.” I have colleagues come to me and say, “What is the word for the day?” And I will say, “Be hopeful, be brave, love, peace.”

GAZETTE: You fought the system from the outside and then the inside. Has it been worth it, and where do you feel you’ve been most effective?

LEWIS: During the late ’50s and especially during the decade of the ’60s was one of my most effective periods because, growing up, I saw and tasted the bitter fruits of racism. I felt the blows of hate. It was easy, it was simple, to help organize a sit-in at a lunch counter in a restaurant or to lead a march or to get out and conduct voter registration drives. It’s unfortunate, but even still today, we have to use some of those tactics and techniques to dramatize the issue, to make it plain, to make it real so people can see it and feel it.

When I was a student in Nashville, Tennessee, during the ’60s and we were planning the sit-ins or going on the Freedom Rides, some of my colleagues said “John, what should we do?” We need to find a way to dramatize it, to make it real, make it plain. And when I moved to Atlanta in 1963 at the age of 23, and I became a member of Dr. King’s father’s church — we called him “Daddy King” — and young Martin Luther King Jr. would be preaching and Daddy King would say, “Son, make it plain; make it real.” I really believe that the Women’s March the day after the inauguration sent a powerful message around America and around the world. People understand now, and perhaps more than ever before, the power of voting with their feet, not just casting a ballot on Election Day.

GAZETTE: When you look back, do you feel like you achieved what you set out to accomplish? If not, what else is left to do, and how can that happen?

LEWIS: What I think is important is that we have not yet created the “beloved community.” We’re not there; we still have a distance to go. The signs that I saw growing up, the signs that I saw in Nashville, in Atlanta, and all across the South during the ’50s and ’60s that said “white men/colored men, white women/colored women, white boys/colored boys,” those signs are gone. And the only place those signs today would appear and we would see them would be in a book, in a museum, or in a video.

But we have these invisible signs that discriminate or put people down. I think it’s a shame and a disgrace today that in America we have hundreds and thousands and millions of people, and especially young children, living in fear. They’re afraid to go to school, they’re afraid to leave their homes, they’re afraid that their mothers or their fathers or their grandparents will be taken from them and they will be sent to some prison or jail or put on a bus, a plane, and be taken back to some other part of the world. When Pope Francis came and spoke to a joint session of Congress, he said we’re all immigrants; we all come from some other place. We need to deal with the whole question of immigration reform and set people on a path to citizenship.

GAZETTE: What do you say to young people who want to work for change but aren’t sure what they can do or where they can be most effective?

LEWIS: I say to young people all the time, whether in high school or college or young people out in the work force or working on Capitol Hill, I say when you see something that’s not right, not fair, not just, you cannot afford to be silent. You have to do something. Wherever you find yourself, speak up, speak out, and find a way to get in the way, to get in what I call “good trouble, necessary trouble.”

When I was growing up, and asked my mother and my father, my grandparents, and my great-grandparents about the signs and about segregation, they would always say, “Don’t get in trouble; don’t get in the way.” But I met Rosa Parks when I was 17, and the next year, at the age of 18, I met Dr. King. And those two individuals inspired me to get into what I call “good trouble.” And I’ve been getting into trouble ever since.