Reporting live from the front lines of history 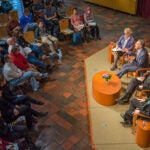 Nixon’s pardon. Iran–Contra. The fall of the Soviet Union. The Boston Marathon bombing.

Most reporters would be glad to have covered even one of these stories. In 40 years as an ABC News reporter and White House correspondent, Ann Compton covered them all, and on March 29 she shared the experience with a record audience at Harvard Extension School’s annual Lowell Lecture.

Compton opened with a parody of recent headlines that had President Trump confusing tax reform and the NCAA Final Four brackets, and appointing TV’s Judge Judy Scheindlin to the Supreme Court. “Now that,” Compton said, “is fake news.”

Compton discussed how journalism has changed over her career. She said the digital age has redefined the field, which is now splintered with hundreds, if not thousands, of news sources of varying degrees of credibility. She said the changes have made reporting “shallower, shorter, and more shrill,” while public trust in the media has eroded. “We have even been called an ‘enemy of the American people,’” she said. “Isn’t it supposed to be just the opposite of that?”

Compton believes journalists are seen as most credible when they’re reporting on an unexpected event — a crisis or natural disaster. She recalled spending Christmas of 1991 on the White House Lawn as Mikhail Gorbachev announced the disbanding of the Soviet Union.

“It was a moment that changed the map of the world,” she said. “I think in moments like that, [for] American mainstream reporters … our credibility is very high.”

Trust diminishes when the news centers on hot-button issues and even reputable journalists can be influenced by their own strongly held opinions, Compton said. She cited a 1992 trip to Florida with President George H.W. Bush, who was then running for re-election. The New York Times reported that Bush’s amazement at the sight of a supermarket scanner suggested that he was “out of touch” with the American people, while Compton, who was also there, reported that the scanner had advanced technology that could weigh groceries and read torn barcodes.

“Even I thought that was pretty cool,” Compton said. “Fake news is different from inaccurate news, and there is no excuse for either one.”

Compton pointed out that in the past, fake news was often funny, such as the 1990s tabloid headline that claimed that Hillary Clinton had adopted an alien baby. Today, she said it is “something much more nefarious. It is made up out of thin air, designed to attract the clicks of people who want to believe that [story].”

Compton offered two milestones for consideration. The first was the landslide election of 1980, when Ronald Reagan won 44 states. That year, CNN and USA Today were founded, and conservative talk radio began to gain influence. The second was the cliffhanger election if 2000, when Fox News and CNBC were less than a decade old and, “[We had] a nation so divided that even the Senate for a while was 50/50, and the Republican vice president had to break the tie.”

What changed in those 20 years? Compton pointed to the growth of cable news.

“People began to find their political comfort zone, getting news from a source that matched more their view of the world,” she said. “In the media climate now, where fact and opinion are hopelessly intertwined, people gravitate to where they feel comfortable. And there’s no question in my mind that this has deepened the partisan chasm in our country and has added to the dysfunction in Congress.”

Compton said she has seen many new presidents arrive in Washington with at least one house of Congress in the same party. All of the two-term presidents she covered left office with both houses in the hands of the other party.

Regardless, she said that presidents are rarely remembered for their legislative accomplishments. “They are judged and measured by history for what they do when unimaginable, often foreign, crises roll into their path,” she said. “And they’re also held accountable because they send Americans into harm’s way.”

The most singular day of her career, Compton said, was Sept. 11, 2001. That morning, in a second-grade classroom in Sarasota, Fla., she watched as Chief of Staff Andy Card entered the room to whisper to President George W. Bush. Such interruptions were unusual. In her reporter’s notebook, she wrote, “9:07 a.m. Andy whispers.”

For the next 10 hours, Compton traveled on Air Force One with the president as the United States came under attack. She reported continuously from her clamshell flip phone, serving as the voice that could confirm the president’s safety.

At one point, during a refueling stop in Louisiana, Compton worried that the media would be left behind to keep the president’s location secure.

“I said to Andy Card and to Ari Fleischer, ‘You can’t kick the press off the plane. If you want the world — much less the United States — to have confidence in the fact that the American president is safe and that he’s in charge and that this government hasn’t been brought to its knees, you need a free and independent press with you.’” She was the only broadcast correspondent allowed to remain on board.

“Every day that I walked up that driveway to the White House for another more than a dozen years, I’d look up at the White House and the West Wing and think about how important it is to have a professional, responsible, free press,” she said. “Because we’re there not for us … we are there because we represent the American people who have put their trust in the hands of leaders who must answer to the American people.”