The loaded history of self-defense 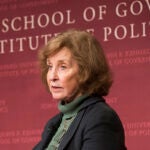 If it’s going to rain, Mr. President, just say so

After the killing of 17-year-old Trayvon Martin in 2012, Harvard historian Caroline Light felt compelled to explore the roots of the American right to self-defense, which has helped turned the United States into a country with more guns than people.

In her new book, “Stand Your Ground: A History of America’s Love Affair with Lethal Self-Defense,” Light traces the development of the notion of self-defense from English common law to contemporary stand-your-ground laws.

The Gazette sat down with Light to talk about her book, the rise of armed citizenship, and the idea that the right to self-defense has traditionally been wielded by the most privileged against the most vulnerable.

GAZETTE: In your book, you trace the history of the American right to self-defense to before the foundation of the United States. Where does this notion come from?

LIGHT: I traced the legal theory and ideology of lethal self-defense back to English common law principles, which are foundational to what would eventually become the United States legal system. But self-defense had serious limitations in the English context. People in the United States forget that originally English common law doctrine held a “duty to retreat” that meant that you were obligated to retreat in the face of an attack. The one exception was enunciated in a 1604 court case involving an intrusion of agents of the king into a man’s private dwelling. These are the origins of the Castle Doctrine, which says that you do not have the duty to retreat when you’re in your home because “a man’s home is his castle.” This doctrine originated as an exemption to the duty to retreat, but in the United States it turned into a very expansive set of notions about who is allowed to fight back lethally against whom. The ideology of lethal self-defense is very selective in the U.S., even if we claim to be gender-blind and race-blind. When people in the U.S. said, “A man’s home is his castle,” what they actually meant was, “A white, property-owning man’s home is his castle,” and he’s allowed to fight back.

GAZETTE: How did the notion of self-defense that emerged in the 17th century as a privilege for white men who owned property, as you argue, evolve over the centuries?

LIGHT: When we look back into the roots of self-defense laws in the United States, we also see that they’re tethered to colonialism, legalized slavery, and the legal doctrine of coverture, which meant that married women couldn’t own any property because their rights were literally “covered” by their husbands. All of these different principles of exclusion were embedded in what would become the United States’ legal system. And as I traced them through time, even as laws started becoming more inclusive, self-defense laws were adjudicated chiefly to protect white men and their property. That took off in the post-Reconstruction era, late in the 19th century, when we see court cases in several states where white men are allowed to fight back lethally even when they aren’t in their home. We don’t see anything like that happening for African-Americans because in the wake of the Civil War, black codes and vagrancy laws, etc., restricted black freedom and access to full citizenship. And most black codes prohibited African-Americans from possessing weapons for self-defense. Similarly, women couldn’t defend themselves against violence from their husbands. I argue that lethal self-defense has been legalized for the most privileged even if, rhetorically, we celebrate self-defense as something universal to all citizens.

GAZETTE: What is the turning point at which the “duty to retreat” from threat becomes what you call a “selective right to kill”?

LIGHT: The pivotal moment coincides with the end of Reconstruction in the 1870s. There are two crucial court cases, one in Ohio and one in Indiana, in which the state courts decide not to obligate white men to retreat in the face of danger even if they’re outside their homes. This coincided with the moment the federal government withdrew federal forces from the South, which meant it withdrew protections for newly freed people. This was done in the interest of protecting white property, especially given the end of slavery. This legal shift accompanied an effort by whites to retain a claim to what had been their property, to maintain control over formerly enslaved people. The 13th Amendment carried a loophole by which white Southerners could continue enslaving African-Americans under the guise of incarceration for criminal behavior. For instance, vagrancy laws could be used to keep African-Americans in prison. All of these things are part of a larger constellation in which self-defense laws were mobilized selectively in the interest of white property.

GAZETTE: How would you describe the legacy of this belief system in today’s American society?

LIGHT: Lethal self-defense, in many ways, has become naturalized as a universal civil right. What that means is that many Americans see it as their right to carry a lethal weapon in the interest of self-defense. I tracked the transition from the late 20th-century focus on hunting to what we see today, which is an urgent accumulation of firearms for self-defense. On top of that, stand-your-ground laws have spread to over half the states, declaring that you can “stand your ground” against an attack wherever you may be, even outside your home. But as we’ve seen with cases like Trayvon Martin’s, these laws are not adjudicated in a way that entitles everybody to protect themselves from what they perceive to be a reasonable threat.

GAZETTE: You said that the killing of Trayvon Martin inspired you to write this book. How so?

LIGHT: That moment was crucial for many Americans. Trayvon’s death and his killer’s ability to walk free were an awakening to the prevalence of racial violence in our supposedly color-blind society. And even though many people would say that the Trayvon Martin case had nothing to do with stand-your-ground laws, it still resonates in terms of how the jury was instructed to consider George Zimmerman’s guilt or innocence. Stand-your-ground laws provide an exemption from criminal prosecution for people who use lethal self-defense in response to a reasonable threat, and that’s what the jury acted on. They believed that it was reasonable for Zimmerman to fear for his life when he saw an unarmed black teenager. I think that speaks volumes to the pernicious injustice of stand-your-ground laws.

GAZETTE: In your book, you call stand-your-ground laws part of the “Do-It-Yourself Security Citizenship” movement. Could you tell us what this means?

LIGHT: “Do-It-Yourself Security Citizenship” is the idea that an individual can and will be heroically prepared to fight in defense of himself and other innocent lives around him. It’s a seductive narrative for many people. And gun ownership, this notion that you must be prepared to kill or be killed, is at the center of “Do-It-Yourself Security Citizenship.” Whether you have a gun or not, the core idea is that no one is going to protect you, the government won’t protect you, and law enforcement won’t protect you. So as a good citizen, you need to take your safety and security into your own hands. The National Rifle Association [NRA] plays a powerful role in distributing and naturalizing this knowledge, making it seem like an emblem of patriotism to accumulate and carry weapons. Gun ownership is no longer about hunting or recreation; it’s about an urgent necessity to protect yourself from danger and to participate in armed citizenship, which the NRA characterizes as the ideal of American patriotism. Their message is that when you protect yourself, you make everybody safer. I’m not saying that it’s wrong to protect yourself, but I’m asking people to be more self-critical about the way in which “Do-It-Yourself Security Citizenship” is based on anxiety and fear about criminal strangers, including the perception of black masculinity as a threat in and of itself.

GAZETTE: Would you say that the notion of the right to self-defense is part of the DNA of the country? If so, how do you think it will evolve?

LIGHT: Yes, in a way, it’s in our DNA, but we have our own particular genetic mutations. As the duty to retreat and the Castle Doctrine were transported to what would become the United States, they changed due to the influence of our specific economy, our ideal of Manifest Destiny, the legacy of slavery, and also our willful amnesia around the ways in which the violence of slavery has not been left in the past at all. It is in many ways built into our DNA, but does that mean we can’t change it? I remain hopeful that we may become more critical about armed citizenship and its impact on public safety. It’s going to take all of us to rethink and question DIY Security Citizenship as the emblem of patriotism.