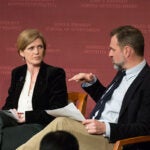 How China and the U.S. might collide — or not

After Donald Trump won election as president in November, many pundits, pollsters, and political scientists pinned his surprise victory on the Democratic Party’s failure to anticipate the “red state rage” that drove rural white, working-class voters to the polls on his behalf in record numbers.

In an era with greater technological connectivity and access to information than ever, how could such a seismic political uprising go virtually unrecognized by half the country?

Sociologist Arlie Hochschild, a professor emerita at the University of California, Berkeley, who studies the intersection of politics, culture, and emotion, has long focused on such rural voters. To get out of her “coastal elite” cocoon and scale what she calls the “empathy wall” between liberals and conservatives, Hochschild spent five years living on and off in southwestern Louisiana, interviewing dozens of grassroots conservatives to understand better how they see, think, and feel about the world.

With political division as the starting point, Hochschild sought to get beyond party loyalties and learn about the emotional narrative that undergirds political attitudes on the right. She detailed her findings in a much-lauded 2016 book, “Strangers in Their Own Land: Anger and Mourning on the American Right.”

Throughout her interviews, government was seen as the enemy or as a failed entity that never helped those who truly deserved it. It was a theme repeated so frequently that “I came to think I was listening to a deep story,” Hochschild said during a talk Thursday evening with Archon Fung, the academic dean and Ford Foundation Professor of Democracy and Citizenship at Harvard Kennedy School. “It’s a story that feels true, so you take the facts out of it, you take moral judgments out of the deep story, and what you’re left with is what feels true.”

In that deep story, as Hochschild describes it, hard-working white people wait patiently in line with their eyes looking ahead at the American dream, which looms just over a distant hill. But the line hasn’t moved in a long time — deserving people haven’t gotten a raise for years, life continues to be a struggle that hasn’t improved, and the dream remains out of reach.

Suddenly, “line cutters” jump the queue: African-Americans, women, immigrants, and undocumented workers who have been granted access to jobs and protections that used to be reserved for white men. “Then enters [President] Obama, who should be impartially supervising the whole line, and he’s waving to the line cutters. ‘He is their president, he’s favoring them, he’s getting them to the [front], but pushing us back. He can’t see us,’” she said in explaining their view.

“And then finally, someone else standing in the line, more educated, maybe from Harvard, turns and says, ‘You are a racist, homophobic, sexist, ignorant Bible-thumping redneck,’” and they see their region criticized as backward, and mainstream culture ridiculing their customs and beliefs. Even their religion has left them feeling marginalized in America’s growing secularism. “They felt like strangers in their own land — not seen,” Hochschild said.

So when Trump’s giant, shiny jet appeared in the sky over these communities, people were excited. “The dried kindling had now seen the match, because this man was saying ‘Now, I see you.’ From the Democrats they saw no sign of recognition of who they were, of their struggle. And they thought Donald Trump did,” Hochschild said. “It was almost like a secular rapture: ‘He will take us up with him to his golden tower.’”

Though many railed against federal corruption and handouts, few of these Louisianans saw a correlation (or what Hochschild calls “the red state paradox”) between living in a state that consistently ranks at the bottom in most national economic, health, education, and life-expectancy metrics, while ranking highest in environmental pollution levels, and relying on federal funds to meet 41-plus percent of its annual budget.

Residents told Hochschild of able-bodied relatives and neighbors who stopped working every hunting season and collected unemployment benefits or who complained about overregulation while griping about unsafe work conditions and toxic waste dumped into area streams and fishing holes by local petrochemical companies, which likely contributes to high rates of cancer.

“The people who I came to know were very stoic; they were used to and almost attached honor to their capacity to withstand bad news,” she said.

Asked what can be done about the situation, Hochschild said reconciling the liberal and conservative “deep stories” will be challenging and requires building “small bridges” of human connection and understanding on both sides.

“I do think that we are locked in a deep struggle for the soul of our country,” she said.

“Time is limited. This isn’t something to wait for, because it could happen [that] at some time in the next four years, a national disaster occurs or we go to war and a state of emergency is declared. And so [then] the rhetoric becomes ‘loyal and disloyal Americans,’ and this division that’s already there becomes exaggerated, or worse.”