On Russia, watch the ball 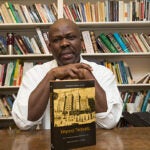 A deeper sense of Muslim Africa

Although the news spotlight is shining on questions about possible collusion between Russia and President Trump’s campaign organization, Russian-American journalist Masha Gessen cautions against making that concern the key focus of national attention.

Instead of becoming preoccupied with the unfolding Russian story, Americans should remain actively engaged in politics if they want to safeguard the health of this nation’s democratic institutions, Gessen said Tuesday during a talk at the Shorenstein Center on Media, Politics and Public Policy at Harvard Kennedy School.

“I think we have things to protect that the obsession with Russia isn’t necessarily conducive to protecting, and the thing we have to protect is politics,” said Gessen, who was joined at the talk by Nicco Mele, director of the Shorenstein Center.

Gessen, who spent most of her life in Moscow but now resides in New York City, is author of the 2012 best-seller “The Man Without a Face: The Unlikely Rise of Vladimir Putin,” and of the upcoming book “The Future Is History: How Totalitarianism Reclaimed Russia.”

“Politics is an opportunity for people to act meaningfully out in the open … When we are focused on reviewing secrets rather than on acting out in the open, we are doing damage ourselves to our ability to act American,” Gessen said. “I’m not saying there shouldn’t be an investigation, [but] it should not be the sole or even the main focus of people who are concerned with protecting democracy under Trump.”

Gessen suggested that fixating on Trump’s Russian links is also a kind of “crutch” for some Americans, providing them with a too-ready explanation for his election and an unrealistic hope that the investigation somehow will drive him from office.

Her experience as a journalist in Russia taught her how difficult it is to report without access to reliable information, Gessen said, since “when you stop being able to ask questions of officials, when officials are lying to you … you can’t rely on court records.” She said that was an important lesson for American journalists at a time when some of them are embracing the role of “reporting from the outside.”

“When you can’t find solid footing on any of the normal institutional supports that journalists use, you enter this squishy territory of the believable rather than the provable,” she said, “and I just don’t want us to be hurrying into that territory by trafficking in the believable while we still have most of the tools of corroboration.”

Gessen said she has come to believe that “conspiracy thinking actually is something that happens when the unimaginable happens. And that’s why there is so much conspiracy thinking about the Trump election. It is not because we lack explanations or information about how Trump got elected.”

She said the danger in conspiracy thinking is that it “responds to the needs of the human mind for a simpler explanation. And that also means that it keeps us from facing the mess that we’re in.”

“If you are looking for secrets to be revealed,” Gessen said, “you are not acting in the public sphere … I think we are facing an actual threat to politics, to public action … and to try to be looking behind the scenes instead of acting publicly, I think, can be dangerous.”

On other topics, Gessen said it would be a mistake to assume that last weekend’s popular protests across Russia were aimed at Putin or even were necessarily political in nature.

“These are protests against corruption, they are protests … for good government. They are not protests against the regime,” she said, adding that the participants “want an end to the daily humiliation of living in a profoundly corrupt state. They want, I think, a kind of public decency observed.”

“You can stage anti-corruption trials. You can take a page out of China’s book and start jailing or educating local officials for corruption,” she said, adding that Putin could combine those measures with a political crackdown.

And she said some of that sentiment was rooted in “the failure of Russia to reconceptualize itself in the early ’90s. Russia never became a post-imperial country. Russia never found a way to think of itself as anything but a great power.”