If it’s going to rain, Mr. President, just say so 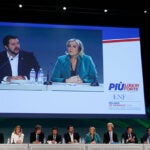 Throughout U.S. history, the question of how much secrecy is justified in a democratic government has been a subject of recurring debate. It is an issue that has long absorbed Mary Graham, co-director of the Transparency Policy Project at the Kennedy School of Government.

In her new book, “Presidents’ Secrets: The Use and Abuse of Hidden Power,” Graham traces how some presidents have intentionally or inadvertently cloaked governmental actions in excessive secrecy, and how others have helped usher in greater openness.

The Gazette spoke to Graham about her view that presidents and the nations they lead suffer from overly secret policies, and the prospects for transparent government under President Trump.

GAZETTE: Your books seems a clarion call reminding us both how important and how fragile transparency and openness is to a democratic government. What makes you passionate about that message?

GRAHAM: All my work has been about the informed public, really from the time I was a high school and college journalist. I was on The Crimson at Harvard at a time when the University was pretty opaque, much more so than it is now, and so one thing we tried to do was to report to students and faculty what was going on behind closed doors. Then as a young lawyer I worked in one of the most secretive parts of the federal government, the Office of Management and Budget, where it was not supposed to be known how the fights within the executive branch were being settled. And then in the early 2000s I worked with Archon Fung and David Weil to start the Transparency Policy Project at the Kennedy School. My motivation for doing that was that I didn’t think anybody should die for lack of information. I had studied auto safety, for example, and I could see that the experts in the government knew about safety defects often years before that information got to the public.

My view has always been the public is used to imperfect information. We get weather forecasts every day that tell us probability — it may rain or it may not rain — and I would think that now should be a time when we trust the people with the information, however imperfect it is.

GAZETTE: Excessive secrecy has been a problem throughout our history. Are we doomed to keep repeating ourselves?

GRAHAM: No, times are changing. As I say in the book, we’ve changed our minds several times about secrecy. A lot of it has to do with the character of the president who’s in office at the time there’s a crisis, or change in technology as we’re having now.

What we learned from the Bush and Obama administrations is that secrecy no longer works. By that, I mean secret policies. There has probably been no more important a time for secret operations. The intelligence agencies have been given a new mission after 9/11, which is to prevent attack. To do that, they need to identify networks, and it’s a very, very difficult task. But that Cold War idea that some policies were going to be open and some policies the American people would never know about, assassination plots or bribery schemes or election fixing — I think what we learned from Bush and Obama is that that no longer works.

When President Obama tried to keep the phone records program that was initiated by President George W. Bush, he did everything that was appropriate for 20th-century limits on presidential secrecy. He informed congressional leaders, he worked with the Foreign Intelligence Court. What he did not do was to inform the American public until it leaked. And my conclusion on that and issues like the use of new weapons like drones and cyber attacks, is that it no longer works to keep major changes in policy secret, especially when they affect Americans’ rights and values.

You can imagine President Obama giving one of his very good, thoughtful talks to the American people about the need for something like the phone records data, and people understanding that, but instead, keeping it secret, he really ceded leadership to the media and to his opponents in Congress because they then controlled the timing and the content of how that program was explained.

GAZETTE: After 9/11, the American public seemed to accept greater restrictions on freedom and more secrecy in government as a price for security. Are we now moving in the other direction?

GRAHAM: The Cold War assumption was that in order to have security, especially in times of crisis, Americans needed to give up some liberty. Of course during the Cold War they gave up that liberty without knowing it — surveillance policies which got out of hand and were applied to Civil Rights leaders and war protesters. The idea was that that was necessary and the idea was that the president needed to be more powerful.

But that was not the founding idea at the Constitutional Convention or in George Washington’s understanding of government. I think we’re getting back toward the founding idea, which is that secrecy would be carefully circumscribed. In the 1780s the survival of the nation was in doubt: There were foreign threats, the domestic economy had collapsed, and there were bankrupt farmers rioting. Yet at that time they decided not that they should have an all-powerful president. It was an idea of the Founders that the president’s powers particularly should be limited in that time of emergency. It was also their idea and the insistence of the states in ratifying the Constitution that individual rights had to be explicitly protected. This was a time where the threats were much worse than they are now and yet the states are saying in this kind of security emergency we must assure that there will be freedom of the press, freedom of the religion, freedom of assembly, and particularly important today, privacy of individuals in their homes and of their papers.

Americans have been known to give up their liberty in bits and pieces when they are asked. What they don’t like are surprises when it comes to their rights. … I think open debate, which doesn’t always produce good results, is the best we’ve got, because it’s the best technique we have to assure that the policies are legitimate and that Americans can trust their government.

GAZETTE: Based on the first weeks of President Trump’s administration, are you worried or sanguine about where we are headed in terms of an open government?

GRAHAM: What is unique about President Trump is the odd combination of swamping the public with distracting information and at the same time practicing particularly dangerous kinds of secrecy. So there was news in his [Feb. 16] press conference, but it was buried under an avalanche of invective. That is not being considerate and respectful to the American public who are waiting for foreign policy, who are waiting for a plan to help working people. His tweets are not transparency and these insults and this name-calling, governance by name-calling, doesn’t work. In addition we are seeing that he is not willing to make routine disclosures about his taxes or his health. He has a tendency to be angry at people who have different points of view. And I think we see from our history is that that’s a sign that this president is going to be very tempted to do things behind closed doors to avoid democratic debate.