A deeper sense of Muslim Africa 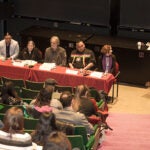 Ousmane Kane, the Prince Alwaleed Bin Talal Professor of Contemporary Islamic Religion and Society and professor of Near Eastern Languages and Civilizations in the Faculty of Arts and Sciences, will discuss his book, “Beyond Timbuktu: An Intellectual History of Muslim West Africa,” at the Center for the Study of World Religions on April 3 at 5:15 p.m. The talk is co-sponsored by the Islam in Africa Speaker Series.

Kane delivered the keynote address  in February at the Divinity School conference “Text, Knowledge, and Practice: The Meaning of Scholarship in Muslim Africa.”

The Gazette interviewed Kane to illuminate the roots and influence of Islam in Africa, which is home to nearly 30 percent of the world’s Muslims.

GAZETTE: What is the most common misconception the West has about African Muslims?

KANE: Black Africa has been represented in academia as well as in popular representations as a continent of warring tribes. Look at the coverage of Africa in most TV channels. It is most of the time about tribal conflicts. What I argue in my book is that large sections of West African peoples have, in the past and the present, proven their ability to transcend parochial identities and differences in a common cause and have indeed claimed their independence of thought and common destiny. More than anything else, this is embodied in a long literary tradition in the Arabic and in African languages written with the Arabic script. Unfortunately, this literary tradition has been obscured by Western discourses of the past century that tended to represent black Africa essentially as a continent of orality. In doing so, these discourses have obscured its literary tradition.

GAZETTE: How did Islam spread from the Arabian Peninsula to the rest of Africa?

KANE: Islam has a very long history in Africa. In fact, it was introduced in the African continent even before it spread in Arabia, let alone the neighboring countries of the Arabian Peninsula. The prophet Muhammad sent dozens of his companions to Ethiopia before the beginning of the Muslim calendar. During the first century of the Muslim calendar, Islam spread from Egypt through the Red Sea and the East African coastal areas on one hand, and from Egypt across the desert to the rest of North Africa on the other hand. It is from North Africa that it was introduced to West Africa across the Sahara.

GAZETTE: Your book’s title is “Beyond Timbuktu: An Intellectual History of Muslim West Africa.” What is the significance of Timbuktu, the ancient city in Mali, in the history of Islam?

KANE: Timbuktu is famous as a great center of trade and Muslim learning from Islam’s Golden Age. It is renowned for its many old mosques and colleges and for its collections of rare Arabic manuscripts. For centuries, it has attracted Muslim scholars and merchants, but Timbuktu was not unique. It was only one among many scholarly centers that flourished in West Africa in the last several centuries. My book charts the rise of Muslim learning from the beginning not just in Timbuktu, but in other parts of West Africa as well, to the present. It also examines the shifting contexts that have influenced the production and dissemination of Islamic knowledge.

GAZETTE: What other places in West Africa have the same significance as Timbuktu? Where do the majority of Muslims in Africa live?

KANE: Other prominent centers of Muslim learning in West Africa include Agadez [Niger], Walata and Shinqit [Mauritania], Djenné [Mali], Kaolack, Pire, Koki [Senegal], and Kano, Katsina, and Borno [Nigeria], to cite just a few. The number of Muslims in Africa is estimated between 450 and 500 million. This is close to a third of the Muslim global population. The overwhelming majority live in the northern half of the continent above the Equator. In North African countries like Morocco, Algeria, Tunisia, Libya, Egypt, and West African countries like Senegal, Mali, Mauritania, Niger, more than 90 percent of the population is Muslim. With more than 80 million Muslims, Nigeria has the sixth largest Muslim population in the world after Indonesia, Pakistan, India, Bangladesh, and Egypt.

GAZETTE: What are West Africa’s contributions to the development of Islam?

KANE: Africans have influenced scholarship throughout the Islamic world for more than a millennium. This has been fully documented by recent research on the literary cultures of West Africa, and particularly the manuscript heritage. With the spread of Arabic literacy, African scholars developed a rich tradition of debate over orthodoxy and meaning in Islam. The rise of such a tradition was hardly disconnected from centers of Islamic learning outside of Africa. In Timbuktu, Cairo, Mecca, and Baghdad, African scholars have played significant roles in the development of virtually every field of Islamic sciences. A glance at the writings and curriculum of West African Muslims shows that they cite works from the entire Muslim world. This is evidence that they participate in a global network of scholarly exchange.

GAZETTE: Why is it important to write a book about Muslims in West Africa and Africa in general?

KANE: I hope that the book will correct misconceptions in both the West and the Middle East that West Africa’s Muslim heritage represents a minor thread in Islam’s larger tapestry. I also hope that they realize that African Muslims in general have never been isolated. Neither the Red Sea nor the Sahara had ever been an insurmountable barrier to communication. On the contrary, they were bridges that allowed Arabs and Black African Muslims to maintain close relations through trade, diplomacy, and intellectual and spiritual exchange.