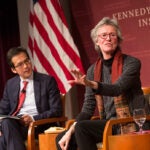 Panelists ponder the future of journalism in a click-happy, unsourced world

That “fake news” is both pervasive and dangerous is no longer in doubt. How best to respond, however, is still an open subject. Because of that, the topic made for a lively panel Thursday at the Berkman Klein Center for Internet and Society.

Moderating the discussion, titled “Fake News, Concrete Responses: At the Nexus of Law, Technology, and Social Narratives,” Martha Minow, dean of Harvard Law School, began with a basic question: What is fake news? The range of possibilities, said Berkman Klein Fellow An Xiao Mina, is broad enough to render the term almost meaningless, and can encompass everything from “when an Onion article is cited as news to dealing with state-sponsored propaganda botnets.”

Professor Jonathan Zittrain, George Bemis Professor of International Law and co-founder of the Berkman Klein Center, offered a definition based on intent, defining fake news as that which is “willfully false,” which he said means a story “that the person saying or repeating knows to be untrue or is indifferent to whether it is true or false.”

As Minow pointed out, propaganda has been around forever. However, much of what we now recognize as fake news is complicated by a “kernel of truth,” noted Nathan Matias, a Ph.D. candidate at the MIT Media Lab. “So if you go to Google, you might feel as if you fact-checked it.”

To formulate a response, Mina said it is necessary to understand how fake news spreads — the “cultural logic” that makes it attractive to a particular audience.

“Often the reason things spread is not about truth or falsehood, but about affirmation,” said the technologist, who is the product director for the journalism-focused software firm Meedan. “People are looking for validation.”

Drawing on her studies of middle school and high school students, Sandra Cortesi, a fellow and director of youth and media at Berkman Klein, suggested a slight shift in focus. Rather than asking news consumers to evaluate “what is true and what is false,” she said, a more revealing question would be “what do you value?”

“What news actually means to young people is quite different from what it means to adults,” she said, broaching how affirmation can influence what people look for — and, thus, what they read and believe.

Zittrain put this shift in historical context. As recently as a decade ago, he said, the public assumed there was a source of consistent information that could be trusted, the so-called mainstream media. “That model is scrambled now,” he said. “If you pump enough stuff out there, it’s hard to tell the reliable stuff from the nonreliable stuff.”

News organizations themselves can strengthen both their practices and their readers’ trust with transparency, the panelists said.

Mina’s firm is working on Check, a platform for collaborative verification of digital media that has already been used by organizations such as ProPublica and Amnesty International. This effort and others like it have the potential to strengthen credibility and educate a new generation about news gathering and journalistic ethics, she said.

However, society’s infatuation with clicks will continue to clash with the complexities of news, the panelists agreed.

“People like ‘likes,’” said Zittrain. “The problem is that there is no button to click that says, ‘I am having a subtle thought.’”