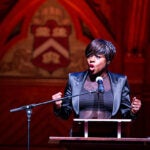 Fresh off Oscar win, another honor for Davis

What do you do when earthy potatoes are part of a contemporary artwork in one of the most important University museums in the country? Well, you act like a savvy shopper. You monitor the product closely and you make regular trips to the grocery store.

Such is the care needed for a sculpture resembling a quirky science experiment in the first-floor modern and contemporary galleries of the Harvard Art Museums. Despite the shopping-cart component, though, “Analogia I” by Argentine artist Victor Grippo is a serious piece, one of the museums’ many works by artists who were redefining their field in the 1960s, ’70s, and ’80s.

“Analogia I,” consisting of a series of small potatoes nestled in individual square compartments and connected to wires, electrodes, and an electric meter, was created during the political upheaval in Argentina in the late ’60s and early ’70s, when government censorship and even brutality were the norm, said Mary Schneider Enriquez, Houghton Associate Curator of Modern and Contemporary Art.

“It was something that at an art exhibition was not legible, readable, by the authorities as something that was transgressive,” said Enriquez. “But it was a very deliberately appointed statement: We will survive despite the oppressive climate you’ve put us in and the freedoms we don’t have.”

The wires attached to the potatoes and the meter registering the amount of energy they produce represent connectedness, determination, and community energy and spirit, said Enriquez. Grippo’s use of potatoes, a basic food source in South America, heightened the work’s universality.

By varying artistic materials, Grippo, like his contemporaries, was redefining the nature of artistic expression and the meaning of beauty. He was also inviting the public more fully into the artistic experience. Though it’s nonfunctional now to help preserve the work, “Analogia I” includes a button that at one time viewers could press to see the amount of energy being generated by the wired spuds.

“Engaging the public in his work was key, and it was typical of his work in the ’60s,” said Enriquez, noting that other pieces in the gallery reflect similar impulses. Nearby hang works by Korean-American artist Nam June Paik and German artist Joseph Beuys, both members of the Fluxus movement who used everyday materials “as a way of expressing what Beuys called social sculpture,” said Enriquez, “work in which you, the viewer, participated in, responded to what those materials were.”

She singled out Beuys’ “Telephone T–R [mirrored R],” two metal cans attached by twine to form a rudimentary telephone. “Very basic things became part of what an artist used to create an expression and a means of engaging you, the public, in their work,” said Enriquez. “So putting Grippo in that context makes enormous sense.”

But a work that’s based on food that can spoil needs particular and regular upkeep. Museum staff members have to monitor the work for signs of mold that could hurt other works in the gallery. About every three weeks the potatoes are rotated out and the wires and electrodes are cleaned. During trips to the grocery store, museum staffers take along a small box, the size of the boxes in Grippo’s work, to make sure the new spuds will fit in the sculpture.

This piece, said Enriquez, “really requires us to be on top of its wear and care.”