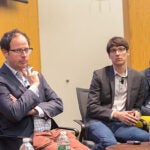 The puzzle in politics and polling

The good news is the prospect of a one-step solution for America’s opioid epidemic.

The bad news — according to former Vermont Gov. Peter Shumlin, speaking at the JFK Jr. Forum on Wednesday — is that taking that step won’t be easy.

“The crisis is 100 percent avoidable,” Shumlin told the audience. “And the solution is to stop handing out [opioid prescription drugs] like they’re candy. Full stop, that’s what we’ve got to do.”

The panel, “Examining America’s Opioid Crisis,” opened with moderator Sheila Burke, a lecturer in public policy at the Harvard Kennedy School, citing statistics to show that the description “opioid crisis” is no exaggeration. The overdose rate from prescription opioids such as OxyContin has quadrupled since 1999, and in 2015 there were four times as many deaths from opioids, both prescription and illicit, as there were from gun violence. More than 2 million painkiller prescriptions are written annually. Last year, the surgeon general sent a letter to 2 million physicians warning of their dangers.

Shumlin, now a visiting fellow at the Institute of Politics, brought a unique perspective to the conversation. As governor, he declared in his 2014 State of the State address that heroin use — largely by patients who’d gotten addicted to OxyContin, and then turned to street drugs as a cheaper and readily available substitute — had become epidemic in Vermont. The speech got nationwide coverage, including a major feature in Rolling Stone, “The New Face of Heroin.”

“I always wanted to get on the cover of Rolling Stone, but not that way,” Shumlin said Wednesday. “I took a lot of heat for that speech, and the tourist industry went nuts. The State of the State is usually where you talk about nice things like our skiing or maple syrup.” 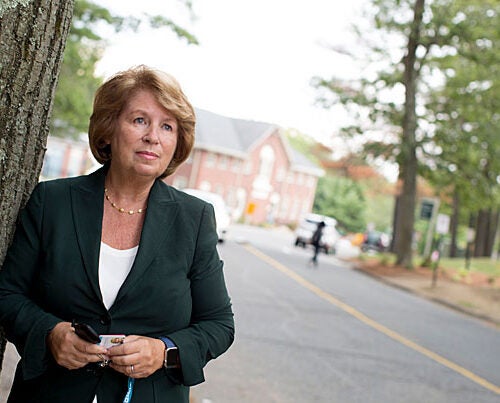 Stages of losing control, on the street and in the body

Vermont took steps including decriminalizing opioid abuse, so that the cost of incarcerating an addict for a year — more expensive, he noted, than a year’s tuition at Harvard — could be applied to treatment. The state also tightened its standards for prescribing painkillers.

“We now have the least number of pills you can prescribe for nonserious issues, so we’re making progress,” Shumlin said.

But the underlying problem hasn’t gone away, he added.

“No one will take on Big Pharma and say, ‘Why don’t we go back to where we were when aspirin and Tylenol were prescribed, instead of giving them heroin in pill form?’ Money is the problem.”

David Armstrong, a senior executive reporter at STAT, a Boston Globe-affiliated health publication, said that when he began investigating the early marketing of OxyContin, he mostly found sealed documents.

“It’s important to realize how we got here,” Armstrong argued, citing early claims by Purdue Pharma that its OxyContin product was nonaddictive. (Those claims led to a $600 million fine.)

Opioid prescriptions, Armstrong noted, are now so widespread that one of the hottest new medical products is a drug that treats constipation in opioid users. That product, he said, has been licensed to Purdue.

While the influence of pharmaceutical companies is certainly an issue, former U.S. customs commissioner Gil Kerlikowske zeroed in on a range of others.

“There is a lot of finger-pointing going on, including doctors who overprescribe,” said Kerlikowske, who is now an Institute of Politics resident fellow. “But nobody can prescribe these painkillers without a license from the Drug Enforcement Agency — so are they doing enough?”

He noted that the process of hospital accreditation creates its own problems. “If a patient leaves a hospital and says they’re in pain, that hospital is going to be in trouble. So the hospital will want to do everything it can to make sure that doesn’t happen.”

A Q&A session followed the panel. One student said that the epidemic had to affect white suburbia before it was seen as a significant health issue. Shumlin agreed.

“Not to be glib here, but this is true of every issue: If it doesn’t hit the soccer moms, it doesn’t get a response. And this one has hit them.”

An online course, “The Opioid Crisis in America,” launched this week through HarvardX. The course looks at the development of the epidemic and options for treatment and recovery.