The problem with U.S. secrets 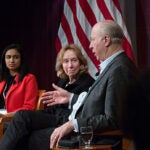 Drawing wisdom from the young

Secrets are often harmless, but they can prompt major problems when they happen at the highest levels of government.

So what are the consequences when a U.S. president is dangerously preoccupied with secrecy? According to author Mary Graham and Brookings Institution fellow Norman L. Eisen, both panelists at a Harvard Kennedy School gathering Monday evening called “Presidential Secrecy from Washington to Trump,” that question is particularly relevant with a new administration taking charge.

Moderated by Kennedy School Academic Dean Archon Fung, the Ford Foundation Professor of Democracy and Citizenship, the panel discussed issues involving the Trump administration. But both panelists set their views in a historical context. Graham, who is co-director of the Kennedy School’s Transparency Policy Project and author of “Presidents’ Secrets: The Use and Abuse of Power,” said that only three presidents have ever been transparent: George Washington, and to a lesser extent Gerald Ford and Barack Obama.

She said that every other administration withheld some crucial information, whether about Woodrow Wilson’s stroke, Richard Nixon’s burglaries, or Bill Clinton’s affairs. “Secrecy turns out to be the president’s greatest power,” she said. “And if not controlled, it’s also the greatest threat to democracy.”

Playing devil’s advocate, Fung asked whether too much transparency also might paralyze the government. Eisen, who was U.S. ambassador to the Czech Republic under Obama, countered that transparency was more of an advantage. Citing his own earlier work in helping craft the Dodd-Frank law on Wall Street regulation, Eisen said that “We conducted that in an extraordinary atmosphere of openness, from releasing our administration blueprint to the public before Congress had done its drafting. In the end, we got 80-90 percent of what we asked for, so it didn’t cause any gridlock.”

In response to a student question, Eisen said that even Obama felt the need to be somewhat secretive when conducting controversial drone strikes against suspected terrorists. “There are times when you have competing moral imperatives,” Eisen said. “And I know that was something the president struggled with.”

Still, both panelists agreed that it was a problem when President Trump implemented his travel ban on immigrants from seven mostly Muslim countries. “I think the president owes us an apology,” Graham suggested. “He kept his plans hidden not only from his advisors, but from the lawyers and from the agents who would have to carry it out, and it was disruptive to thousands of immigrant people. I think this is a particularly dangerous moment, because nothing can stop a president who wants to do harm behind closed doors. Accountability is after the fact, and we don’t have a way to stop a president who wants to do something unwise, foolish, or illegal.”

Both panelists expressed concern that Trump, the oldest elected U.S. president, has yet to make public his medical records or his tax returns. “I worry a lot about corruption,” Eisen said. “And I think that darkness is an enabling factor for corruption. It has a corrosive effect on government decision-making, and those decisions can cost people their lives. We need to know, for example, about the relationship with Russia. It pops up and occupies the media, then it submerges again. The president says he has no business dealings with Russia, and his son says they have money pouring in. So which is it? Our founding fathers were so concerned about this that they wrote a conflicts clause into the Constitution.”

An audience member pushed further, asking whether media scrutiny has devolved into infotainment. “With the new phenomenon of reality TV, I’m surprised it took as long as it did for a Donald Trump” to arrive, Eisen replied. “The traditional media was slow to react. They maintained the ‘he said, she said’ approach and the wall between editorial and coverage. But when you have a political virus in the system, you can’t maintain those practices.”

The upside, said Graham, is that the new era of government secrecy is likely to be an age of activism.

“That’s where my book ended, on an optimistic note,” Graham said. “I don’t think limits on secrecy have ever depended on the Congress and the courts. They depend on the courage of individuals. And there are more people watching now than there ever were before. You can’t keep secrets from a democracy for very long.”