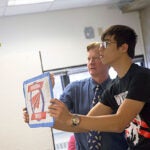 The key to working better, sleeping better, and feeling better could be rooted in the design, maintenance, and operation of the buildings where we spend the majority of our time, a new Harvard study has found.

The national study, conducted by researchers at the Harvard T.H. Chan School of Public Health’s Center for Health and the Global Environment (CHGE) and SUNY Upstate Medical, is the first to show that working in high-performing, green-certified buildings can improve employee decision-making using objective cognitive simulations.

Researchers looked at 10 high-performing buildings in five cities across the United States, including Harvard’s double LEED Platinum Blackstone South building. The team collaborated with the Office for Sustainability (OFS) and Harvard Real Estate to use Blackstone as a “living laboratory” to study the relationship between building conditions and occupants’ productivity and well-being.

“Our University is the perfect test bed for innovation and research related to buildings and health. Through our partnership with the Office for Sustainability, we were able to kick off our study at the Blackstone buildings at Harvard before scaling our research to four other cities across the U.S.” said Piers MacNaughton, a postdoctoral fellow at Harvard Chan School and project manager for the study.

Twenty-four Harvard employees agreed to participate in the weeklong health assessment, which included two cognitive function tests, daily surveys, and wearing watches that tracked sleep quality. On each testing day, environmental conditions, such as thermal conditions and lighting, were also monitored in each participants’ workspace.

On desktop, click and drag your mouse for 360° views. On mobile, use the YouTube app to watch these videos, and move your phone to explore. With a headset, such as Google Cardboard, use the YouTube mobile app to load the video and look around.

In addition to the overall effect from being in a better building, several specific factors were found to have impacts on participants’ cognitive function scores. The high-performing, green-certified buildings used in the study had environments more frequently within the thermal comfort zone defined by the American Society of Heating, Refrigerating, and Air-Conditioning Engineers (ASHRAE) organization, which resulted in 5.4 percent higher cognitive function scores. Brighter, blue-enriched lighting, such as daylighting, in the green-certified buildings was also associated with better sleep quality at night, which in turn led to better cognitive performance the following day. This finding supports research showing the impacts of lighting on circadian rhythm; a bigger contrast in daytime and nighttime light exposures can help regulate the release of melatonin, the hormone responsible for inducing sleep. 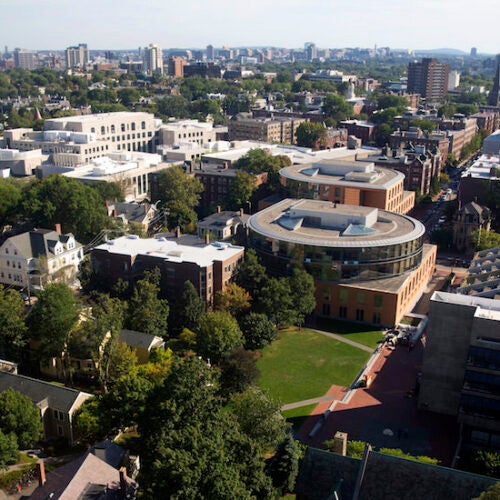 “Our goal is to improve the health of all people, in all buildings, everywhere, every day. To do this we are merging building science with health science and advocating for what we call ‘buildingomics’ — a new approach that examines the totality of factors in the building-related environment that influence human health, well-being, and productivity,” said Joseph Allen, assistant professor at Harvard T.H. Chan School of Public Health and principal investigator of the Healthy Buildings program at the Harvard Center for Health and the Global Environment. “We are passionate about moving science out of public health journals and into the hands of decision-makers, so we developed ‘The 9 Foundations of a Healthy Building,’ a concise synthesis of 30 years of scientific data on the key elements that make buildings healthy.”

The research grew out of the team’s previous COGfx Study, which found cognitive function scores doubled when participants were in simulated green building environments with enhanced ventilation compared to environments representative of conventional buildings. For this study, the team built on those results by going from the lab to real building environments, concluding that even in buildings that have high ventilation rates and low chemical concentration, there are additional benefits of green certification, and factors such as lighting and thermal conditions, which may improve the work and health of occupants.

Jack Spengler, Akira Yamaguchi Professor of Environmental Health and Human Habitation, the co-principle investigator of the study, placed this study in a larger context. “When you think of the urbanization that is going on around the world, we will see a doubling of our built environment before the century is over. We better do it right — energy wise, material-wise, and to optimize the human condition in those environments.”

In related research, CHGE recently received the inaugural grant from the Office for Sustainability’s new Campus Sustainability Innovation Fund to study and quantify the health impacts of biophilic design, the concept of introducing nature into the built environment. The team will use the grant to fund a mobile virtual reality lab to simulate exposure to indoor environments, and to recruit student and staff participants to monitor in the lab and in Harvard buildings with varying levels of natural elements.

The fund is part of Harvard’s reinvigorated “living lab” initiative, which encourages and supports projects that use the campus as a test site for developing solutions that enhance well-being and mitigate climate impact, or help neighboring communities tackle these problems. As part of this effort, OFS and CHGE are engaged in a multiyear partnership to use campus spaces to inform public health research and apply the findings in capital projects and renovations, such as House renewal.

“It is especially important now to be taking the evidence presented to us through scientific discovery and acting on it as an institution and as individuals,” said Heather Henriksen, director of the Harvard Office for Sustainability. “Exciting possibilities for scaling change result when we use the campus to inform research and then translate the findings of that research into practical changes in the way we construct and operate our buildings.”

Blackstone was the first building in New England to receive a second platinum certification from the U.S. Green Building Council under the LEED for Existing Buildings: Operations and Maintenance program. Originally awarded in 2007 under the LEED for New Construction rating system, it was the first building at Harvard — and in all of higher education — to achieve LEED Platinum. Driven by the University-wide Sustainability Plan and the research of its faculty, Harvard is committed to building and operating healthier, more productive spaces. With 113 LEED-certified spaces, the University currently has more certified projects than any higher education institution in the world.

In addition to numerous energy and water-reducing strategies employed at Blackstone, the building’s indoor environmental quality was and remains a priority for the management team. An indoor air-quality plan was implemented during construction that minimized dust; all carpet, fabric, adhesives, and paints are nontoxic; a green cleaning program is used; more than 90 percent of occupants have access to daylight; windows and ceiling fans are operable; and views of the Charles River were emphasized as part of the design.