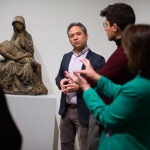 As precede, he talks with co-writer and Harvard instructor about the craft

The festival begins Friday and ends Saturday in a conversation with novelist Tom Perrotta, author of “The Leftovers,” and Nick Cuse ’13, who writes for the adapted version of the work for HBO television with Perrotta. The talk will begin at 7 p.m. in Fong Auditorium, Boylston Hall.

The two authors, along with Bret Johnston, head of Harvard’s Creative Writing program, spoke with the Gazette about what goes on in a writers’ room, why writing isn’t a special-occasion activity, and what about the television show improves on the book.

GAZETTE: How did you learn to write?

PERROTTA: I’ve had much more of an old-school writing education. I took a lot of undergrad classes, and then got my M.F.A. at Syracuse in the mid-1980s with Tobias Wolff. I came out expecting to be a fiction writer full time, which I did for a number of years. I also taught creative writing at Yale and at Harvard Extension School for a number of years. My challenge was figuring out how to balance my life as a writer with life as teacher. About 15 years ago, I stopped teaching and switched to screenwriting, in addition to my work as a novelist.

CUSE: My experience was different. I grew up making movies with my friends right when you could first get a cheap video camera and edit a movie on your computer. That was my hobby. We would conceptualize and write stuff down and film and edit all together. There was something appealing to me about going to school and studying that wasn’t directly continuing from that. I studied English, which was reading and analytical, but I also took fiction with Bret Johnston. A lot had been in my mind, telling stories through little videos that I had never thought of in a more academic way. I’ve been able to apply the way we discussed prose to what I do now, which is again making videos, although they’re a little more expensive now if they’re for HBO. It came full circle.

JOHNSTON: When you’re watching a show like “The Leftovers,” you feel like you’re getting as much from literature as what you get from television because these writers have a background in fiction. It converges in a way that feels like where we are in the culture at large. TV is in such a great place because it has so many sophisticated writers making it. When I think back to Nick in class, I remember how incredibly astute he was in the way he read other people’s stories and offered suggestions on how things could be fixed. Week by week, I watched him inhabiting himself as a writer more and more fully.

PERROTTA: That happened at the show as well. He started as the assistant in the writers’ room. It’s an entry-level and mostly silent position. In three years, he became a very important colleague in the room and changed the course of the show in very crucial ways. I was the oldest person in the room, and Nick was the youngest. In the end, I don’t think it mattered to either of us.

GAZETTE: Tom, what was it like to take your novel from the solitary experience of author to a room full of writers who would define it as a TV show?

PERROTTA: When I wrote the book, I knew I wanted to turn it into a TV series. It felt like the natural place where I didn’t have to shove my novel into a feature film format. I was coming from a realistic literary tradition, and Damon Lindelof (co-creator of the TV adaptation) is a very much pop-culture guy. It was such an act of faith on both our parts to find a voice that could include all of the influences we were bringing. It wasn’t always easy to do. There were moments of frustration — that’s what collaboration is. “The Leftovers” the show is very different from the book. Yet parts of the book remain strong throughout. Nick knows there were rocky moments along the way, but all the struggles were ultimately for the benefit of the show.

The writers were such a revelation to me. Everyone had to explain his/her choices in real time. We’d reach a fork in the road [where] you could go this way or that way, and then someone might come in with a third way. I would be interested in making a class out of a writers’ room. People could learn a lot over watching other writers think and argue over choices.

CUSE: People tend to leave out of their imagination one aspect of what a writers’ room is like — which is the time spent laughing and joking with each other. You feel very close to these people, which allows you to share and take risks with your ideas. I didn’t think of Tom as the writer of the book, which, I think, is a huge compliment. It requires a tremendous amount of generosity to not let people think of you as author of this book. It was a level playing field, which is why it was such a successful collaboration.

PERROTTA: I did feel like I had to argue for my ideas the same way everyone else did. There were times people had great ideas that made me wish I could go back to the novel. I’ll give you one example: In season one, there were these “Loved One” dolls people use to grieve. They’re very accurate computer-assisted replicas of people who disappeared. In any case, they originated as a world-building exercise where we tried to imagine all sorts of social changes caused by the “sudden departure.” The “Loved Ones” were such a cool idea that we went back to them again and again over the course of the season, and used them prominently in the finale.

GAZETTE: Where do you find emotional gravitas in a story?

PERROTTA: Some writers live in their private worlds, but I am somebody who does try to react in real time to current events. The book “Election” emerged from the 1992 election, and “Little Children” was inspired by a national debate about sex offenders and their place in the community. “The Leftovers” had its roots in both public and private events. I was reacting to 9/11 and the economic collapse of 2008, while also dealing with the emotional fallout from my father’s sudden death in a car accident. I also write from obsession, things I can’t stop thinking about.

CUSE: I’m a little more looking outward to inward. I’m a fairly curious guy, and I read and watch a lot of stuff, looking for things that are interesting and stick in my head. If they stick in my head, then I know they are personal to me in some way. The idea of them lingering compels me to put them in a story.

GAZETTE: We are only days into the Trump administration, and these seem like surreal times. How are you thinking about events in terms of your art?

PERROTTA: “The Leftovers” is, in one way, a critique of apocalyptic thinking. We have been obsessed that something terrible was about to happen, that there was a collective loss — of faith, of art, of climate, of viruses, all these artistic expressions — and our future was no longer guaranteed. Everybody feels the apocalypse is on the way, but the world looks the same. I feel the world has caught up with us.

CUSE: I think about the Eden collapse myth — that there was a garden where everything was perfect, and we messed it up. There’s something so attractive about that story. The good times are over, and now it’s bad times. That story has always been a successful story to tell. And its magnetic pull is particularly strong now. But any version of the future is a story because we don’t know what it is going to be yet.

PERROTTA: [President] Trump was telling it from another standpoint. Let’s go back to that perfect time. We’re all looking at the same narrative but from different places on the timeline. For Trump voters, that was their paradise. It was their mythical time that allowed you to take care of your family. Any story about a glorified past has deep roots.

GAZETTE: What is your advice for young writers, especially when they are struggling with writing?

PERROTTA: You can see it in the different paths we took. I would encourage young writers to not get too hung up on one format over another. There are all sorts of ways to be a writer right now, so jump around. Learn to treat writing as a job. Separate it from something you do on special occasions when you feel inspired. It’s work. It’s wonderful work, but the sooner you treat it as work, the faster you’ll become a real writer.

CUSE: Schedule your writing in advance. If it’s in your schedule and you follow your schedule, it solves a lot of your problems, [including] writer’s block, which maybe wasn’t really there in the first place. It helps me to ask myself, “What do I really like?” or “What book or movie am I excited about when it’s coming out?” It gets me excited to think about what makes me more productive.