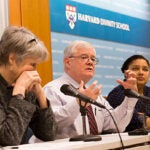 Neil M. Gorsuch, a 1991 graduate of Harvard Law School (HLS), is President Donald Trump’s pick as the next justice of the U.S. Supreme Court, it was announced Tuesday night.

Gorsuch currently serves as judge on the U.S. Court of Appeals for the 10th Circuit. President George W. Bush nominated him to that court in 2006.

“I also send thanks to Judge Gorsuch for his devotion to public service, to the rule of law, and to the administration of justice. His work as a federal judge, scholar, teacher, and lawyer in both public and private practice, show commitment to rigorous thinking and fairness, and the nation is fortunate to have the benefit of his talents.”

Gorsuch returned to Harvard Law School in 2009 to speak to students as part of the Traphagen Distinguished Alumni Speakers Series, a series that invites noted HLS alumni back to campus to speak about their careers.

While a student at HLS, he was an editor on the Harvard Journal of Law & Public Policy.