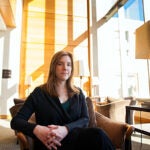 Authoritarianism appears to be rising in U.S., but fascism does not, panelists say

Fascism is not taking root in the United States as it did in Europe’s fertile ground in the 1930s, but the ascendance of President Donald Trump and the early actions of his administration may move the United States in an authoritarian direction, a panel of historians told a Harvard audience Tuesday.

During a forum at the Minda de Gunzburg Center for European Studies, the speakers dismissed direct comparisons between the fascist ideology that once swept parts of Europe, a movement that they called specific to that era. But they said the U.S. administration’s attacks on traditional institutions, targeting of Muslims from some countries, and other actions are unsettling signs.

Charles Maier, the Leverett Saltonstall Professor of History, said that fascist leaders “arrived in power in Europe based on paramilitary models and with militias.” He said that type of movement is not present today.

“Nonetheless, a lot of bad things can happen without attributing them to this historical model of fascism. We can say ‘plain vanilla’ authoritarianism, the psychopathology of the narcissistic leader, the need to bully, the willful disregard for truth,” Maier said. He said that in the United States and some other countries, “We have arrived, I think, at a new era of self-infatuated bullies.”

The forum, organized by the center and chaired by Maya Jasanoff, the Coolidge Professor of History, offered a European historical perspective on current American politics, and in particular the question of whether fascism could take hold here. The title, “What Can’t Happen Here,” was drawn from Sinclair Lewis’ 1935 political novel, “It Can’t Happen Here.”

Penslar, focusing on anti-Semitism, said that “the ‘Jewish question,’ as it was known for a century, has not roared back in the form of Trumpism.” But he worried that the administration “is creating chaos and catalyzing violence that will lead Americans to accept and even long for authoritarian rule,” with the hostility this time directed not at Jews but at Muslims and Hispanics.

Maier said he worried that even if the United States does not impose repression “from the top down … it generates repression on a decentralized basis, like a wet sponge that, when squeezed, oozes its water from every cavity.”

Peter E. Gordon, the Amabel B. James Professor of History, said that despite the nation’s claims of exceptionalism, “U.S. history has its own exceptionally violent patterns of racism, domination, and exclusion.”

While agreeing that there is no direct ideological comparison, Gordon said there are similarities in the Trump movement to fascism, citing “enhanced xenophobia … strong antipathy to immigrants, a refortified racism and misogyny, a general tone of white nationalist pride,” the assault on the media, “mobilizing antipathy in crowds,” and using “quasi-mythical language.”

“I believe that American culture today is especially vulnerable to this style of demagoguery because of the rise of new media and the decay of the traditional public sphere,” Gordon said. Still, he voiced hope that the conventional Republicans who were largely responsible for bringing Trump to power will resist “anti-systemic” practices.

Sounding less optimistic, Mary D. Lewis, the Robert Walton Goelet Professor of French History, said, “We ignore at our peril the extent to which this style of politics has been institutionalized in the United States for a very long time.” Lewis said she thought the Trump movement is in part “a reaction against the gains of the Civil Rights Movement of the 1960s.”

“There are all kinds of different ways we can analyze whether Trumpism is fascism, but to me the more worrying thing is the way in which fascism or … some of the extreme ideas are getting absorbed into mainstream politics,” she said.

Terry Martin, the George F. Baker III Professor of Russian Studies, said there are striking differences between Trump and Russia’s authoritarian President Vladimir Putin, including that Putin believes in a “strong state” while Trump “opposes himself to the existing state.”

He said several factors are attracting Trump and his supporters to Putin, including the Russian leader’s embrace of foreign policy realism, his contempt for “politically correct rhetoric and hypocritical liberal cant,” and his displays of virility.

David Armitage, the Lloyd C. Blankfein Professor of History, addressed fears that the United States may even eventually head toward civil strife if internal divisions worsen.

“There are no armed groups currently raising their flags; troops are not massing for coming conflict on American soil,” he said. But Armitage warned that “the violence of language and the physical violence that has defined Trumpism from the very beginning” of his campaign “has only become more alarming now.”

Armitage said that to keep the ideals that define the nation vibrant, it would benefit from “everyday acts of resistance within government, nonviolent protests outside it, and self-organization around the country against ethno-nationalism, kleptocracy, and authoritarianism.”