Hands of a healer, heart of a Syrian 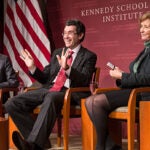 The problem with U.S. secrets

Sometimes he goes by John White. Sometimes he’s Abdulaziz Adel. At Harvard he is Mahmoud Hariri. His many names are a product of his life in Syria, where being a doctor treating the wounded is often as dangerous as being a rebel fighting the regime of Bashar al-Assad.

There have been 400 documented attacks on medical facilities since the Syrian war began in 2011 and close to 800 medical workers killed, according to figures from the U.S.-based nongovernmental organization Physicians for Human Rights. The assaults have been executed almost entirely by the Assad government or its allies, according to the NGO, and have targeted civilians with ruthless precision.

Hariri, a surgeon and currently a Harvard Scholars at Risk fellow, has witnessed firsthand those brutal campaigns and their horrific aftermath: bodies marred by barrel bombs (cylinders crammed with explosives and shrapnel); burned remains of medical students kidnapped and murdered for the crime of trying to aid the injured; a woman, nine months pregnant, who lost her baby when a sniper’s bullet pierced its skull.

Tragedy dominated Hariri’s daily reality the past several years in Aleppo, the city where he was born and first devoted his life to helping others.

“Medicine was my ambition since I was a child,” the 50-year-old physician said on a recent afternoon in his Harvard office on Story Street, thousands of miles removed from the devastation of his home city, where hundreds of thousands have died since fighting broke out in 2011. “They used to call me, since I was in the middle school, ‘How are you, doctor? Where are you going, doctor?’”

When it was time to pick a specialty, Hariri opted for general surgery because of its “practical chance to save lives.” He didn’t imagine that his days removing gallbladders, fixing hernias, and teaching at Aleppo University would help prepare him to be a trauma surgeon saving lives on the front lines. He was wrong.

The father of four turns to his computer to pull up a video of a group of medical personnel working feverishly in an improvised Aleppo operating room. “That’s me,” he says, pointing to blue rubber-gloved hands holding a beating heart spurting blood from a hole torn open by shrapnel. (The patient survived.)

After shadowing and assisting David Nott, a London specialist and war surgeon who visited Aleppo in 2013 for six weeks, Hariri was on his own. Soon he was performing complex surgeries — vascular, lung, and open-heart — with lives in the balance.

At Harvard, he is helping others gain the experience they need to become doctors in his war-ravaged country, where skilled medical professionals are increasingly rare. Hariri, who is being hosted by the Harvard Humanitarian Initiative and the Harvard T.H. Chan School of Public Health’s Department of Global Health and Population, is focused on developing the medical school arm of the new Free Aleppo University.

He is also working on building a network of doctors, medical educators, and experts who can continue to train young doctors in Syria whose postgraduate work was interrupted by civil war. Hariri and his Syrian team are connecting via the web specialists from the United States, the United Kingdom, and Saudi Arabia with Syrian students for interviews, oral exams, and online tests.

In Aleppo, Hariri helped coordinate an underground network of physicians and makeshift hospitals, safe houses filled with supplies where doctors can perform emergency surgeries. To avoid being targeted by bombs they removed sirens and lights from their ambulances and camouflaged the trucks’ bright yellow paint with mud. They trained themselves to do everything, from patient record-keeping to preparing for and responding to chemical attacks.

“Step by step we learned how to organize the work.”

Harari is convinced that education is the light that will show his country the way out of conflict.

“Fighting extremism starts from education,” he said, “not from the fight. I believe that education, education is the key for freedom, self-dignity, development, and getting rid of all extremism. For that reason I am working on this with my friends.”

In 2014, his friends in the Syrian medical community promised to nominate him for the Harvard fellowship if the surgeon promised them something as well: he would return. Hariri chuckled as he recalled the agreement. Going back, he said, has never been in question. His response to those who ask him about seeking asylum in the United States is always the same.

“I need to go back home,” he tells them. “I believe that my home needs me. I have to work for them.”

In the spring, after his fellowship ends, Hariri will stay true to his promise, heading first to Turkey, where he will leave his family, and then back to Syria to continue his work.

“I know that the future looks grim … I don’t expect that something good will be happening soon. But in spite of this, we do believe that we have to do our best.”