Sizing up Gorsuch on style, substance 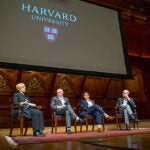 Law School grad would alter the tone, if not the balance, of court, scholars say

Much of the response to President Donald Trump’s nomination of Judge Neil M. Gorsuch for the Supreme Court has centered on the 1991 Harvard Law School grad’s similarity to the justice he would replace, Antonin Scalia, who died last year. But the two diverge in at least one important respect, says Charles Fried, the Beneficial Professor of Law.

“You won’t get any of the personalized attacks that Scalia was famous for,” said Fried. “He [Gorsuch] is not sarcastic and he is certainly not further to the right than Scalia was … his manner is much less aggressive and much more respectful of the people he disagrees with.”

Still, Gorsuch would bring to his rulings many of the same ideas that guided Scalia, Fried said.

Gorsuch, 49, is a highly respected jurist with sterling legal and academic qualifications. A classmate of Barack Obama at HLS, he was a Marshall Scholar at the University of Oxford and served as a clerk for Supreme Court Justices Byron White and Anthony Kennedy. He worked in a Washington law firm for a decade. In 2006, President George W. Bush appointed him to the U.S. Court of Appeals for the 10th Circuit in Denver.

Jane Nitze, J.D.’08, Climenko Fellow and Lecturer on Law at HLS, clerked for Gorsuch from 2008 to 2009, getting to know both his judicial philosophy and his character.

“What struck me was his real, genuine reverence for the Constitution and the rule of law that came through on a daily basis,” said Nitze. “As a judge, he believes that cases should be decided on the basis of the law and not on the basis of policy or personal preferences. His judicial record shows he applies the law impartially.”

As for Gorsuch’s personal qualities, Nitze said he always treated colleagues, litigants, and clerks with respect, and would often share his passion for the outdoors with clerks by inviting them on hiking and skiing trips outside Denver.

“He’s really a kind, genuine and decent man,” she said. “He’s a great boss and a great mentor for all clerks, including myself. Any clerk you speak to, would just speak glowingly and lovingly of him.”

For Richard Lazarus, Howard and Katherine Aibel Professor of Law, Gorsuch was “the single most qualified person” on Trump’s list of 21 potential nominees, a judge “who is smart and has integrity.”

“This is a man of enormous achievements,” said Lazarus.

“Gorsuch is as smart as he is conservative, and he writes elegantly,” said Tribe. “He’s a brilliant, terrific guy who would do the court’s work with distinction.”

Said Goldsmith, “He’s immensely qualified for the Supreme Court — an outstanding lawyer, and judge, and person.”

As noted by Fried and others, the appointment of Gorsuch would likely return the court to the same ideological balance that existed before Scalia’s death. Of the eight sitting justices, Elena Kagan, Sonia Sotomayor, Ruth Bader Ginsburg, and Stephen Breyer are on the liberal side, while Chief Justice John Roberts, Samuel Alito, and Clarence Thomas are more conservative. Kennedy, a moderate conservative, has occasionally sided with the liberal justices on social issues and is considered the swing vote on a full court.

If Judge Merrick Garland, Obama’s nominee to fill the Scalia seat, had not been blocked by Republicans, the court would have changed dramatically, said Lazarus.

“With Garland on the court, there would have been potentially five justices more liberal and progressive for the first time in 60 years,” he said. “With Gorsuch on the court, it’s more like what the court has been for the past 25, 30 years, which is a court more on the middle but one that tends to be more conservative than not. It’s more of the same.”

Senate Republicans blocked Garland’s nomination for the last 10 months of Obama’s presidency. Some Democrats, still angry about the treatment of Garland, have said they will oppose the Gorsuch nomination. It won’t be an easy battle, said Lazarus.

“Gorsuch on the merits would be harder to resist,” said Lazarus. “But regardless of Gorsuch per se, there will be significant resistance just because of the anger and frustration with Garland’s treatment.”

Democrats have no choice but to confirm Gorsuch, the best candidate under the circumstances, said Fried.

“There may be a little bit of political back and forth, but it will go through,” he said. “The Democrats have to let somebody go through. And there is not going to be anybody more acceptable than him.”