Focus on the future of food 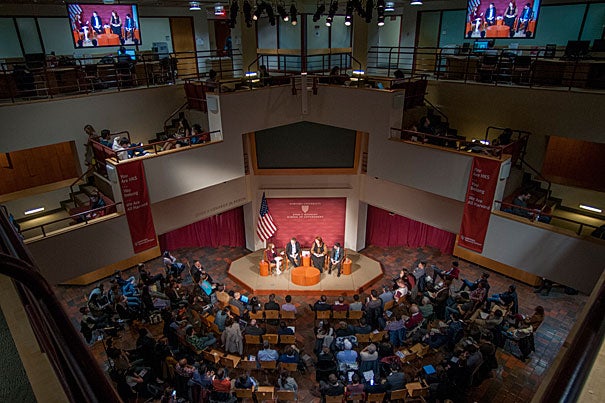 Capsule discussions examine key areas, concerns over how to feed the world

The concept behind the Weatherhead Center for International Affair’s Global Food+ 2017 summit was simple: expand knowledge and the discussion about the planet’s rapidly changing food supply chain. In 24, seven-minute speed-talks, scholars and researchers in the fields of health, food, and environmental science focused on the challenges of feeding the global population.

More than 200 students, faculty, and community members attended the summit Friday in the Tsai Auditorium at the Harvard University Center for Government and International Studies. The event was also streamed live on Facebook.

“Global food matters, and we’re here to celebrate the phenomenal amount of research going on in the greater Boston area in almost every imaginable discipline,” said event co-organizer Willam C. Clark, the Harvey Brooks Professor of International Science, Public Policy, and Human Development at Harvard Kennedy School. “We are getting a taste of what some of our colleagues are up to, and taking what we’re doing here and connecting it with action around the world.” 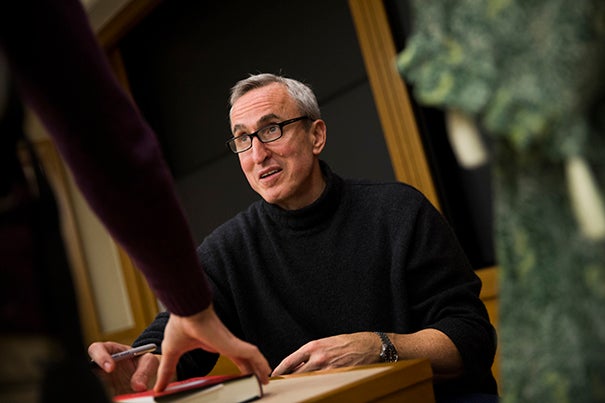 The keynote address was given by Shenggen Fan, director general of the International Food Policy Research Institute. He spoke about identifying ways the agri-food industry can reshape its systems to improve global nutrition by working together.

“For the past several decades, the world has made tremendous progress in reducing hunger and undernutrition. However, challenges remain grave,” Fan said. “Researchers from a broad range of disciplines in the Boston area are helping to build the evidence base, train students from around the world, and share knowledge to help reshape the food system.”

In the first talk, Elizabeth M. Wolkovich, assistant professor of organismic and evolutionary biology and a Faculty Fellow of the Arnold Arboretum, discussed a likely future decline in crops in the world’s wine-growing regions due to climate change, and how shifts in viticultural practices might aid in adaptation.

Assessing the net risks and net benefits of food is vital, explained Elsie Sunderland, the Thomas D. Cabot Associate Professor of Environmental Science and Engineering at Harvard. Her presentation, “Impacts of Environmental Change on Contaminants in Seafood,” focused on the intersection of toxicology and nutrition. Sunderland described how chemical compounds and climate change can alter marine ecosystems, and the need to support policy initiative on a global scale.

Nina Gheihman, a Ph.D. candidate in sociology at Harvard’s Graduate School of Arts and Sciences (GSAS), talked about the shift in societal views of veganism over the past several decades. Her presentation, “Innovation as Activism: The Case of Veganism in the United States, France, and Israel,” invited people to ask questions about their ties to the social norms of their food choices.

“I think it’s important to be skeptical of anything, including veganism. It makes sense for myself in regard to animals and the planet, but the onus is on people to do the research for themselves,” she said. “I understand when people say if my actions can reduce suffering in some way, then that’s good. But like with any cultural practice, you can’t just assume it blindly.”

“It’s a good way to share the intellectual enterprise of discovery from a wide variety of disciplines in a way that a non-specialist audience can appreciate it,” said Robert Paarlberg, an adjunct professor of public policy at the Harvard Kennedy School and a co-organizer of the event, who gave a talk titled “Why We Grow GMOs for Animals But Not People.”

This was the Weatherhead Center’s second time bringing people together on the topic. The forum in 2015 showcased the research of Harvard faculty in food and agriculture, but this year included other Boston-area institutions.

“It’s really different this year. We wanted to expand the scope, especially for students at all the other universities, to give them a view of what roles non-land-grant colleges play on global food issues,” said Jess Newman ’17, an M.P.A. candidate at the Kennedy School and an M.B.A. candidate at MIT, who was student organizer of the event.

Marena Lin ’11, a Ph.D. candidate in Earth and planetary sciences at GSAS, said it is important to have diverse voices on such a vital topic.

“It’s incredibly important to hear what people are working on, which is fodder for future collaboration,” she said. “Everyone can get something different out of it, see different perspectives, and have different lenses on the same problem.”

Clark said in the end there is only one world food system, and the event stirred the pot for researchers, students, administrators, business people, and the public to talk with each other.

“It is by far the most incredible food event I have ever been to,” he said. “And I’m not even a foodie.”

Harvard University Center for the Environment, which partnered with the Weatherhead Center on Global Food+, is presenting a series titled “Future of Food: Crops, Climate, and Consequences” through May. The next lecture is April 23 and features David Lobell of Stanford University.