Sugar was in the dock at Harvard Law School this week, accused of a prime role in the twin epidemics of obesity and diabetes sweeping the country.

Science journalist and author Gary Taubes ’77 made his case that sugar consumption — which has risen dramatically over the last century — drives metabolic dysfunction that makes people sick. The hourlong talk was sponsored by the Food Law and Policy Clinic and drawn from Taubes’ new book, “The Case Against Sugar.”

A reputation for “empty calories” — devoid of vitamins and nutrients but otherwise no different from other foods containing an equal number of calories — has allowed sugar to maintain a prominent place in the U.S. diet. Taubes is dubious. First, all calories are not equal because the body metabolizes different foods in different ways. More specifically, there may be something about eating too much sugar — in particular fructose, which is metabolized in the liver — that implicates it in metabolic disease.

“I’m making an argument that sugar is uniquely toxic,” said Taubes. “It has deleterious effects on the human body that lead to obesity and diabetes.”

Taubes laid out a case that he admitted was “largely circumstantial,” though one he considers compelling enough that it would gain at least an indictment from an impartial jury. The problem with the evidence, he said, is that public health researchers haven’t focused enough attention on sugar.

“The research doesn’t exist beyond reasonable doubt that sugar is to blame,” Taubes said.

Diabetes, Taubes noted, was once a rare disease. He traced its rise through the 1800s and 1900s from just a fraction of 1 percent of the cases seen at Massachusetts General Hospital to a condition that afflicts nearly 10 percent of the U.S. population, according to the Centers for Disease Control and Prevention. That increase, he said, coincides with an increase in sugar in the American diet.

He tied today’s problems to both the sugar industry and some of the scientists responsible for informing the public about diet. Two researchers prominent in Harvard’s history didn’t escape blame: Elliott Joslin, the founder of the Harvard-affiliated Joslin Diabetes Center, and Frederick Stare, the founder of the Harvard T.H. Chan School of Public Health’s Nutrition Department. 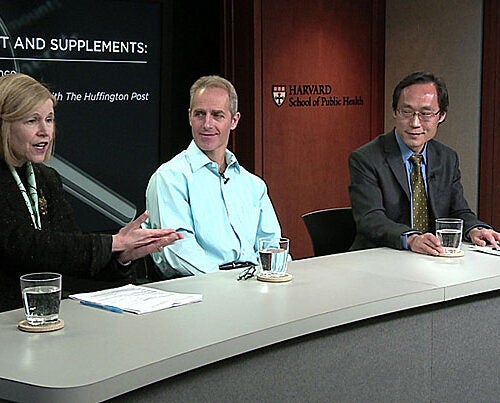 Joslin, Taubes said, didn’t believe sugar itself was harmful and in fact thought it was beneficial in balancing diabetic reactions stemming from too much insulin. Stare, whose work included research funded by the sugar industry, believed that too much fat, not sugar, was the harmful factor in the diet, a view that helped shape the low-fat recommendations of the 1980s and 1990s that are widely viewed as a significant factor in the obesity epidemic.

The magnitude and impact of diabetes in the U.S. can’t be overstated, Taubes said. From 1958 to 2014 there was a 750 percent increase in the prevalence of diabetes in the population, and a 1,400 percent increase in the number of cases. He cited the World Health Organization’s director general, Margaret Chan, who last year said there is “virtually zero” chance that public health specialists can prevent the “slow-motion disaster” of diabetes from getting even worse.

With that grim prognosis, Taubes said it is “incomprehensible” that scientists are not intensely searching for factors that might have been overlooked. The reason for that lack of effort, he said, is that we think we already know the cause — overeating, a lack of exercise, and the food industry’s dogged efforts to make their products irresistibly appealing.

Though sugar has long been a suspect in illness, its role has been obscured by both the focus on fat and an over-complication of the dietary landscape, said Taubes, citing National Institutes of Health-funded obesity studies that look at everything from a lack of sidewalks and playgrounds that deter exercise to advertising, lack of sleep, and emotional issues such as boredom, stress, and anger.

Science tells us to start not with a complicated web of explanations, Taubes said, but rather with the simplest hypothesis that adequately explains the facts.

Some blame lies with the Food and Drug Administration, said Taubes, pointing to a 1986 FDA study that found “no conclusive evidence” that sugar was harmful when consumed at typical levels of the time. Taubes said he actually agreed with that conclusion, but only because the sugar levels the report cited — 40 pounds per person annually — were badly out of date and reflected levels that might have existed in 1840.

The actual per capita consumption at the time, according to the Department of Agriculture, was 75 pounds a year — though sugar industry production created enough for 124 pounds per person a year, and Taubes said that may have been the true consumption figure. Today, those USDA numbers are about 90 pounds per person annually, with a sugar industry production equal to 131 pounds.