Drawing wisdom from the young 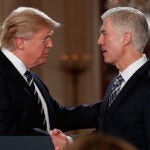 Sizing up Gorsuch on style, substance

Politically engaged young people have a historic opportunity to help heal the deep national rifts exposed during the presidential campaign, two prominent speakers told student leaders from campuses across the country at a Harvard forum Saturday.

Doris Kearns Goodwin, the veteran presidential historian and commentator, said the current generation has come along “at a time when divisiveness in our country is as great as certainly it’s ever been in my lifetime.”

“If this is your rendezvous with destiny to figure out how to better heal some of those wounds and get politics into a place where people can work together again, then it’s great to have that challenge for you,” Goodwin told the assembled students at the Harvard Kennedy School’s Institute of Politics.

The panel discussion featuring Goodwin and veteran political analyst David Gergen was among the highlights of the Institute of Politics’ 2017 National Campaign for Political and Civic Engagement conference. Seventy student representatives from 28 campuses took part in the three-day event, which this year focused on how to reconnect the nation’s factions.

“There is a real spike now in interest in your generation about what can we do to help … how do we make a difference. I think this is a moment to be asking that question, and this is the opportunity to get engaged,” said Gergen, a professor of public service and co-director of the Kennedy School’s Center for Public Leadership. Gergen advised four U.S. presidents.

Joe Goodwin ’01, J.D. ’13, the director of the conference, said the election revealed the deep divides in the nation. “We are saying to the kids: ‘We understand the problem, but instead of hand-wringing, let’s roll up our sleeves and find a way’” to reconnect people, said Goodwin, a son of Doris Kearns Goodwin.

He said an aim of the conference, which also included a student town hall, break-out sessions, and a keynote address by U.S. Rep. Joe Kennedy, was for students to devise strategies they can pursue on their own campuses with help from the Institute of Politics.

Nivedita Khandkar ’19, student chair of the conference organizing committee, said she was impressed at “how respectful the discussion was … It’s kind of a model for how I think society should look.” Khandkar said she hoped her fellow students “will leave with a sense of hope rather than the sense of fear and worry that I know a lot of people have.”

Jalen Jennings, a junior from Tennessee State University, said he enjoyed meeting students from across the country and hearing their thoughts. “We all have different views, [but] you come together and you find that in some ways we have the same ideas in some areas,” he said. Jennings, who took part in a breakout group that focused on social media, added, “We are trying to come up with different ideas to make sure news gets published to social media sites that is more credible,” a subject he plans to pursue on his own campus.

Shae Omonijo, a junior from the University of Chicago, said a major issue discussed at the conference was that “students really don’t know how to run for a local position,” or even how to become involved in “simple campus engagement like student government.” She hopes to create a document guiding students on her campus on running for office.

Natalie Hagy, a junior from Ohio State University, said that as a political moderate in America today, “I feel right now like I’m watching a food fight. I’m just kind of between both sides … I think this conference has kind of energized me a little bit in that aspect” by spurring participants to seek common ground on core issues.

At the forum, Gergen said he understood the direction of President Trump’s early tenure, but that it can lead to other problems.

“It’s natural he wants to keep the coalition behind him,” he said. “But increasingly his problem is that he is playing so exclusively to his base that it’s scaring a lot of other Americans, causing enormous distress. And very importantly, it is really, really alienating a lot of our friends and allies around the world at an extraordinarily fast pace.”

Gergen and Goodwin cited instances when the nation has faced similar divisions, though episodes that had starkly different outcomes. The fight over extending slavery, for example, led to war. But in other periods, notably the Civil Rights Movement, a fiercely divided nation ultimately came together, Gergen said.

Both speakers noted the importance of having unifying leaders as a key to bridging the political divides. They said young people have a vital role to play, including in the current climate.

Gergen, who served in the White House when President Richard Nixon was embroiled in the Watergate scandal, observed, “I’m more worried today about the future of this country than I was in Watergate. This is serious stuff, and we really need you to be engaged.”