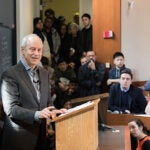 To understand Trump, learn from his voters

With the Republican Party controlling the U.S. House, the Senate, and the White House, one might consider this the best of times for the conservative movement. Yet the consensus at Wednesday night’s Kennedy School forum “The Future of the Conservative Agenda” was often just the opposite.

Moderated by Kristen Soltis Anderson, co-founder of Echelon Insights and a former Institute of Politics resident fellow, the panel asked how the traditional conservative agenda — health care reform, free trade, tax reform, a strong military — is likely to fare under President Trump. And the panelists not only expressed doubt on developments in those areas, but suggested there will be problems ahead.

“Trump is not a conservative at all,” said April Ponnuru, senior adviser of the Conservative Reform Network and a former adviser to Jeb Bush’s presidential campaign. “The things we care most about, including social issues and the free market, are things that he barely tolerates. So we now have an agenda that doesn’t address the concerns of most Americans. College is still far too expensive, for example. He wants to do some big things — health care, tax reform, and building a wall — and those will all cost a lot of money. The one thing he’s been effective at doing is channeling peoples’ frustration. Congress could turn that into real policy, but frankly they haven’t done a great job so far.”

The panelists named the Affordable Care Act reform as one case where conservative plans already seem to have dead-ended. As Oren Cass, a Manhattan Institute senior fellow and former Mitt Romney campaign adviser, noted, even President Barack Obama took a year to pass a health plan with the full support of his party.

“He came in with a hyper-competent administration, and it took him that long to pass something that was a mess of a health care plan,” said Cass. “And now the idea that Republicans, without that kind of leadership, are going to get something passed in a couple of months … Well, that is certainly optimistic.”

Tax reform, the panelists agreed, is looking like a long shot as well. “That’s frankly becoming as much of a mess as health care reform,” said James Pethokoukis, a columnist and blogger at the American Enterprise Institute. The Trump campaign “hinged a lot of their pro-growth agenda on tax reform. So not only do they need to pass it, but it has to have amazing results on the economy. If that doesn’t get done, this administration will be a complete and utter failure. But Trump has set the expectations so high for what he can do right now, and a lot of voters may be very disappointed. We may not get super-fast growth, and the way it gets distributed may not be much different than it has been in the past 10 years.”

Pethokoukis was even less favorable on trade issues. “That will be another in the series of catastrophic repeats. If there is one thing consistent in Donald Trump, he thinks that America’s one economic problem is that we’ve been screwed by other countries on trade,” said Pethokoukis. “To him, that explains it all, and that will be the heart of his trade policy. So now [Trump trade adviser] Peter Navarro wants to cut all the global supply chains — the ones that have been sending us jets and iPhones.”

Nor did the panelists find much relief in Anderson’s suggestion that a stronger border at least coincides with conservative goals. Ponnuru said that while Trump may build a wall with Mexico, he can’t make it economically feasible. “The numbers just don’t work. I expect that he will get a lot of the wall built, but it will crowd out a lot of other things,” he said.

Pethokoukis added that the wall also could send the wrong message to the international business community. “There have always been people around the world who think that if they’re going to do something amazing, they want to do it in the United States,” he said. “But now if you’re a great foreign entrepreneur, you might think, ‘Forget it. That’s not the country that I thought it was. Maybe I’d rather stay in my home country.’”