Bogie, Bergman, and the Brattle 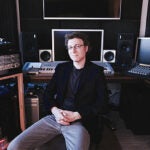 At 75, ‘Casablanca’ still has a special place in the heart of Harvard Square

In November 1942, a timeless story of love, loss, and redemption first appeared on the silver screen. Along with the hearts of audiences, “Casablanca” won Academy Awards for best picture, best director, and best screenplay.

Seventy-five years later, the film is no less moving for viewers young and old. Its lasting power, according to a number of Harvard scholars, is due to a range of factors, including wartime significance, an outstanding cast, screenwriting that produced some of the most quoted lines of all time, a memorable score, and an antihero perfectly suited to his era.

For Robb Moss, “Casablanca” was “a seminal film for me when I was falling in love with films in college.” Today, as chair of Harvard’s Department of Visual and Environmental Studies (VES), Moss often references the movie in class, in particular “the geometry of the last scene,” in which the three main characters, Humphrey Bogart as expatriate Rick Blaine, Ingrid Bergman as his former lover Ilsa Lund, and Paul Henreid as Ilsa’s husband, the fugitive Czech Resistance leader, Victor Laszlo, have a fateful meeting on a foggy tarmac.

“It’s the tension and dynamism within the triangular relationship,” said Moss. “The way the sound overlaps, the cuts to someone not speaking, the hats, and the looks between characters.

“Then of course, there’s Ingrid Bergman,” he added. “Her mesmerizing beauty, and that searching look she gives Bogart during the film.”

As it did for Moss, the film struck a chord around Harvard’s campus in the 1960s, thanks in large part to the Brattle Theatre.

The then-owners of the historic Cambridge movie house “clearly loved Humphrey Bogart,” said the Brattle’s longtime creative director, Ned Hinkle, and “Casablanca” had become a theater staple in the 1950s. But the film, and the actor’s reputation, really hit their Harvard stride in the early ’60s, when the Brattle launched a regular Bogart films series during reading week before spring exams.

“Casablanca” became the series’ most recognized film, and in an age before VCRs, iTunes, and Amazon Prime, students who should have been hitting the books hit the Brattle instead, lining up around the block for a chance to see Bogie on the big screen. Fans came dressed in costume and repeated the movie’s lines; they smuggled in champagne and delivered marriage proposals; they stood and sang along to “La Marseillaise.”

But it wasn’t just the role of a lifetime that elevated Bogart to legend, Hinkle pointed out. It was also the times.

“I think that Bogart, a tough guy with a heart of gold, an antihero, not your classically good-looking guy but clearly magnetic, all of these things sort of pointed him in the direction of being a hipster … the beatniks and the hippies and the counterculture groups at the time were the original hipsters in a way. He was part of that. He just somehow struck a chord and people just kept coming out.”

Today the Brattle shows the film a couple of times a year — always on Valentine’s Day to a sellout crowd. Proposals and first dates are still common. Though Hinkle admits “The Maltese Falcon,” is his favorite Bogart film, he acknowledges the brilliance of “Casablanca” and of the Bogart-Bergman pairing. “They are not going to lose their luster,” he said, “even after 75 years.”

There are other Harvard Square ripples. The Brattle connection inspired the creation of the beloved restaurant of the same name. When the adjoining Casablanca closed in 2012, the theater acquired the restaurant’s mural of the movie’s cast to hang in its auditorium. Further back in time, the long-gone Harvard Square restaurant The Blue Parrot took its name from a club in the film run by Ferrari, portrayed by the inimitable Sydney Greenstreet.

And of course there are those memorable lines. Mark Poirier, who teaches a dramatic screenwriting workshop as the Briggs-Copeland Lecturer on English, said the script’s many authors added to its appeal. Based on a never-produced play by Murray Burnett and Joan Alison, the screenplay went through various iterations and countless last-minute changes.

The brothers Julius and Philip Epstein are often credited with much of the film’s comic and clever dialogue. Howard Koch is said to have lent the script more gravitas, while Casey Robinson was hired to help flesh out the love story. Friction was unavoidable, but the end result, said Poirier, makes “for interesting class discussion in a room full of aspiring screenwriters.”

David Pendleton, programmer at the Harvard Film Archive, said the movie gets a lot “more love than respect.”

The director, Michael Curtiz, isn’t considered an auteur with a signature style such as Alfred Hitchcock or John Ford, said Pendleton. Instead, the film stands as an example of the genius of the Hollywood studio system. “In other words, what makes the film so special is the coming together of a lot of talented people who were all working at their best.” (A notable footnote: Refugees who had fled Nazi rule in Europe were a key part of that talented group.)

The story of sacrifice in the narrative arc, echoed in the film’s cinematography, also touches a collective nerve, Pendleton said.

“[It’s] the notion that you are not going to stay with the person you really love for the good of a family, or in this case, the world.”

Similarly, he said, the hint of expressionism captured in the film’s use of light, dark, and shadow “brings together the personal and the historical; this idea that the individual fates of Ilsa, Rick, and Victor Laszlo are not just theirs, but they are somehow projected onto the world.”

Former VES Professor J.D. Connor, now at the University of Southern California’s School of Cinematic Arts, credits some of the film’s popularity to its impeccable timing. It premiered in U.S. theaters just days after American and British forces had invaded Morocco and captured Casablanca, making the otherwise obscure city the center of international attention.

“The first thing it had going for it was that its release coincided with the real first successful sets of campaigns in North Africa,” said Connor. “So ‘Casablanca’ wasn’t some tiny out-of-the-way city; it was right in the news as that was happening.”

Other factors helped drive its success, including its warm reception in France and at home. Warner Bros. quickly capitalized on the success of “Casablanca” and the American public’s desire for similar material, turning out other wartime films with Bogart regularly cast as a morally ambiguous tough guy who always does right in the end.

“One of the reasons that ‘Casablanca’ lasts is that it’s the first in a whole series of movies that are along that same line for [the studio], and it really codifies what the Bogart star persona is going to be,” said Connor.