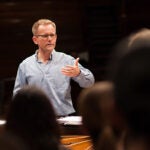 His paintings of national icons such as Paul Revere, John Hancock, and Samuel Adams cemented Boston-born artist John Singleton Copley’s connection to the American Revolution, and to the country’s cultural pride. “Today, in museums across America, Copley’s brilliant portraits evoke patriotic fervor and rebellious optimism,” writes Jane Kamensky in her new book, “A Revolution in Color: The World of John Singleton Copley.”

But that connection was more complicated than it might now appear. In the spring of 1774 Copley sailed from Boston to London, never to return. When the fighting began, he followed it from an ocean away.

Kamensky, a Harvard historian and Carl and Lily Pforzheimer Foundation Director of Radcliffe’s Schlesinger Library on the History of Women in America, notes in her book that Copley did not share the politics of his sitters and that his detachment from the conflict mirrored the divided sentiment among many in his homeland. “Like the paintings Copley produced so painstakingly,” she writes, “the revolutionary world was awash in an almost infinite spectrum of color. Allegiance came in many shades.”

Kamensky spoke with the Gazette about the book and about the symbolism and significance behind some of Copley’s best-known works.

GAZETTE: What surprised you in this research?

KAMENSKY: What surprised me was the tension between the way that we know Copley and use him in the United States, and the way he understood his own life and work. We ask Copley’s paintings to illustrate, and for his sitters to embody, an understanding of Americanness that cuts against the grain of his America and the way he understood himself. His ironic distance from the patriots’ project opens up a much wider, and I think a more important question about the unaligned in the era of the American Revolution. We imagine it as a moment of the zealous choosing of sides — preferably the “right” side, our side. But Copley’s muddled detachment from that moment was pervasive. The best estimate is that anywhere from a third to three-fifths of the American people were these protean creatures of shifting alliance who did not particularly want the Revolution — or at least the fighting — to come to their state any time soon. If the balance of power shifted on the ground in their locality, they shifted with it. It gives us a very different view of the founding to have people like Copley at center stage. He is both unique — nobody else painted the way he did within 3,000 miles of Boston in the period that he was here — and like almost everybody. That combination made him larger than I realized.

GAZETTE: One of his most well-known pieces is the portrait of Paul Revere that hangs in the Museum of Fine Arts in Boston. To many it’s the iconic image of the American patriot, but you caution people not to conflate the sitter with the painter. Why?

KAMENSKY: “Paul Revere” is certainly the most famous of Copley’s works, and probably the second-most famous face in Revolutionary America, a later version of George Washington being the first. Revere does a lot of work as an American character: He’s the guy who rolls up his sleeves and looks right at you and does nothing to disguise his artisanal work as anything but the elevating craft that it is. He doesn’t wear a wig, he doesn’t button his shirt, there’s not a bit of lace or frippery about him.

By contrast, Copley’s self-portrait, done in late 1769, within roughly a year of “Revere,” could not be more different. He’s in a velvet waistcoat that’s clotted with lace, capped with a silk robe called a banyan that has a kind of oriental figure on it. His hair is meticulously powdered. There’s enough gold braid on his waistcoat for it to be almost a military uniform. He and Revere are like a peacock painting a hen. And I think that’s probably who they were in the streets of Boston, even though they were both artisans, at least until Copley married. They were both making about as much in a good year. They were both from immigrant families. But in the way that they fashioned themselves, Copley was a very different kind of guy. Everybody in the world that Copley and Revere grew up in would have called London home, with capital H. Not because they were from immigrant families but because it was the lodestar of their universe. Copley stayed that way, and Revere changed.

GAZETTE: Can you discuss some of the political and personal symbolism in what you’ve called your favorite Copley painting, “The Death of Major Peirson,” which depicts a brief battle on the Channel Island of Jersey between the English and the French?

KAMENSKY: It’s a very surprising angle on the Revolution. Nobody knows that there was fighting in the Channel Islands. The battle took place when Britain’s war was nearly lost, in 1781. The war had been lost and the peace ratified by the time the painting was exhibited, in 1784. People even in London at the time had to be reminded about where Jersey was and why it was important. “Peirson” has that frisson of “What am I looking at?” because this is an American painter and the Redcoats are the heroes. It also has these two incredibly startling passages.

One at the very center of the painting is a black servant in a military-style livery, a dark navy jacket with white silk lapels and three colors of ostrich plumes in his hat, who is heroically firing his musket to avenge the death of our hero, Major Peirson. That dashing black figure in this gorgeous costume acting violently in a way that is heroic I think is quite singular, and was quite edgy at the time. It’s Copley’s way of winking with his London audience at the hypocrisy of the United States about black liberty. In addition he’s got his wife and children off in the corner of the painting, uniting these worlds of war and family in a way that really speaks not only to his biography, but to the fact that the American Revolution/Britain’s American War was a civil war with rupture-producing consequences not just for men in arms. … It’s worth spending a long time with that picture.

GAZETTE: “Watson and the Shark,” painted in London in the late 1770s, is widely considered Copley’s other masterpiece. Can you speak a bit to its significance?

Brook Watson had been a merchant’s boy, probably a cabin boy at first and then an Atlantic coastal merchant, spending time in the waters of Havana where this happened to him in the 1740s. He was swimming and was flayed and nearly drowned. The incident allowed Copley to paint something that was incredibly suspenseful and that was exhibited at an incredible moment of national suspense about the fate of Britain.

It’s begun in 1777 exhibited in 1778, right at the moment that all of the London newspapers are talking about France entering the Revolutionary War. Spain was likely to come in next and as goes Spain so goes the fate of the English nation, because the weight of the French and Spanish navies together was almost undefeatable. So there’s a kind of hanging in the balance feeling around London, which turned out to be very fortuitous to Copley as he exhibited a painting set in Havana harbor, which England so briefly and meaningfully possessed at the end of the Seven Years’ War.

So there was a vision of a greater English nation, when Havana belonged to England, that people can see in the picture. And then just the sense of not knowing how the scene turned out. People were caught mid-gasp in the way that they were in the war and there’s a kind of chiming back and forth between being in suspended animation in that painting and where the national psyche was when he exhibited it in London.

GAZETTE: How do you think Copley would view his legacy?

KAMENSKY: Copley thought that North America would one day become a truly great and central part of Britain and he wanted to be one of the founding figures of that version of America’s reputation, so he’d be glad about that — though his America was a region, not a nation. I think the alignment with the Revolution would really surprise him and that he would find the association of his career with “Revere” to be just astonishing. I don’t know what he thought of that painting. I can’t think he would have put it in his top 250. It’s a well-finished piece. It’s highly theatrical. It’s also small and cheap and not somebody with whom he was densely associated. I think he would be amazed.

Jane Kamensky will discuss “A Revolution in Color: The World of John Singleton Copley”  on March 23 at 4:15 p.m. For more information, visit the Radcliffe website.