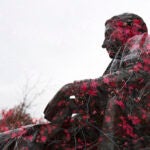 First you see, then you see again

A Harvard undergrad reflects on both leaving home, and not

I am now in my eighth year of walking through Harvard Yard every morning on my way to class. And in many ways, this walk has remained the same. I will always be overdressed or underdressed for the changeable Cambridge weather, whose whims I still cannot predict. And I will always be rushing, my sense of time forever thrown off by the five minutes tacked onto the 8 a.m. start time of high school or the seven-minute grace period I now get in college. I pass the same brick buildings and dodge the same groups of tourists while clutching the same coffee from the Starbucks by the Red Line.

When I first moved into Hollis Hall for dorm crew, carrying hastily packed belongings from my parent’s house in West Cambridge — 10 minutes away by car and 30 on foot — this impending sense of sameness had weighed me down. College had always been pitched to me as a transformative experience, where everything would be new and surprising and challenging. I had imagined that I would move at least a state away from home, to navigate the roads into New York City on move-in day, or the particularities of muggy weather in Washington, D.C., or the greener and quieter landscapes of Vermont.

This move to a new place, far enough away from my parents and high school friends and familiar sights to trigger something new in me too, was supposed to mark my first big step toward adulthood. It was in the process of moving and the experience of living somewhere else that I believed growth could happen. By comparison, staying in Cambridge seemed like a sentence to stagnation. 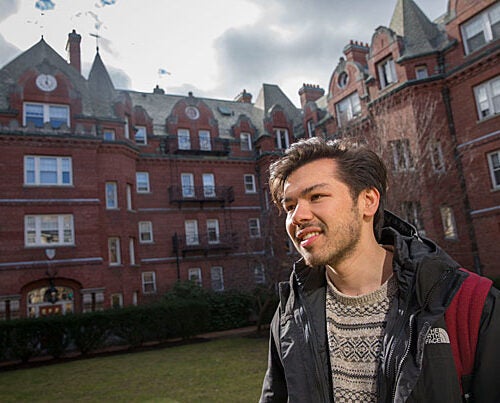 Finding comfort at home and here

The image of college as a place defined by its students’ experience of newness — surprise roommates in unknown dorm housing in an unfamiliar college town — is ingrained not just in my own imagination, but in the culture as well. This cultural imagination is predominantly an American one laced through with geography. My cousin in the Czech Republic, who grew up in Prague, did not expect a big move when he entered university two years before me. The best school for his interest in translation was Charles University, also located in Prague, and the best housing option for his student budget was his own childhood bedroom. For him, the prospect of spending his university years in the same city where he had spent his high school years did not entail existential angst. But the vastness and variety of the United States had been imprinted in my imagination, not his, and the need to explore new corners of this place was one I couldn’t shake no matter how happy he seemed to be at home.

I entered the Yard that first day through Johnston Gate with a single heavy backpack in tow and a friend along to say goodbye. In those first few familiar steps, there was no trace of the trepidation I had wanted to feel on my first day at college. My parents hadn’t come to see me off, being at work and having no doubt they would see me again within a few days — or whenever they wanted, for the next four years. But after my friend turned to walk back through the gate and I turned toward the enthusiastic upperclassmen beaming at me from behind a makeshift “Welcome to Dorm Crew!” sign, this sense of comfort suddenly disappeared. I was lost, in the same Yard where I had spent so many late afternoons lounging with friends from high school. The dorm crew captains who handed me my keys began to steer me toward Hollis with gentle smiles reserved for round-eyed, new freshmen from far away, and I didn’t stop them. I had no idea where Hollis was.

My sense of displacement in a physical space I thought I knew so well would continue for the first few months I lived at Harvard. Mostly, I felt as though someone had blindfolded me and spun me in endless circles before releasing me in the middle of Harvard Square, which now wobbled out of focus, presenting new topsy-turvy dimensions wherever I looked. Every morning that I looked out from my window in Pennypacker Hall to see the back of the Old Cambridge Baptist Church was an exercise in balancing two different worlds inside my head. This was the same church I used to pass on trips to BerryLine or walks to Central Square, part of the backdrop of high school years spent exploring Cambridge on foot with friends. Now it was on the outside, while I sat inside a dorm whose tiny triangle shower and bunked beds I had never imagined in countless strolls past this building.

Over the past four years, I have regained some sense of balance between these dimensions. The isolated, often inward-looking Harvard worlds I discovered during my freshman year feel like they have opened up to become part of the broad landscape of Cambridge as I know it. I meet friends to study in Kirkland Dining Hall or Café Gato Rojo as often as I go to the 1369 in Inman Square or Darwin’s on Mount Auburn Street.

While the brick-walled barriers between Harvard and the larger Cambridge community remain mostly intact, I appreciate the luxury of being able to move between them now. I also appreciate the insight this has afforded me — that one physical location can represent multiple different worlds offering endless new experiences. I did not get to move outward, to explore the greener pastures and larger cities outside Cambridge. But in staying here I have been able to move inward, to explore instead the corners and complexities of this place.