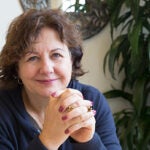 The everyday response to racism

Tommie Shelby, the Caldwell Titcomb Professor of African and African American Studies and of Philosophy, recently published “Dark Ghettos: Injustice, Dissent, and Reform,” a bold work that gives philosophical context to one of the country’s most critical social problems. In a Q&A, Shelby outlined the cultural, political, and personal history that helped shaped his book.

GAZETTE: What prompted you to write this book?

SHELBY: I’ve long been thinking about the relationship between race and class, and in the tradition of political philosophy I most identify with, one of the key problems is how economic justice and racial justice are connected. I’m also interested in the ways that racial prejudice and racial division function as obstacles to creating more just economic relations among citizens. I thought it might be fruitful to think about how these questions play out in disadvantaged black urban neighborhoods. I’ve been talking about ghetto poverty since I first came to Harvard, in 2000, and somewhere along the way — not sure when — I became convinced that philosophy could be brought to bear on the problem.

GAZETTE: What do you think philosophy can add to the study of poor urban communities?

SHELBY: From Plato to John Rawls, “What is justice?” has been a central question in philosophy. Philosophers have long tried to identify sound principles of justice. As I read the relevant social science literature, questions about justice are not usually at the center. Many social scientists are moved by concerns of justice in their choice of ghettos as a research topic, but they tend to stick to discussing empirical facts, leaving the value questions largely unexplored or implicit. I believe philosophers can deepen our understanding of the relevant values, explaining which ones are worth endorsing and why.

GAZETTE: Does philosophy also have a role to play in social policy as it relates to black urban poverty?

SHELBY: A lot of social policy discourse picks up where social scientific research leaves off. Having identified key factors in the perpetuation of ghettos — segregation, crime, or joblessness — interventions are proposed or enacted that aim to be cost-effective in solving the problem — integration initiatives, increased police presence, or jobs programs. But, again, I think important questions of political morality are often ignored. Before any such policy is proposed, it’s important to ask, “Are we facing a situation where we’re dealing with an imperfect but reasonably just social structure or are we dealing with a society that has serious injustices running through it?” When confronting structural injustice, policymakers must take due care to respect those who are unjustly disadvantaged, yet this isn’t always done.

GAZETTE: Can you give an example?

SHELBY: Some among the ghetto poor are keenly aware of the injustices they face. To maintain their self-respect, they often respond by being defiant, by transgressing certain norms, even in how they speak, dress, or style their hair. This is one way the oppressed are able to hold their heads up — to maintain a sense of dignity or to build solidarity. Unless we attend to the ethics of resistance, we may be tempted to propose solutions that give too little weight to the political agency of those we are trying to help.

GAZETTE: You argue for the need to abolish ghettos, and suggest it begin as a grass-roots effort. How can it be done?

SHELBY: What needs to occur has already begun with the Black Lives Matter movement. Activists are drawing on elements from the Civil Rights and Black Power movements, adapting these modes of political engagement to fit our current circumstances. The focus has to be on organizing and building solidarity at the local and state levels and trying to influence public debate. I don’t see myself as laying down a manifesto for what to do. I’m simply joining a conversation, which reaches back for decades, with people who are already trying to create a society of equals.

GAZETTE: How has your personal story shaped your work?

SHELBY: I grew up in Jacksonville, Florida, though I spent my teenage years in Los Angeles. I was mostly raised in ghetto neighborhoods. My mom became pregnant with me at 16 and, mostly as a single mother, cared for me and my siblings, relying on public assistance and poverty-level wages. So for obvious reasons, I’m passionate about these issues. And I’m sure my childhood experiences in poor black neighborhoods have influenced my outlook, probably in ways I don’t fully recognize.

The more abiding influence on my thinking comes from colleagues such as Orlando Patterson [John Cowles Professor of Sociology] and William Julius Wilson [Lewis P. and Linda L. Geyser University Professor]. I couldn’t have carried out this project without drawing heavily on the work of leading sociologists, as well as those working in legal studies and African-American studies.

GAZETTE: Philosophy grapples with big ideas and theories, but ghettos have such a sense of urgency surrounding them. How do you make sense of that disconnect?

SHELBY: Philosophers can say useful things about urgent questions. I think often about the thinkers I teach: Frederick Douglass, Ida B. Wells, W.E.B. Du Bois, Martin Luther King Jr. They have many profound philosophical moments in their writings, where they consider more abstract questions about justice and the political ethics of the oppressed. They took up these questions while in the midst of intense political struggles. They understood it’s not enough to know what you’re against. You also need to know what you’re for, what ideals or moral vision you’re hoping to realize. We can learn from the history of such practically engaged reflection as we grapple with the struggles of our time.