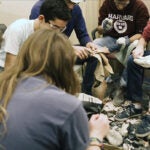 The effects of climate change may be producing a domino effect worldwide, and one area of increasing concern involves food.

Four experts gathered at the Harvard T.H. Chan School of Public Health on Tuesday for a panel concerning the impact of climate change on agriculture and the global food system, with an emphasis on the United States and Africa, and a nod toward how the incoming Trump administration might affect the issue.

Interspersed by short videos, the hourlong session focused on the effects climate change has on food security and the environment, noting the roles played by consumer demand and emerging technologies and innovation.

With the world’s population expected to pass 9 billion by 2050, the question of how to feed and nourish everyone becomes ever more urgent, the panelists said. Adamkiewicz noted that an estimated 800 million to 900 million people worldwide are undernourished, an issue that both Walsh and Juma also addressed.

“This idea of feeding the world is really a 20th-century idea,” Juma said, noting that the tendency historically has been to select for high yields of certain crops, rather than for high nutritional content. “It seems to me today that the focus is on nourishing the world.”

Noting that there has been good progress in reducing the number of undernourished people worldwide, from 19 percent to 11 percent, over the past 25 years, Walsh said that food production alone remains insufficient for achieving food security, pointing to roles played by prices, affordability, safety, distribution, and more. How food is processed, packaged, stored, traded, bought, and sold, even how it is wasted, all combine to have significant effects on food security and the environment. 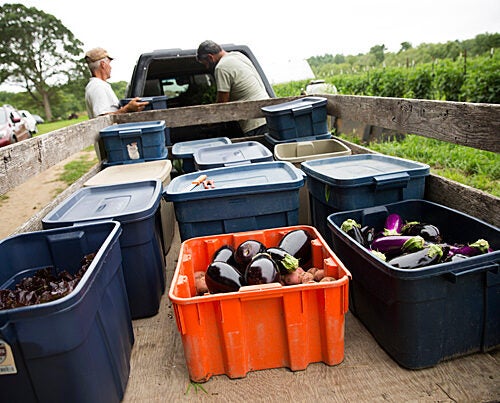 Consumer demand is also a factor, Adamkiewicz said, noting that the livestock sector accounts for 14 percent of greenhouse gas emissions. He put global food waste at 30 to 40 percent, and linked such waste with the consumption of energy and other resources. “We are also deforesting,’’ he said.

Juma, who heads a project called Agriculture Innovation in Africa, said that in developing countries the impact of climate change on agriculture “is actually understated.” He noted that studies are mainly focused on yields, rarely including decisions made by farmers confronting climate change, who may reduce their crops in arid areas or even abandon agriculture altogether. “The challenges are much more serious than we think,” he said.

Noting that just 2 percent of Americans are involved in farming, and have an average age of 58, Harper called for a “public commons” to bring the next generation of scientific tools and technologies into view on the biochemical expression in food. “We’re going to expand the definition of what farming means, and it’s going to go across all disciplines,” he said.

Referring to the work of the MIT Open Agriculture Initiative, Harper described personal food computers, boxes that create a climate inside. He described a future of meat cultivation, grown through cell cultures rather than by raising animals, and predicted a return to ancient techniques such as fermenting and brewing.

Asked to comment on the prospect of an incoming administration evidently hostile to the issue of climate change, the panelists were equable. Harper said that support for STEM (science, technology, engineering, and math) education is noncontroversial, and “squarely on the agenda of every political party.”

Juma said that some effects of climate change echo those of drought, which Africa has long dealt with. African leaders, he said, are approaching climate change as an item of housekeeping, and will explore the issue “independent of what happens at the White House.”