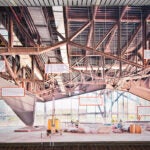 “If we are so rich, why don’t we eat better food?”

Asked by Harvard Business School Professor Gunnar Trumbull, this was one of many thought-provoking questions and intriguing concepts raised at a gathering that spotlighted the range of cross-disciplinary and collaborative food-related research being conducted across Harvard’s Schools.

The Food+ Research Symposium, which was hosted by the Weatherhead Center for International Affairs, the Harvard Kennedy School Sustainable Science Program, and the Harvard Center for the Environment, brought together 22 faculty speakers from eight Schools last Friday to deliver seven-minute presentations on the nexus of food, agriculture, environment, health, and society.

“We wanted to give people a clear idea of the breadth and depth of food research across the University, and to bring faculty and students together to cross-pollinate,” said Jessica Newman, an M.P.P. student at HKS, who organized the event with the Weatherhead Center.

Trumbull used his minutes to explain how war and women’s emancipation have historically driven the greatest innovation in food technologies. Canning, for example, was invented in France during the Napoleonic wars, and quality grades for food in the United States emerged in World War II to match the military deployments where much of the food was being sent.

Daniel Schrag, the Sturgis Hooper Professor of Geology and director of the Harvard University Center for the Environment, kicked off the symposium by asking a simple question: Is the agricultural system prepared for future challenges? He referenced his work on the President’s Council of Advisors on Science and Technology to identify emerging challenges not being addressed by traditional research enterprises. Those challenges include pests and pathogens, water use, growing food in a changing climate, global obesity, and international food security.

“Every institution that has excellent science, excellent social science, needs to be thinking about food and agriculture for the future,” Schrag said.

Samuel Myers, a senior research scientist at the Harvard T.H. Chan School of Public Health, followed Schrag by highlighting how rising concentrations of carbon dioxide and declines in global pollinators and wildlife population are affecting nutrition and health. Myers’ ongoing research has shown that high concentrations of carbon dioxide have led to a loss in nutritional values in a variety of food crops that provide humans with dietary zinc and iron, while a decline in pollinators has altered the risk of vitamin A deficiency among people in developing countries.

Elizabeth Wolkovich, assistant professor of organismic and evolutionary biology at the Arnold Arboretum, is using wine grapes to explore how wild plant species will respond to the impact of human-induced climate change. She is using the deep historical harvest records of wine grapes (starting before 1600) to understand what triggers the earlier harvests that usually lead to higher-quality wine. Her data shows that drought used to be a major trigger for those earlier harvests but no longer is, prompting her laboratory to try to understand why. A greater understanding of phenological change can then be used as an indicator for shifts in a variety of plant traits.

“Wild species tend to shift in space, and they tend shift in time,” Wolkovich said. “My goal is to better understand how they shift in time, with the ultimate goal of ‘Can we predict it?’ and ‘Is there any hope [of] mitigating those consequences’” involving climate change.

Government Professor Robert Bates spoke of how the transition to competitive political systems in Africa led to a surge in agricultural productivity because older policies that were driving down incentives for farmers no longer prevailed. Harvard Business School Professor Shawn Cole described his research exploring how mobile phones can be used to provide advice to farmers in India to improve productivity and increase yields for crops such as cotton and cumin.

Harvard School of Engineering and Applied Sciences Associate Professor Elsie Sunderland is using her research to craft advice for consumers on the presence of mercury and other bioaccumulative contaminants in seafood. These contaminants are being redistributed via the global commercial fisheries market, she said, and commercial marine food consumption has become the predominant source of mercury exposure in North America and Europe.

In particular, Sunderland is studying the public health concern that could emerge if large concentrations of contaminants from industrialization in Asia threaten the seafood stocks there — both for the communities that rely on those resources exclusively along the North Pacific and for areas, including North America, that consume the fish.

Anthropology Professor Susan Greenhalgh urged the audience to consider the human costs of America’s fight against fat. What is needed, Greenhalgh said, is a “cultural revolution aimed at uprooting fat talk, stopping fat abuse, and dethroning weight as a central value of human culture.”

Jacob Gersen, Harvard Law School (HLS) professor and director of the Harvard Food Law Lab, discussed several questions around food labeling. Are labels misleading? Are they confusing or fraudulent? Do labels affect consumer behavior? And what should the law do in this area? Gersen is collaborating with government Professor Stephen Ansolabehere to use the national survey tool that Ansolabehere manages to better understand how consumers perceive food labels. Preliminary results show that consumers mostly understood the reality behind labels. But do derived beliefs about products affect people’s willingness to buy them? Early indications suggest that the only thing that matters is the consumers’ sense about cost.

The question history Professor Joyce Chaplin posed was “How does the past taste?” Chaplin is going to teach a new Harvard class that will allow students to explore food from America’s past. In a recorded presentation, Chaplin spoke of how food is “one of our best indicators of America’s material origins,” and called it a “powerful analytic tool for culture, class, and gender.”

The conventional view that food has no place in the study of history is dissolving “faster than a cookie in milk, and it’s about time,” she said. Lack of access to or absence of food has been a critical reality of all points of our history, she continued, pointing to the case of “Jane,” a Jamestown colony resident who starved during the winter of 1609-1610 and was eaten by others. “It’s no longer tenable to believe America has always been a place of plenty,” Chaplin said.

The Food+ symposium was organized in conjunction with the Harvard Food Better campaign, a yearlong education and awareness initiative to foster a discussion of the food system and how to improve it. Launched by the Harvard Food Law and Policy Clinic, Harvard University Dining Services, and Harvard Office for Sustainability, the University-wide campaign includes a variety of events and activities that explore food production, distribution and markets, nutrition and health, and food waste.

The centerpiece of the Food Better campaign is the Harvard Innovation Lab’s Deans’ Food System Challenge, which is engaging creative and entrepreneurial students in developing innovative ideas to improve the health, social, and environmental aspects of the food system in the United States and around the world. The challenge, which runs through May, is co-sponsored by Dean Martha Minow of HLS and Dean Julio Frenk of the Harvard Chan School.